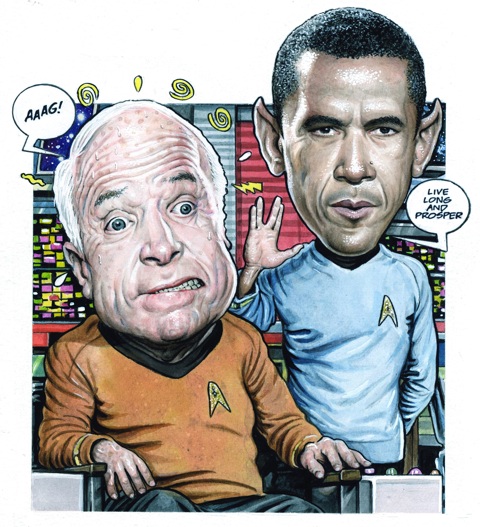 My favorite living portrait artist Drew Friedman painted this incredible piece for a New York Observer article on the "Weirdest Presidential Race of the 21st Century." From The Observer:

"He is measured and stable," said Mr. Nimoy, who played Mr. Spock on Star Trek, and who has supported Mr. Obama since they first met about a year and a half ago at a small Los Angeles fund-raiser. "It's true that he has an intellect that works for him, he handles difficult problems with aplomb. Reliability and stability are very important assets in this race, in these particularly volatile times."

Mr. Obama, as far as anybody knows, does not greet strangers with a cloven V salute, practice debilitating neck pinches, bleed green or have a constitutional incapacity to fib. But his methodical, unflappable style and otherworldly resistance to overt displays of emotion–not to mention his temperamental inability, or refusal, to connect on a visceral level with working-class voters–makes him, by contemporary candidate standards, downright alien.

That's usually not a good thing. Yet, with less than a month until Election Day 2008, the Vulcan is winning.