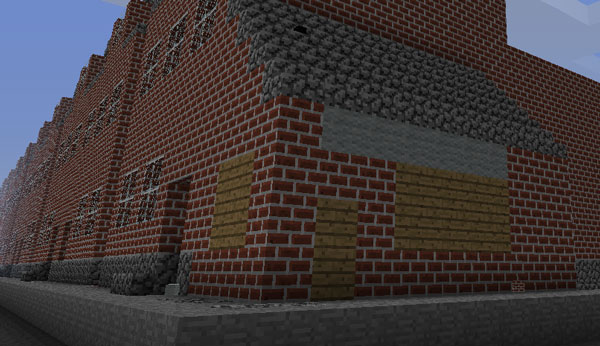 The world of Mojang is full of astonishing creations. I restore the balance.

People are always showing off the spectacular places they've found in Minecraft, or their latest epic creations: a 1:1 scale model of the Starship Enterprise; the world of Studio Ghibli; and vast mechanical computers among them.

But I feel there is a glaring omission here that needs to be corrected: no-one is making anything boring. What gives? Here are a few of the extraordinarily characterless things I have created in Minecraft.

A nondescript street
Welcome to a drab town in northern England. This housing was thrown up to accomodate workers in the late 19th century.

The closure of the shipyards has taken its toll on this once-thriving community. Pictured at the top of this post is the boarded-up corner shop.

A rural strip mall
Have you been to K-mart in the last few years? This one could be somewhere in rural Oklahoma or West Texas. From this angle you can't see the adjacent strip mall, which has an Applebees. It's the only restaurant in town. They keep talking about an Olive Garden, though. Fingers crossed!

A rock
Rockall is a tiny, uninhabitable islet in the Atlantic ocean off the coast of Scotland, covered in bird poo. Here it is in Minecraft.

Do you have any mind-cripplingly humdrum things to show off from your Minecraft adventures?

An Office
BB reader HappySmurfday presents this office, where exposed brickwork and expensive flooring serve only to highlight the ineluctable Ballardian vacuity of the modern workplace.

Derp Towers
Anonymous reminds us of Derp Towers, the 1x1 stacks of some shovelable material built in abundance by people trying to get a good viewpoint of the world. The typical Minecraft multiplayer world is not the creative utopia oft-seen online by non-playing spectators, but a kind of lego vomit "littered with these monstrosities; ruined architecture; floating, trunkless, tree tufts; and featureless rectangular buildings with nothing but an empty chest inside."

Here is one made of sand.