JOHN WILCOCK: When Lenny Bruce Stayed at My Apartment 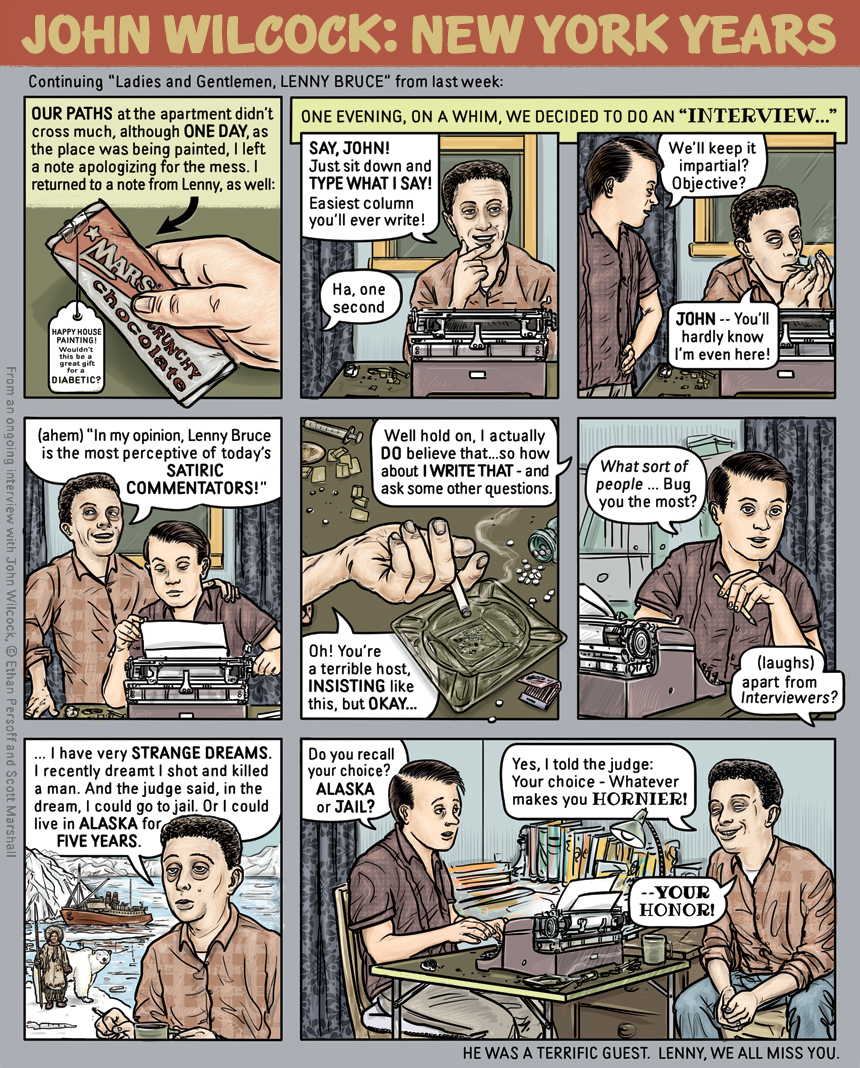 Part Two of LADIES AND GENTLEMEN, LENNY BRUCE, with the story of Lenny's stay at John's apartment during his ten-week run at the Village Vanguard.

Read the first installment of LADIES AND GENTLEMEN, LENNY BRUCE

Excerpt of John's original column on this experience:

A Change of Shirts with Lenny Bruce
June, 1961, The Village Voice

In my opinion, Lenny Bruce is the most perceptive of today's satiric commentators, and he and his audience swing together in a rarely achieved harmony. Lenny just completed a $10,000 engagement at the Village Vanguard, and he's been staying at my place, on and off. I managed to persuade him to answer a batch of questions. He doesn't much care for interviews, so I fired the questions at him one night between shows, put some paper into my typewriter, and recorded his answers verbatim as he shouted them to me while changing his shirt and taking a shave.

How do you feel about working in night clubs?

Naturally the basic motivation of working is profit. A one-nighter pays me what I can make in a week doing 14 shows in seven days. But the whole thing is that I don't develop as much at a concert: I get lazy. Because of ego I want to always get applause. I want to make the waiters laugh. Sometimes I have fantasies in which a customer would say: "He's so clever and inventive," and the waiter would reply: "He's not so inventive. He made that up two weeks ago and he's been saying it every night since."

What sort of things/people bug you the most? Apart from interviews?

Interviews upset me but don't bug me. Tonight I had a woman in the audience with hysterical laughter. As soon as I heard it I knew it would make the audience uncomfortable. I listen to the audience more than they listen to me. Sure enough, they heard it after the fourth or fifth time and the people around her began to get uncomfortable and it spread. Finally somebody told her to shut up and she started crying, which I knew would happen from the first. For humor to be effective the audience must be very relaxed, and anything that interferes with that relaxation bugs me. Anything loud upsets me. Loud laughter, loud applause. To me it projects humility. (Laughs) I'm frightened; that's what it is.

Is there a subject you wouldn't consider talking about in your act on the grounds of bad taste or anything else?

Yes. Subjects that would offend me because they are trite; that have been exploited too many times. Mother-in-law jokes.

Have you ever done any mother-in-law jokes?

Yes, if they are what I consider bizarre or different. For example, Time magazine beseeched Ralph Gleason to use his influence on me so the first-time question in his interview was: "What do you attribute your divorce to?" So I tried to think of the tritest area and I came up with: "My mother-in-law broke up my marriage."
"Your mother-in-law?! What happened?"
"One day my wife came home early from work and found us in bed together."
"In bed together? With your own mother-in-law? Why that's...you're a pervert!"
"Why?" I said. "It was her mother, not mine."

What percentage of your act changes from one show to the next?

Since I have a tremendous backlog, I could do a different show, an extremely different show, every night for about a week, but I wouldn't be creating anything new; I'd just be recalling bits I had already done. From the creative aspect, if I do two shows a night, at the end of the week I've created a new 15-minute bit.

What's a 15-minute bit worth on today's market?

How do you calculate that?

What comedy writers charge -- a television bit, stand-up spot for the Sullivan show, Jack Paar -- an 8-minute bit. The kind of a guy who's an actor-comedian -- performs well but does not create -- buys bits, does them until other, smaller actor-comedian types steal them or he's overexposed the bit. An 8-minute bit would cost roughly $750 - $1000.

What do you do on nights when you don't feel funny?

What do you do to get funny enough to do your act?

What I will do is bare my soul and through this cathartic method achieve humor.

What writers impress you the most, or have influenced you?

No. I love them - W.C. Fields, John Garfield, Jimmy Dean, whom I loved to madness, Eisenhower. But they haven't influenced me.

Do you have recurring dreams?

I have very strange dreams. I'm an egomaniac as it is, and then to have a dream like I had recently that smacked of excellent construction, a beginning, a them, and a sensible end...the dream: I shot somebody with a .22 rifle and killed him. I don't remember the killing; it seems somehow that as the dream faded in I was in court standing before the judge and he was sentencing me. And he gave me a choice of spending five years in the penitentiary with no chance of parole -- the full five years -- or be exiled to Alaska. And that's it. Is that strange? I don't know what Alaska even looked like. Those tall bears; in my dream they were standing up straight.

Lenny, do you have any final message for the world?

Yes. Girls who are celibate wouldn't be that way long if they could only sell a bit.