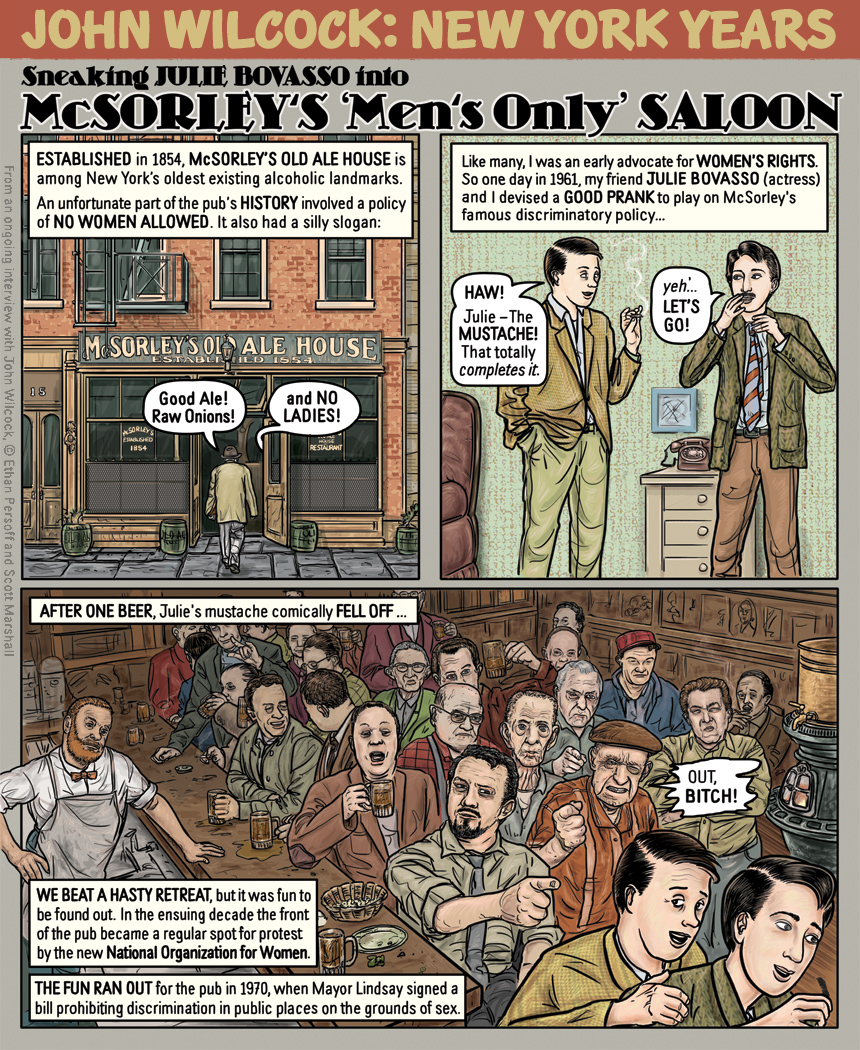 A prank played on McSorley's Old Ale House in 1961, when it was legal in New York to ban women from entering a tavern. By Ethan Persoff and Scott Marshall

John's cohort in this prank, Julie Bovasso, was a noted actress in experimental theater in New York in the 50s and 60s. Modern audiences will best remember her as Flo in Saturday Night Fever and Rita Cappomaggi in Moonstruck.

The Brooklyn Rail interviewed a friend of Bovasso, Rosalyn Drexler, in 2007:

I was friends with Julie Bovasso, who was an actress but she also directed and wrote. A great actress and director.

We met early on when the Feminists began to dance in the streets. I did something I didn’t want to do: I liberated McSorley’s Tavern. I was one of those ladies. [laughs] I felt so bad, because there was an old man at the door who said to me, “why do you want to do this?” I had absolutely no idea. I didn’t want to drink there, I didn’t want to be there. [laughs] And when we went in with Lucy Komisar, the lawyer, I remember saying to ourselves, “what now.” One of us said, “And now we liberate the toilets.” So they went into the toilets in the men’s room to make it a person room, that was the big thing. [laughs] Creating a collaborative shithouse.

NBC: What is McSorley's today? I know you're a last of the line that goes back 116 years and what do you see here today?

Danny Kirwan, McSorley's Staffer/Manager: I think we see a place that's stood for tradition all through the years ... the various owners over the chain of the years have kept the traditions of the people before them and continued on the line. And I think a lot of the people around today appreciate this because there's not too many places of this kind, or I guess there aren't ANY places of this kind in the city where today you can come down and enjoy some of the traditions of yesterday ... where a man can come down and have a few ales and enjoy himself — relax without the presence of women and discuss business or politics or just shoot off at the end of the day and relax themselves and have a good time.