JOHN WILCOCK: Writing the Book "Mexico on 5 Dollars a Day" (Part One) 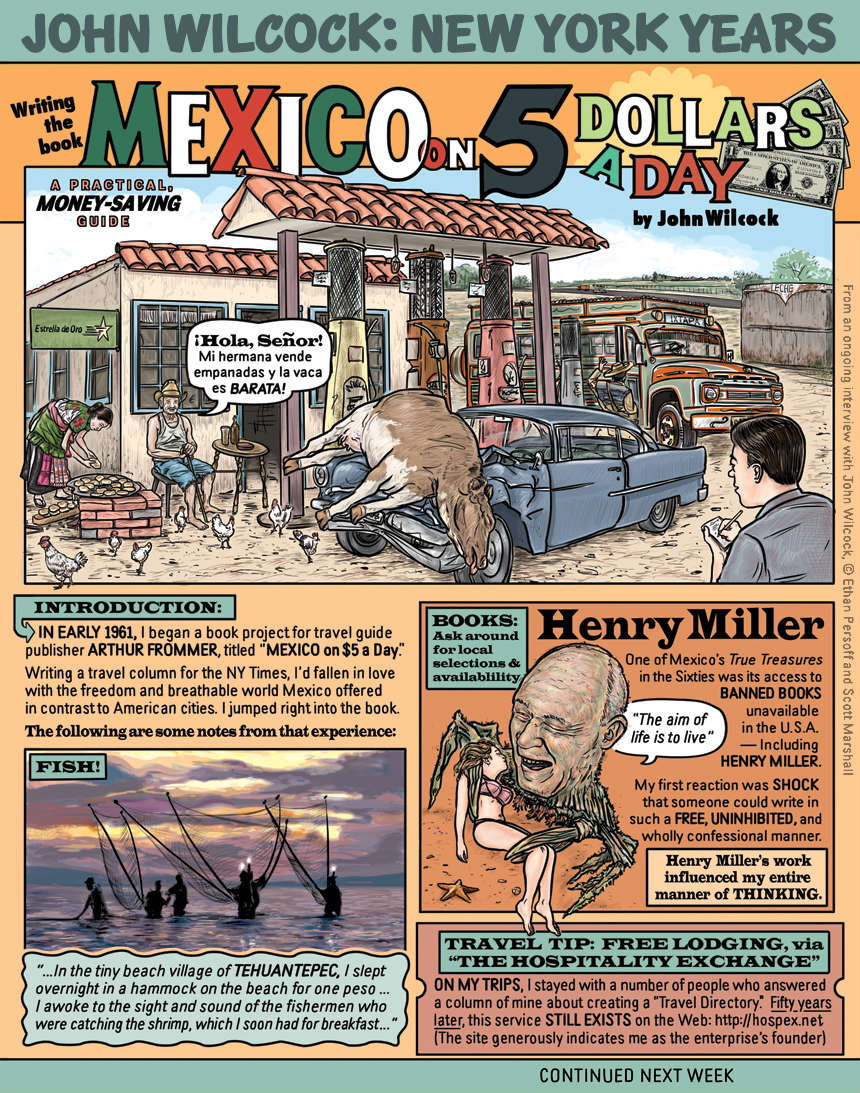 In 1961, John Wilcock wrote a travel guide for visiting Mexico on a budget, resulting in a bestselling book that became a significant part of 1960s vagabond culture. Part one of a two-part appreciation. A comic by Ethan Persoff and Scott Marshall.

In a recent interview, Frommer recalls hiring John for the Mexico assignment:

"I had grown to know a young man named John Wilcock, who was an editor of the Village Voice. A very well-known and excellent writer, who was desperate to travel to Mexico and write a guidebook, and I funded his trip there and published "Mexico on Five Dollars a Day."

(Read a transcript and listen to the full podcast: Arthur Frommer on a Half-Century of Travel)

On the subject of Henry Miller, after returning from Mexico, John wrote the following column for The Village Voice:

Henry Miller is regarded by many as one of the great writers of his time. This attitude is not shared by the U.S. Customs Authorities, who have done their utmost to see that the major portion of his work is not allowed to sully the minds of decent, God-fearing Americans - despite the fact that Miller's books are available in almost every country in the world except his own.

He is not a man who can be dismissed briefly, and it is doubtful if anybody who has ever read any of his "banned" works ("Tropic of Cancer," "Capricorn," "World of Sex," "Nexus," "Sexus," "Plexus," "Black Spring") has not been violently affected by them in one way or another. Better than anyone else alive he is able to inject into his writing a sense of pure freedom - the freedom that is regarded (mistakenly) by the prurient as sexual license. Miller's complete inability to compromise will not allow him to accept the hypocrisies that so often pass for censorship or protection of the "innocent" (where are they?) in America...

With all of the checks, counterbalances, restrictions and diversions that society currently has to distract us, it is difficult to appreciate how much the writings of one man can still affect us, but I have rarely met any fan of Miller who wasn't a fanatical fan. His good friend Frances Steloff of New York's Gotham Book Mart (41 West 47th Street) told me: "I have had people tell me that Henry Miller changed the course of their lives," and I do not find this hard to believe...

Back in 1939 it was Miss Steloff who advanced Miller the money to go to Greece from which emerged the Colossus of Maroussi, and it is her store that has remained one of the few advance outposts against the Philistines and the book burners. Another is the Henry Miller Literary Society whose secretary, Tom Moore has tried for years to persuade Miller to allow an American publisher to challenge the ban and who, at last, is within reach of that goal.

Miler writes occasionally to the society’s newsletter reporting on his whereabouts. He much prefers Europe to America; possibly because, like Lawrence, his affection for his home is obscured by the attitude towards his writing. Occasionally he finds it an obligation to defend himself as with his recent letter to Norway’s Supreme Court commenting on its decision to ban Sexus. Miller wrote:

“To put it as succinctly and simply as possible, here is my basic attitude towards life, my prayer in other words: ‘Let us stop thwarting one another, stop judging and condemning, stop slaughtering one another.’ I do not implore you to withhold judgment of my work or me. Neither my work nor I is that important. What concerns me is the harm you are doing to yourselves, I mean by perpetuating this talk of guilt and punishment, of banning and proscribing, of white-washing and blackballing, of closing your eyes when convenient, of making scapegoats when there is no other way out. I ask you point blank: does the pursuance of your limited role enable you to get the most out of life? When you write me off the books, so to speak, will you find your food and wine more palatable, will you sleep better, will you be a better man, a better husband, a better father than before? These are the things that matter—what happens to you, not what you do to me.”

Some of Miller is available here [in the United States]. The rest must be brought in through an unsympathetic Customs at present, but the time is not far off when you will not have to go outside this country’s borders to obtain them. (—John Wilcock, April 6, 1961)

Finally, as indicated in the comic, The Hospitality Exchange is still around with an active membership. Want to travel or host a traveler?

The Hospitality Exchange is an online traveler's directory of friendly, travel-loving people who offer each other the gift of hospitality in their homes. Members like to travel, be hosted by other members, and, in turn, host traveling members themselves. Each directory listing provides details on that member's interests and the hospitality they can provide. We are not like the huge internet groups that have come into being in recent years; but our group seems to be more conducive to forming long term friendships - our members stay with us for many years.

Soon we will be, amazingly, celebrating our 48th year of bringing travelers together. While we have members in over 25 countries and territories, we are still primarily a North American organization (of our 500 or so members, almost 2/3rd are in the US - in 35 states and Canadian provinces) and we'd like to do something about that. If you'd like to be an 'area-coordinator' for a country with fewer members please let me know and I can send you some materials for this purpose. If you are in the third-world then I especially urge your consideration.

Our roots date to the early '60s when John Wilcock set up the Traveler's Directory, a listing of his friends willing to host each other when traveling. The idea worked well and the concept has prospered. The name was changed to Hospitality Exchange in 1988 and the directory went online in 2007. But we are proud of our heritage as the original directory of travelers providing hospitality.

From an ongoing comic book biography of underground publisher John Wilcock. View previous installments of the John Wilcock comic here and here. - The comic will return next week with Part Two of Mexico on Five Dollars a Day.