Two weeks ago, the DOJ Inspector General released a report on the FBI's use of National Security Letters (NSLs)—-the controversial (and unconstitutional) surveillance instruments used to gather personal information of Americans without any prior oversight from a judge. In a little-noticed passage buried in the report, the IG describes how NSLs have been used on journalists in the past, and indicates that the FBI can currently circumvent the Justice Department's media guidelines to do so in the future.

When and precisely how can they do so? Well, apparently that's classified.

First, some background: In July, after a torrent of criticism that the Justice Department (DOJ) was targeting reporters in the wake of the Associated Press and Fox News scandals, Attorney General Eric Holder issued new guidelines for DOJ that tightened the rules for when they could secretly obtain records from reporters. Notably, the guidelines excluded National Security Letters.

This is critical because past IG reports, as well as the new one, have harshly criticized the FBI for circumventing the old media guidelines and using NSLs to gain access to reporters' records on at least three occasions. Earlier this year Pulitzer Prize winner Barton Gellman revealed his telephone records had once been targeted by an NSL.

As the New York Times reported when the new guidelines were issued in July:

There is no change to how the F.B.I. may obtain reporters' calling records via "national security letters," which are exempt from the regular guidelines. A Justice spokesman said the device is "subject to an extensive oversight regime."

What is the "extensive oversight regime"? The IG report discusses it, but the FBI has brazenly redacted the whole thing. From page 178 of the new report:

The above passage is referencing the FBI's response to the IG's criticism of a leak investigation in which a journalist's telephone records were accessed with an NSL. 28 C.F.R. § 50.10 refers to the media guidelines. Reading between the redactions, it seems that Attorney General approval may required in some classified circumstances but not in others. The FBI thinks those circumstances should be secret.

Worse, it seems the FBI has so far ignored another IG recommendation regarding the use of NSLs against reporters. From page 192 of the report: 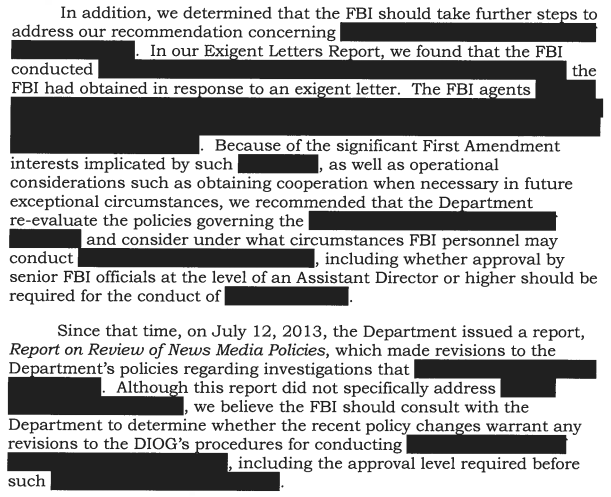 Unfortunately, the redactions in this section make it nearly unintelligible, but it's clear from the reference to the DOJ's media guidelines in the second paragraph that they are writing about leak investigations and journalists.

It should be noted from the very first footnote of the 196-page report that the IG strongly objected to many of the redactions within the report, including both information that was made public in previous reports and information they "believe is important to the public's understanding of the FBI's compliance with NSL requirements.

And that's the crux of the issue: how can the public be expected to have confidence in a so-called "extensive oversight regime", without any transparency or inkling of what it is? All too often the government has expected us to trust that such authorities are not being abused, while their own investigations continually uncover problems with compliance.

Beyond the fact that the whole NSL statute was ruled unconstitutional last year (the ruling is on hold pending appeal), journalists—at the bare minimum—deserve to know when the FBI thinks it can secretly conduct surveillance on them without court approval. As the IG states, this has significant First Amendment implications and it's a travesty that the FBI continues to keep their policies for spying on the press a secret.