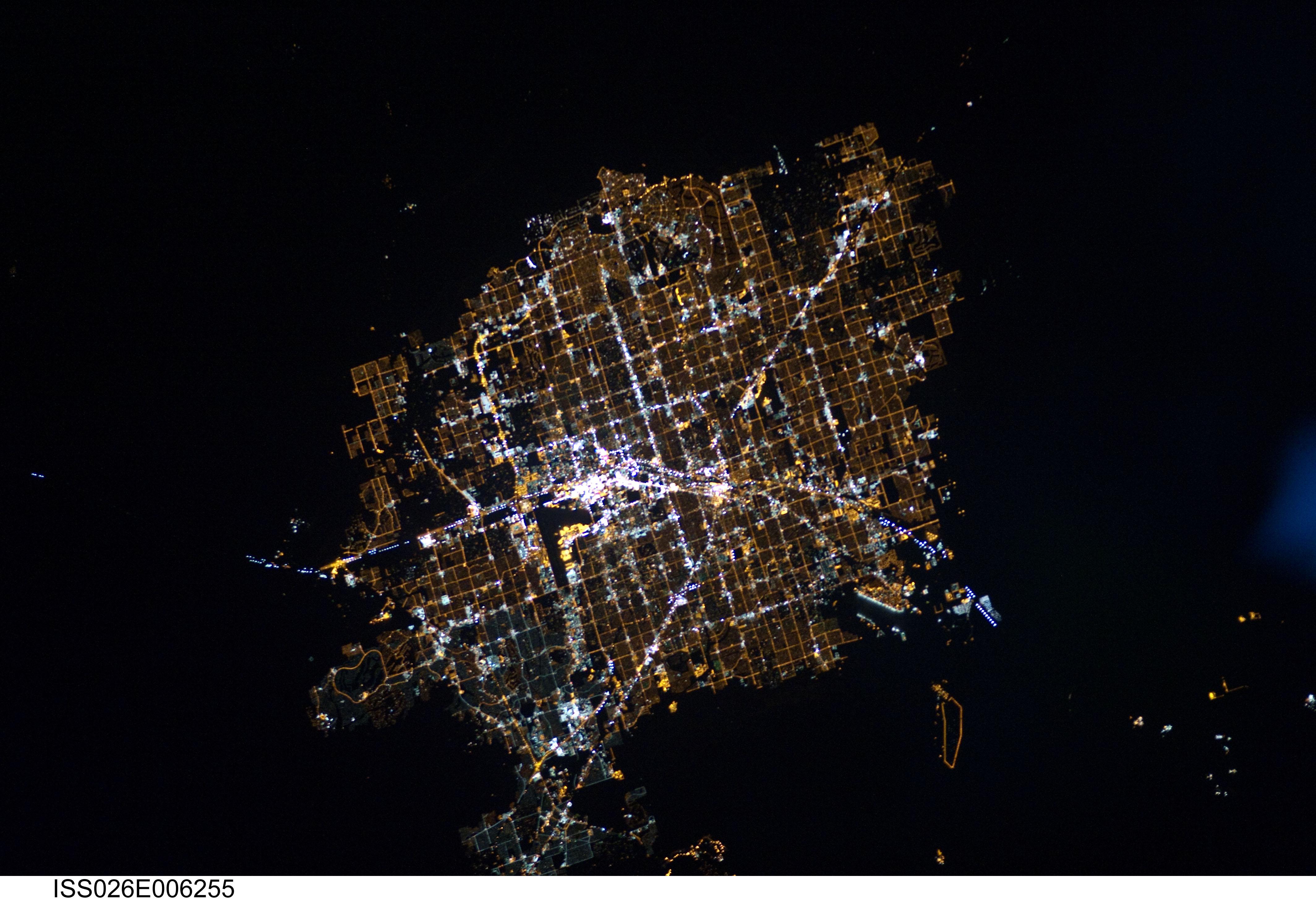 You might recall an image release in 2012 of the Earth’s lights at night. Called Black Marble, the popular image was generated as a composite image from the best images by the taken over several months by NASA’s Suomi-NPP Visual Infrared Imaging Radiometer Suite (VIIRS). The instrument, according to NASA’s website, “detects light in a range of wavelengths from green to near-infrared and uses “smart” light sensors to observe dim signals such as city lights, auroras, wildfires, and reflected moonlight.”

Black Marble is a pretty image. It shows the light emitted by people, but it doesn’t give us a sense of how or why we are using it. So, Miguel Roman and Eleanor Stokes set about creating a dynamic understanding of human behavior at night around the globe.

They took over 3 years of Suomi-NPP VIIRS data over major urban areas in North America, the Caribbean, and the Middle East, and developed algorithms to get rid of view-obstructing clouds, correct terrain errors, correct for atmospheric effects, and to remove light contamination from the moon, fire, and stray light. Overall, they focused on daily changes in lighting at the country, city, and neighborhood scales during the holiday season as compared to the rest of the year.

The result is visually dramatic. During the holidays our activity patterns change. This in turn changes the location of demand for energy services. For instance, in big metropolitan areas, lighting increases in predominantly suburban, residential areas. This is likely because people are leaving work earlier and going home to turn on lights. Also, McMansions require more light to illuminate with festive holiday lights. Interestingly, urban centers increase only slightly when compared to the suburbs, which is probably related to the fact that urban areas are more illuminated at night generally.

Further, Roman suggests that the “EKG” of a city can be measured and analysed by looking at the daily changes over time. Creating that graph over time demonstrates that there is a definite cyclic change in light requirements during the holidays. And, while the Bay Area’s signal is strong, there are many days that just could not be measured as a result of cloud cover.

Some cities can’t be measured at all during certain parts of the holiday because of snow, which creates something of a blind spot for VIIRS because of reflectance. Across the U.S., the team compiled data from 70 cities, and found a spike in lighting during the holidays.

Conversely to much of the U.S., in Puerto Rico nighttime temps are often high and promote festivities late into the night. Also, it is a cultural tradition to keep the Xmas lights on through January 20th. These behaviors come through loud and clear in the light data.

The Middle East has better climate for monitoring light behavior what with less cloud cover for most of the year. Also, the holy month of Ramandan offers a counterpoint to the western holiday tradition, which shifts their activity later into the day as a result of daytime fasting (which causes them to eat later). Night prayer lasts all night long, and nighttime temperatures are also higher than what most of the U.S. experiences during Christmas

While the pattern are distinct from those in the U.S., patterns are still visible. Cyclical increases in light use occur definitively in conjunction with Ramadan, and are in the city centers rather than suburbs. In Saudi Arabia there is a strong signal, whereas there is no signal in Israel. This difference aligns with cultural differences of the people in the regions.

In Iraq, a negative cyclical trend was observed, which can be linked to the vulnerable electrical infrastructure in the country. Negative trends were also observed in Syria and Damascus following major military confrontations. Moonlight is what left after power is taken away, but the algorithm used for the analysis removes light from the moon, resulting in the negative trend.

In Egypt, community power use correlates with socio-economic variables. Celebration of ramadan is indicative of how much money people have in different neighborhoods/geographic areas. However, it is apparent that everyone celebrates the end of Ramadan.

Visualizing this light data highlights that activity is driven by the things people want to do. This leaves an imprint in the energy use itself. As energy prices go up, these patterns can be used to supplement energy efficiency efforts, as well as help to guide future climate mitigation measures.

The hope for future of this research is to be able to take multiple measures per day over multiple parts of the light spectrum. Because the VIIRS nighttime channel begins at the red edge of the spectrum and goes into the infrared, it is very difficult to see anything below about 490 nm in wavelength. Making lights more efficient will make our lights (as seen from space) look dimmer, and our activities less visible to ourselves.