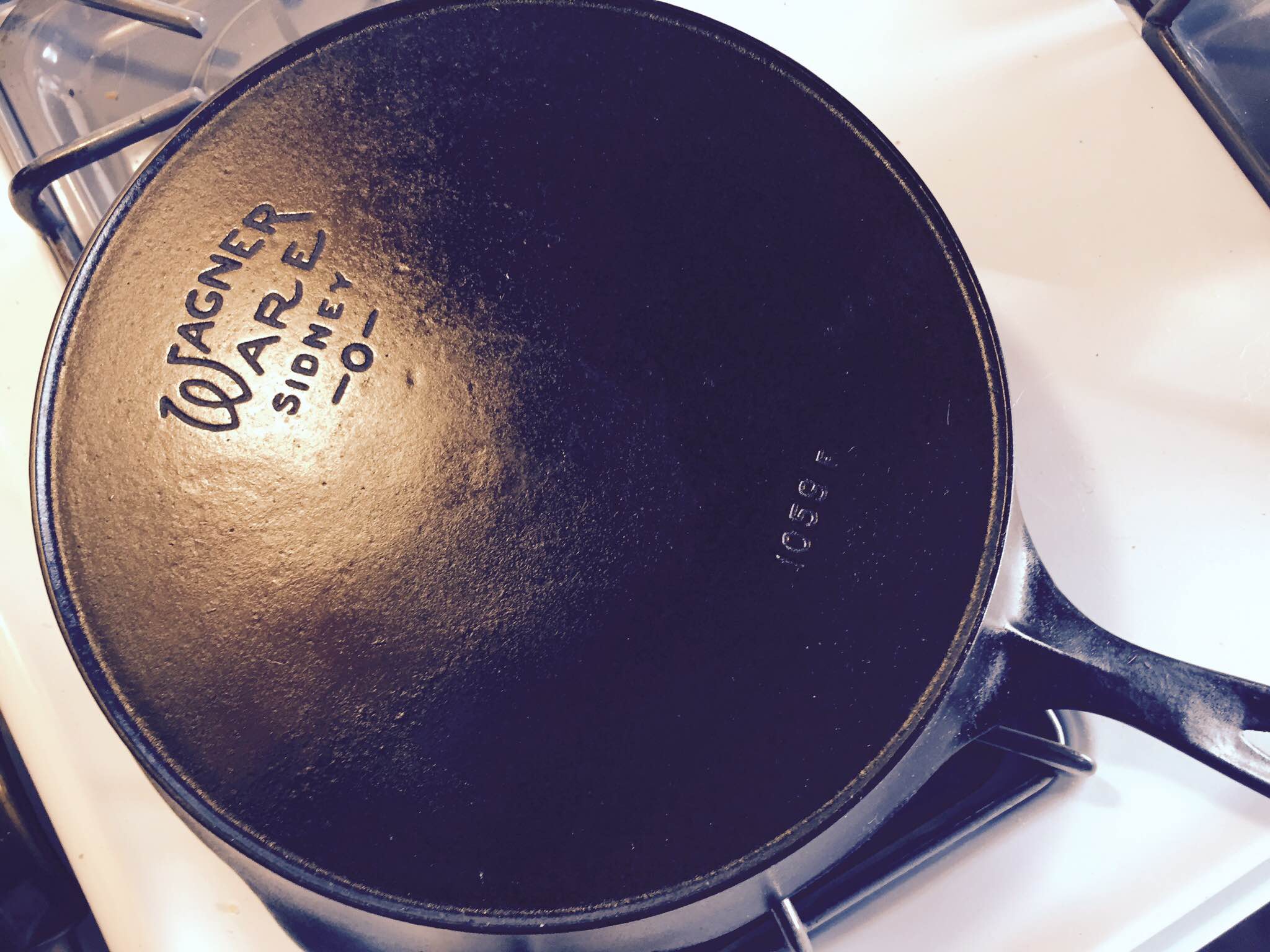 I bought some, and the results surprised me.

We've all heard tales of antique cast iron's supremacy in the kitchen. My Lodge cookware is five to fifteen years old. I love it so much. But could even older stuff be that much better, as you're likely to hear from its proponents?

Last week I wrote a brief review of a scrubber I use on my cast iron cookware. The response in email, Twitter, Facebook, and our Boing Boing BBS was interesting. Some gave the expected "OH MY GOD YOU'LL RUIN EVERYTHING!" And some people I know and respect pointed out, incredulously, my use of current era Lodge cast iron.

In the late 19th century through early 20th century, there were many manufacturers of high quality cast iron cookware. Cast iron was affordable, cooked really well, and is virtually indestructible if treated with common sense care. Griswold, Wagner and many, many other brands and manufacturers exist for collectors to hunt and debate over which was best.

Antique cast iron was thinner than todays form factor. After casting, its inner surfaces were smoothed down, unlike todays. Some say there was a better formula for the iron produced in that time, and that this formula has since been lost. But I can find no proof of this.

It's not light, but I do think antique cast iron is far more elegant than its contemporary counterpart. Today's stuff is thick and the cooking surfaces are pebbly. This finish is great for my wok and dutch ovens, but it takes a lot of seasoning to make a frying pan pancake-friendly.

So, here I was cooking along merrily, with my awesome set of Lodge stuff, happy as a clam and not knowing what I was missing. Your comments and public taunting led me to believe I may be missing out. I decided I was going to go find as rough a looking antique pan as I could, restore it and compare the two.

I'd already read Sheryl Canter's fantastic pages on cast iron seasoning so many times, and anticipated such wonderful results from antique iron. I wanted these pans seasoned RIGHT.

I found a great deal on a set of Griswold skillets in very useable sizes (3, 7 and 8), but they were far too clean for this post. Then, at a local thrift shop I found an awesome WagnerWare #9 skillet, complete with a smoke ring and reenforced handle. Honestly, I don't know why (aside from dating the piece) these things are notable, but in reading the one true source of all knowledge, internet forums, it seems they are important.

It was a fucking mess.

Having read those very same internet forums, I decided the method I'd use for stripping the pans is, if you have a self cleaning oven, the easiest one. Simply run a cleaned and scrubbed as best you can possibly manage pan through one self cleaning cycle, then let the pan cool for a few hours. Remember to remove your oven racks if you are afraid to discolor them, and use a brick to keep the pan off the heating elements. There is plenty of debate about the safety of this practice but I decided it was fine. The melting point of cast iron is much higher than that of my oven. If the pan cracked or split it was already damaged. Cleaning the pan off before running the oven, however, may remove some reactive material, reducing the volume of smoke that'll need to be vented from your oven and also reducing the chance of flames in the oven from baked on crud. You'll vent some smoke.

Some heavy scrubbing with a stainless pad removed the rest of the ash and rusty discolorations. I then coated the pan incredibly lightly, with flaxseed oil, buffed it off, and set the skillet in the oven allowing it to heat up to 500ºF and then sit there for an hour.

The top photo (and one below) show off how great the pan looks after 5 cycles. I kept going to 7 and then decided it was time to test the pan.

Longtime Boing Boing friend Kent K. Barnes told me I had to use a bacon test to verify my seasoning. I asked him what this test was and he said frying scrambled eggs in bacon fat. The GIF below shows my daughter's breakfast egg being prepared this morning. It cooked incredibly well and was supremely non-stick.

I've also used the Griswold skillets to make a recipe from the Mary and Vincent Price cookbook, Émincé of Chicken Tetrazzini Au Gratin, and they cook incredibly well. The thinner walls heat faster. The smoother surfaces allow for easier non-stick operation. I already like these antiques and am sure that as the seasoning becomes less applied and more one with the pan that they will eclipse the Lodge stuff I have.

I do not know that the difference is so magical that anyone needs to run right out and swap from current era Lodge to antique Griswold with a slant-patterned logo. Keeping an eye out for bargain pieces and cleaning them up will result in a collection of superior cookware, however.

If you want to hunt for some antique cast iron cookware, I suggest searches for Griswold and Wagner on eBay or Craigslist. Combing local thrift shops worked well for me and that Wagner pan was $7.50. I have my eye on the beautiful hammered Griswold chicken fryers.