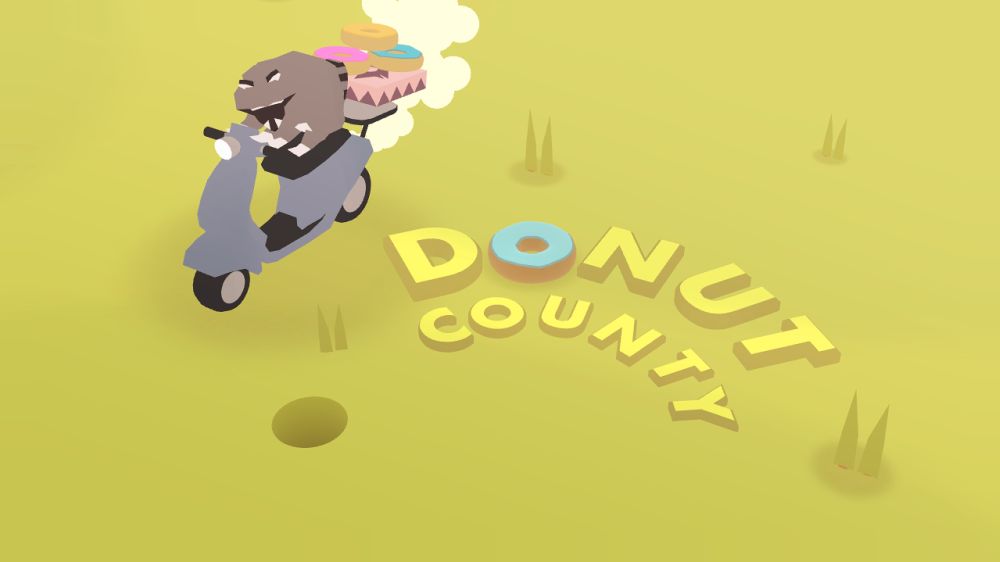 Ben Esposito's Donut County is a strange, beautiful little game about holes that get bigger when you fill them, navels of the land that swell until first flowers, then bushes, then lawn furnishings and entire buildings tumble listlessly in. You, the player, just make the ground open up beneath it all and swallow it up, until you're left with nothing but lonesome landscape, hushed colors.

You play as a hole, basically. Usually when we talk about "perspective" in games, or whose voices are being represented, we think about characters and identity politics. But there are so many games where there are no 'characters' at all, so to speak, and although this is one of them, there's something about the act of being a hole in Donut County that feels as thoughtful and political as it is guiltily simple, joyful.

It sounds like a joke, what if you played as a hole in the ground, the kind of prompt spouted by a parody of a designer. Donut County surfaced from a 2012 game jam of supposedly-ridiculous ideas -- "I don't think anything is 'just a joke,'" Esposito tells me. "Except puns."

Donut County begins at a quaint roadside diner, compelling the player toward the iconic pastry. The shop itself, says Esposito, is "not-so-loosely based" on the landmark Randy's Donuts. Esposito moved to Los Angeles in 2011, and says its colors, textures and foliage still feel novel. It must have been a pleasure to draw them, knowing that their shapes and movements make the player hungry, eager, to tumble them into the swelling void.

"LA is a city of images. Palm trees are symbolic -- they’re not even native to the area," Esposito says. "Life in LA is especially influenced by its image in media: Public policy is influenced by film & television (like the corruption and racism of Noir). LA constantly creates new images for itself and forgets the past. Disneyland is kind of great example of this -- it’s like an imperialist virtual reality, using nostalgia to paint over the past." Esposito says he loves Disneyland and has an annual pass, if I want to go sometime. I suddenly want to.

Interestingly, Donut County began life as a different kind of tale about appropriation and assumption -- despite warnings, Esposito was once insistent on making a game about "Hopi folklore" called Kachina, eager to prove that research could combat ignorance when doing work about other peoples and cultures. Ultimately he learned an important lesson he now readily shares; I think it's fitting that Donut Country is still, in its way, a game about what America thoughtlessly swallows.

"The hole embodies this idea of erasing the past to make room for the new," Esposito suggests. "That’s why I think LA is such a good fit for this game. Each level is a theater, a little stage to carry out the work of forgetting."

"Game makers don’t have established tools for hitting those emotional notes," he continues. "We don’t think about our work from an emotional place, which limits us so much. The hole is an emotional mechanic, fundamentally... more importantly, the hole is magnetic. It’s enigmatic, it's simple. It’s so elemental it cannot be ignored. It asks questions rather than answering them."

There is something compelling about being the hole, and growing. It's guilty fun, devouring the world in volume, and living things with it. "I’m not really trying to challenge players on a deep intellectual level... there are plenty of games that can offer that," he says. "I’d rather it be a conversation about specific objects and spaces. The goal of every level is to swallow everything, and while it does get slightly more complex over time, it’s never really about the conquest of 'beating' a level."

The landscape changes based on the areas you and your gaping appetite clear -- Esposito alludes to consequences for, say, the donut shop if you guzzle the entire river. "The narrative is about the slow process of erasure in Donut County and what happens when there’s nothing else left to consume," he says. "That’s all I’d like to say about it before someone plays it.

Donut County will be out on PC and Mac later this year. Meanwhile, learn more about Glitch City LA, an independent game-making collective Esposito co-founded, here.