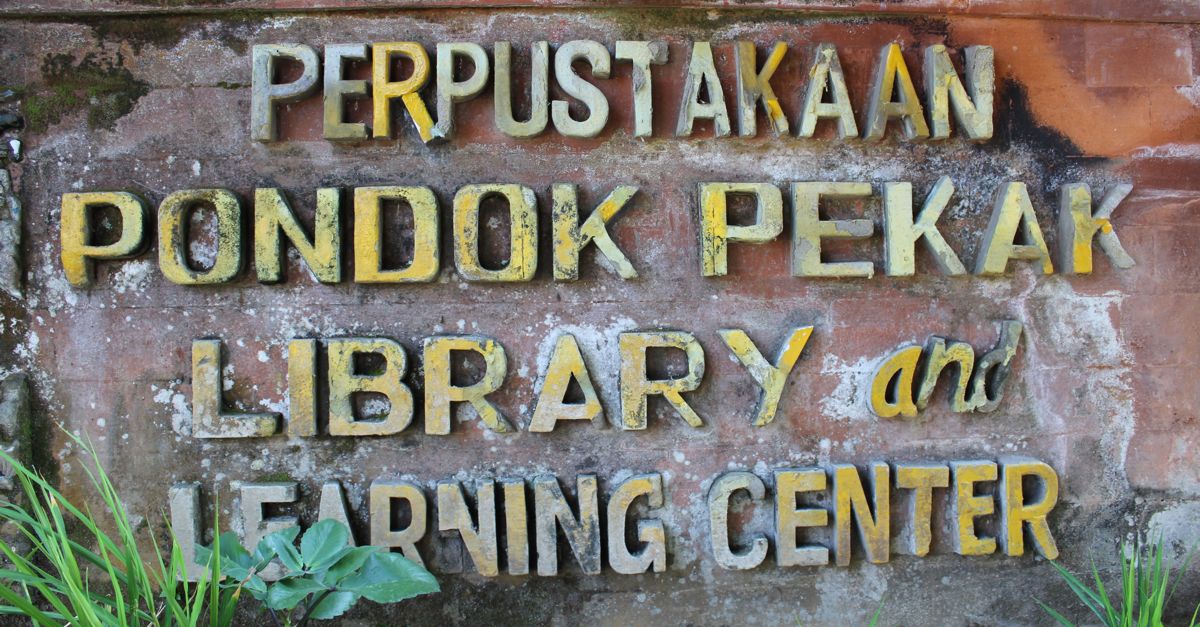 To many people, the village of Ubud in Bali is either a place for Eat Pray Love-style spiritual awakenings or Bintang-binging nights on the town. But neither of those was really our family's scene. Instead one of the things we enjoyed most about our 18-day stay in Ubud was visiting the Pondok Pekak Library & Learning Center.

Pondok Pekak, which means "grandfather's little resting house in the rice field," was first opened in 1995 when American expat Laurie Billington, who believed that every town should have a library, and her Balinese husband Made Sumendra built a small library on Made's ancestral land.

Nearly 20 years later, Pondok Pekak can be found in the center of Ubud village, just east of the football field on Monkey Forest Road. Laurie passed on in 2009, but Made continues to operate the library, keeping Laurie's legacy alive.

Even though it's a small library by most standards, it has a lot to offer those of us who still love paper books. I found it very easy to lose track of time as I browsed the shelves and uncovered many interesting reads. It even has a copy of Tom Neale's An Island to Oneself.

The books at Pondok Pekak can be rented, bought (though not all books are for sale), or even read right there in the library's open-air reading room on the second floor. Anyone can become a member of the library and get unlimited access to the library's inventory for a month (50,000 Indonesian rupiah, about $4 US) or a year (250,000 rupiah, about $20 US). They also offer daily rentals (2,000 rupiah a day with a 3-day minimum).

But despite having a great selection of reading material for tourists and locals alike, Pondok Pekak is much more than a library. It also offers many different learning opportunities, including classes on the Indonesian language, Balinese dance, wood carving, painting, how to make canang sari offerings (which are everywhere in Bali), fruit and vegetable carving, how to play gamelan (a traditional Balinese orchestra), and more—like the silver jewelry making class my wife and daughters took one afternoon. And the prices are much more reasonable than at some other places.

On top of all that, Pondok Pekak offers free Wi-Fi and a place to fill up your water bottles, too. So if you're visiting Ubud and want a serene place to escape for a while or to learn something new, head on over to this fabulous little library, tucked away in a quiet corner just east of the football field.