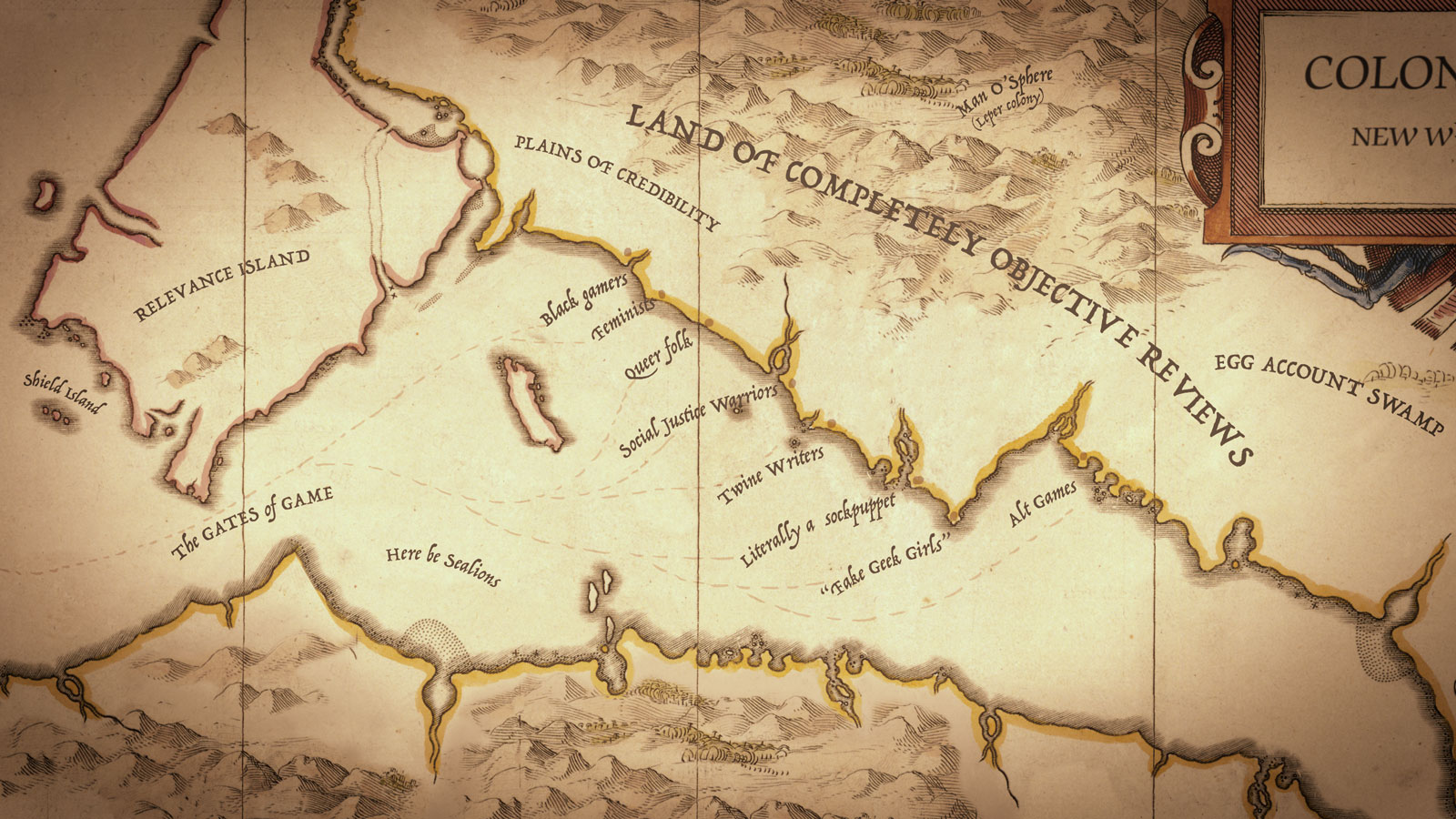 Minority voices in games and tech present a necessary challenge to our imagined community.

In a recent Playstation television ad, we see some of Sony's most popular heroes—Solid Snake, Nathan Drake and Kratos—gathered at a bar, telling war stories about a man they call only Michael. They name him the hero and savior of their greatest battles, and raise their glasses to his portrait: an image of a young white man, holding a Playstation controller.

The camera hangs reverently on Michael's face, before panning out to reveal a sea of other gamer portraits. But Michael is presented to us as the prototypical "gamer," the accepted idea of what a person who plays video games looks like, at least in the world of mainstream games. "You belong," this ad is saying, to people who look like Michael. "This community is yours. Here, you make the rules."

For decades now, companies have been selling the idea that playing video games places you in a special fraternity of people with similar interests, goals and values, even if those values are as small as "enjoys video games." Ads like this are designed to make Sony's customers feel like a chosen, special people, to generate a fiction of belonging that trumps everything else. In his book Imagined Communities, professor and author Benedict Anderson described this kind of broad, horizontal camaraderie as the source of nationalistic fervor, the sort of thing that makes people want to "die for such limited imaginings."

Gatekeeping is not a new trend in games, and much of it revolves around this imagined community of players—what we think a someone who plays video games does or does not look like, and whose pictures belong on the wall. When Anna Anthropy released Dys4ia in 2013, the conversation centered around whether or not it was really "a game" at all. Maddy Myers, the assistant games editor for Paste, had a colleague refer to her work as "gender stuff". Less than a month ago, the Hearthstone community was wrapped up in an "investigation" of whether or not the player MagicAmy has a man play for her.

For many of the people policing the imagined community of games, the influx of new voices is misperceived as sort of "digital colonialism," where some people are "natives" of the internet and gaming culture, while others are invaders, unwelcome interlopers and newbies. Now that marginalized people are more present and visible in spaces like eSports, journalism or online discussion, many of the Michaels of gaming culture believe that they're witnessing a seizure of resources, or an attempt by outsiders to co-opt their culture or hold it captive.

I spoke with a professor of postcolonial literature—my mother—about the definition of colonialism, which is very particular and specific: It means the seizure of land, then its resources, and then the co-opting of those resources to the captive market of the colonizer.

It may be tempting to make a metaphor about this process when one sees one's subculture changing. It's easy to imagine a newfound influx of women, people of color, and queer people in a space that has been narrativized as belonging to the straight white male as a "seizure of land."

On the phone, though, my mom was fascinated by what I'd asked her: Are there "natives" to non-physical spaces? Are there natives to fandoms, and is there a cultural space at stake when those niche cultures expand? Firstly, she told me, physical space is finite. The British quest for empire involved claiming land and either eliminating or subjugating their native peoples.

On the internet, of course, people in fandoms can literally just go somewhere else. The internet is infinite, as are the communities that spring up around gaming; there's enough for everyone, and as games diversify, it's easy to imagine that soon there will be a game for everyone, too. From a purely capitalist perspective, creating a product that appeals to as many markets as possible has a good thing. The market isn't shrinking, changing focus or expelling anyone—it's growing.

My mother also told me that that the most significant difference between colonialism in history and colonialism as it's described here is race. My mother and father were both bodily displaced by colonialism, my grandfather born under British rule. Is anyone, least of all white men, actively being displaced in fandom or in online communities? Is there a white male diaspora of gaming culture on the internet, are they creating actual microcultures in foreign lands as their own is taken away from them?

Obviously not—the historical precedent of colonialism feels like a good metaphor, but colonialism's lasting effects on society at large mean more than just, "The thing I like no longer feels like it is mine." It was always yours. It was always everyone's. It's just that now more of the 'everyones' are claiming their seat at the table.

Colonialism historically removed power from minority groups, stripping them of their homes and cultures. But no matter how many thinkpieces on gender and race and sexuality in games get written, there will be a new Call of Duty every year. For every Twine game, there are thousands of bros who will buy the next hot AAA release without reading a single review.

This is all true of broader media as well. Black Cinema in the '90s didn't kill Hollywood, and if it had, this Oscars season might have looked significantly different, and Spike Lee wouldn't have to fund his films through Kickstarter. In the '90s renaissance of black sitcoms, did Friends or Seinfeld go away?

Way back in 1855, Nathaniel Hawthorne described the growing number of female authors as "a damned mob of scribbling women, and I should have no chance of success while the public is occupied with their trash… Generally, women write like emasculated men, and are only to be distinguished from male authors by greater feebleness and folly."

Despite Hawthorne's opinions, women continued to write. The novel as an artform didn't die—and we all still read his work, too. When marginalized voices come to take their seat at the table, there will always be an outcry that they are invaders, colonists, inferior versions of their straight, white male counterparts. But rather than killing artforms, the addition of marginalized voices often helps ensure that they stay alive.

Journals like the Arcade Review, writers like Austin Walker, game developers like Alpha Six Productions are not asking to displace the games communities that exist, but to converse with them and to keep them from stagnating. If minority voices do not participate in an artform, where, exactly will that artform go? How will it be challenged and provoked if there are no workers to do the challenging and provoking?

Where would avant-garde cinema be without Maya Deren, whose authorship of her own work was challenged—as women's authorship is almost always challenged? If the current Fine Arts climate can support both Kara Walker and Ryder Ripps, I am sure gaming can handle both Merrit Kopas's Hugpunx and EA's Battlefield: Hardline.

The same corporations that sell us the idea of gamers as an imagined nation are experiencing a wave of diminishing returns on their franchises. What we see in gaming right now is not colonialism, but evolution: the changes that need to take place for the art form to survive and thrive. Rather than imagining games as a community of chosen people whose integrity must be protected, everyone must take a broader view of the form and the multitudes it already contains.