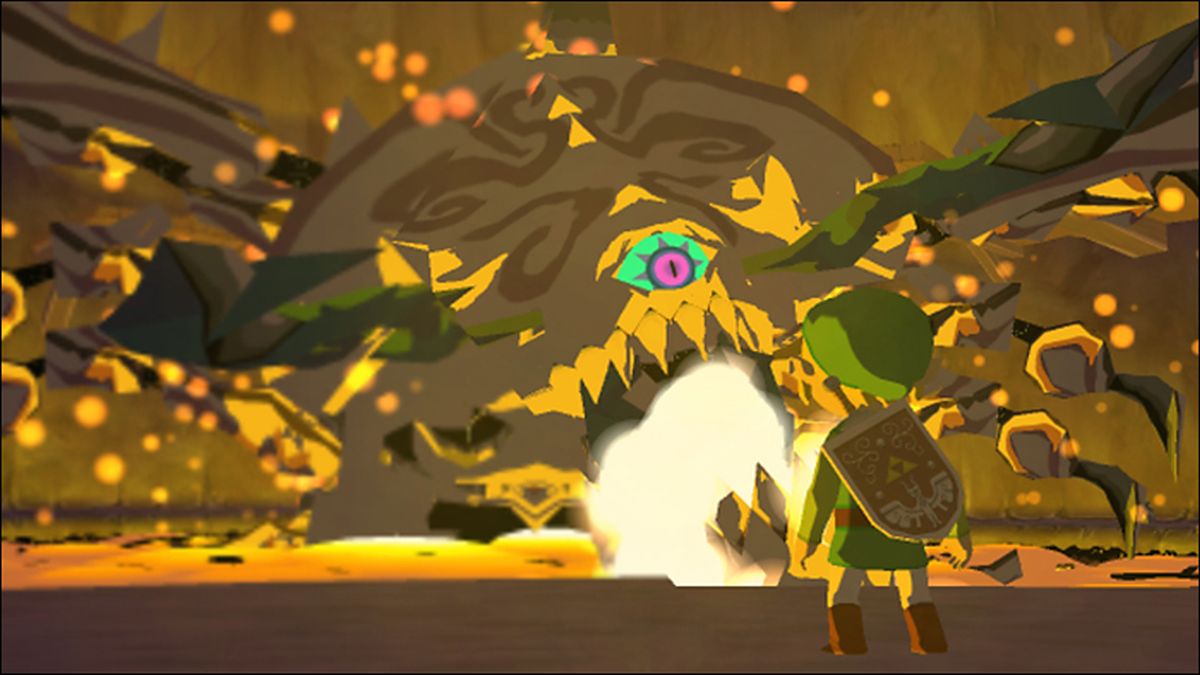 We often understand failure in games through the language of death. Why?

I have a childhood memory: in The Legend of Zelda: Wind Waker, Link ascends a staircase. The candles in this space are glowing softly, and I can see a monstrous form at the top of the stairs. I know I am supposed to fight him.

My heart starts racing. My palms are clammy. I don't want to fight, I want to escape quietly in the dark of night. I go back down the stairs, out of the castle, back to my boat.

I had been enjoying the game -- my brother bought it for me, for the GameCube my parents got me. They were both truly mine, for the first time. The world was bright, fresh and clear, and I hadn’t been as frustrated by its controls as I was by the more technical games my brother liked. But I hadn’t been especially good at this game, or any of them.

I was a child. To fight that thing meant I was going to die, to fail. In life, I got up and turned off the console, went up the stairs to my bedroom and laid down on my bed.

A few years later, I got a C in math. I was never particularly good at math, and I’m lazy even to this day, preferring to spend more time on things I’m already good at rather than to develop new skills. The letter from the school had arrived while I was in the car with my father, and he opened it, sitting silently in the garage.

He turned to me and said, “Well. You might as well just drop out of school. Start working at McDonald’s.” We didn’t talk to each other for a few days. I felt like a ghost in my own house.

My freshman year of college I got an invite to a Facebook group. It was a memorial group for someone I had known my whole life, more a brother than just a friend. I posted, “Is this a fucking joke?” and someone replied, “No. Unfortunately, Matt died.” It was a heroin overdose. We still don’t know if it was intentional or not. I do know that his father had to break the door to his bathroom to retrieve his body.

In games, we have the term “fail state” -- a point when it is clear that you have lost, have not achieved the conditions necessary for “winning.” Some people say that’s a defining characteristic of a “game” in the first place, but I’m not sure I like that idea. I don’t like when failure equals death.

After the release of Bloodborne, my friends shared their screencaps of the game, large red text spreading across them: “YOU DIED.” I won’t be playing this one; nothing makes me more anxious. I remember walking Link up the stairs in Wind Waker, feeling as if I was sending him to his grave.

I wonder how seeing yourself die -- because your avatar is you, in a sense -- changes how we see our failures in our own life. That C on my midterm review, and every C thereafter, were not things I could learn from. They were end of that timeline. If I can’t achieve excellence, why continue to try at all? Every time I die in Persona 3 -- a game where death is frequent and often unexpected -- I put it down for at least a week, angry at myself for not being prepared. Last night, my sim in The Sims 4 failed to put out a fire and burned to death. It makes me wonder, should I even be playing these games, if I can’t even keep myself from dying? Do not die: The minimum thing these games are asking me to do. If I can’t achieve that, why am I even playing?

My first year of college was a mess, academically. I was just happy to be out of the suburbs, far, far away from home, to be making friends and having my own schedule, smoking weed and drinking when I wanted. When I went home for winter term, I was almost ashamed. Did I deserve to be in college, if I was getting Bs? Did I deserve to be in college and doing poorly, when Matt wasn’t even alive, wouldn’t have the chance to even try?

I thought a lot about taking time off, talked about it with my brother. He said that he knew people that took time off because they’re felt inadequate, or sad, or needed to be out of school, and when they came back, they weren’t necessarily better. Two years later, I got an A+ in a class. It was the hardest thing I had ever done, to accept my past failures as part of a journey to become a better academic, a better person.

When you die in a game, no one is there to tell you how your work could be better. You’ve simply failed. People tell me you learn the rules of games like Bloodborne. Articles promise me the game itself will teach me how to improve, but I don’t believe them. Every failure brings me no lessons -- just shame and humiliation. Ridicule from other fans, even when I succeed.

Is this really learning? Or is this being hammered down, until you give up a part of yourself?

Later in my life, my father apologized to me. He admitted he was too hard on me as a child, that he felt he made me afraid to try new things. He thought he had instilled in me a fear of failure so vicious that I would never allow myself not to be good at anything.

He was right. It’s taken me my entire life to accept that failure is allowed, that it is natural.

I think it’s dangerous that games pair the evocative imagery of death with the concept of failure. It makes failure absolute, unfixable, without offering a course from which to grow. The only solution you’re given is “just be better”, without any idea of what “being better” will offer you as a player, as a human.

The first time I came to my advisor for my senior project in college he told me he was almost angry at the amount of sources I was using. In the next sentence, he told me that I already had all my materials, that I was already there. I know now that in the first level of Wind Waker that I already had what I needed to get the job done. But if I had died, what would I have known, other than my failure?

Before Matt died, he wrote poetry and sent me emails and talked with me as we skipped our study hall to go on long walks through parks. He was smart, certainly smarter than me, and genuinely kind. Matt’s life was worth something. I don’t think the message YOU DIED tells you what life is worth.

In my sophomore year of college, ny father drove me out to school alone, and after the last box was unpacked, after we had gone out to dinner he stood with me behind my dorm, under the trees, and he looked at me with tears welling in his eyes. He said, “I’m proud of you.”

He said, “I couldn’t have asked for a better daughter.”

I know he still remembers all the Cs, all the times I let him down, all the times I could have done better but didn’t. The times I failed. I cried when I walked up the stairs to my dorm room. I laid down on the scarf Matt’s mom knitted for me, and I cried for the rest of the evening.