Castlevania: Symphony of the Night is forever 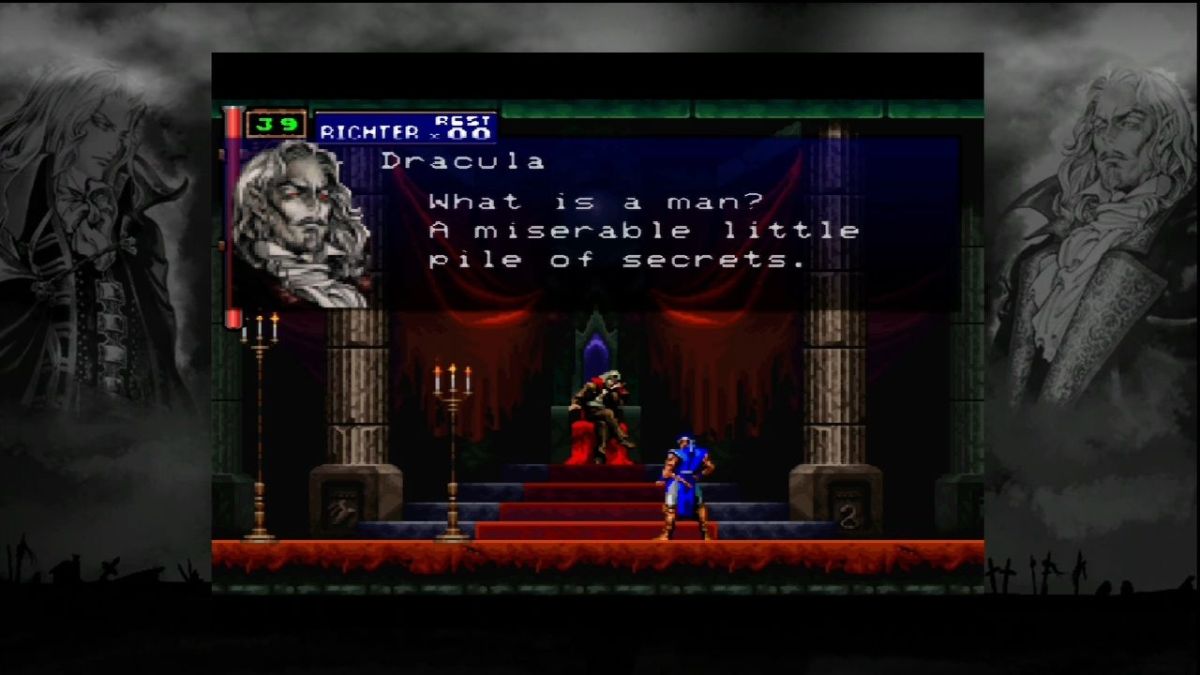 Castlevania: Symphony of the Night is forever

Why the classic game still commands so much love (and money)

The strangest thing about Castlevania: Symphony of the Night is how it’s over a decade and a half old and I’m not sick of it. I don’t just mean it’s old but I still like it: I mean I still play it regularly. I don’t think I ever really stopped. I can hardly remember when I didn’t play it. I have no idea how many times I’ve finished it.

I have had some incarnation of it on every platform I have owned whenever compatible, even when it involved irksome fiddling (I’ve never bothered streaming to my PlayStation Vita for any other reason) or special labor (I bought Dracula X Chronicles and persisted through Rondo of Blood only enough to unlock a PSP port of Symphony of the Night). I even bought the Xbox Live Arcade port, and nobody ought to have bought that.

I have played it with every significant relationship partner, and with numerous insignificant ones (ask any good-looking person in a Brooklyn bar at 1:30 AM you wanna go play Castlevania and see if you ever hear no. Trust me). When I first met my current, most significant partner, he determinedly played through Symphony of the Night, insisting on all the subweapons I never used and all the tactics I never took, because he wanted to distinguish himself. We are well into our third year together now.

This is all very strange, because everyone else my age insists that Super Metroid is the better example of the Metroidvania genre—you know, the genre where you go around and see stuff you cannot reach or achieve, and then later you get a special ability someplace else and go oh yeah, and you go all the way back to that thing you couldn’t do before and you do it.

There is nothing like finally unlocking the solid door that proves to you that this area leads to that area after all. Or let’s say you’ve passed by a very high ledge countless times, maybe even over years when you were a kid. And then one day you finally kill a boss—you weren’t thinking about the ledge, just about defeating the enemy—and your prize is that you can now jump twice as high.

So you go what if, and you go back to that immortal ledge, thinking just maybe. And you jump, you double-jump, and for the first time in your life you just slip like butter up onto the ledge, and an entirely new place unscrolls before your eyes, a palace of unopened presents and brand new and unmapped rooms.

That’s what they mean when they say Metroidvania. They don’t say Castlevoid or Castleroid for a reason. But I always thought Super Metroid felt sterile, too orderly. It’s going for the Alien-inspired lonesomeness of space, of course, but I never bought into it, with all that rolling around like a little Nintendo rubber ball, pooping those tiny mines everywhere, waving my gun arm around. Collecting items. Too clean.

By contrast, Symphony of the Night is a sprawling, atmospheric harpsichord concerto, a catacomb of inexplicable spaces, impeccable visual style and uncountable secrets. You play as Alucard, a half-vampire with beautifully-animated hair and a cape. Alucard wakes up from a long, self-imposed sleep because his father Dracula has re-emerged, and this time the anticipated vampire hunter hasn't shown up for the regular centennial Dracula beat-down. So it's up to you.

According to the Castlevania universe, when Dracula is summoned, so too is his castle. You smash Dracula’s candelabras and enter his guest houses and destroy all his demon friends. You eat his old food. You are a son wandering through your father’s deserted chapels, with their high-glass rainbows and arrow-wielding nightmare seraphs. From his parapet you can use his spyglass to watch his boatman. You solicit help from Dracula's librarian, who reluctantly agrees, because it's your house, too.

And eventually you learn all his old spells. In forgotten holes you find a tiny emblem called Power of Sire. In a sense, the castle is your father; you’re in your own family home, at war with some part of your nature that’s ill and decadent, a part that you feel morally responsible for defeating. You are, we presume, the only one who can.

The bestiary is terse and massive, and so is the list of arms and accessories. Some of them are so rare you might never find them, and then they have secret moves if you know what to press. There are secrets on top of secrets.

In fact, every time I play Symphony of the Night, I find something I’ve never seen before. Everytime I let a friend play it there’s always at least one moment where a never-before-seen drop occurs and I bolt forward, going wait, what’s that, and the friend gets to be a little delighted at his accidental success.

There are more than 40 items of food and most of them replenish inconsequential amounts of health. The food is just part of the story, in its way. You are in a rotting baroque castle, and you break open a staircase and a turkey falls out. You find a hidden room at the end of a long corridor where a gravekeeper is alone with a lovely green tea set. Eating it is not the point.

If you manage to find some peanuts, you can toss them up and catch them. You don’t need to. But you can, if you get the timing just right.

The voice acting is all oddly bad, sepulchral and morose, like it comes from disembodied heads. The great living castle is full of chairs. You can sit in them, Alucard, the elegant, disdainful prodigal son. It does nothing, but it matters that you can—looking classic and tortured among Dad’s gross decor. You are an elegant, petulant young dhampir and you can do whatever you want.

There are beautiful, topless young women that suddenly erupt from the hearts of roses. If you pause to stare, they run you through with thorns. Many of the demons of Dracula’s castle are beautiful, like the sexy succubus who pretends to be Alucard’s human mother, to trick him.

At one part there’s a confessional booth, with a chair that faces the curtain, and if you go and sit down a ghostly figure appears and enters opposite you. Then usually a fusillade of sharp weapons erupts unexpectedly from the confessional and you die.

If you get a GAME OVER screen, the caption says Let us go out this night for pleasure. The night is still young, scripted elegantly beneath a cow skull. What kind of pleasure? Does Alucard, like, give into his dark side if he loses his life in his father’s world? Ooh.

You can “one hundred percent” complete Super Metroid. You get all the items and you see everything and that’s it. Symphony of the Night’s max completion percentage is 200.6%, for goodness’ sake.

I guess the fact I’m not sick of it is not that strange after all.

Director Koji Igarashi says he wants to make us another one like that, and in just a couple days he’s raised over a million dollars on Kickstarter. Apparently he has wanted to make another one like that for a long time and all the thousand little bureaucratic indignities of traditional risk-averse corporate game development in Japan had been getting in the way.

It’s very rare for a Japanese game developer like Igarashi to go indie. I’m so excited for him. Everyone deserves to be in charge of their legacy; in a way, I think that’s what Symphony of the Night has always been about.

My friends are kind of worried about how it’s going to come out and what if it’s not good and all of that fan stuff. There is a lot of justified reservation about traditional game developers raising huge Kickstarter hauls. But it doesn’t matter to me, really. Either way I’ll keep playing Symphony of the Night. Probably always will.

There is nothing quite like that feeling: you, a blinking light on an uncharted section of your map, making the dark spaces light, unyielding til you touch every corner, find every hidden room, every breakable stone.There’s nothing else like it; knowing, then, that your world, your life, is not made up of discrete “stages”, but rather is infinite and interconnected, even if you don’t understand all the connections yet.

You can go back, and you can kill the demons, and dig up the secrets, and then you can get out.