How to know if the Overland Expo is for you 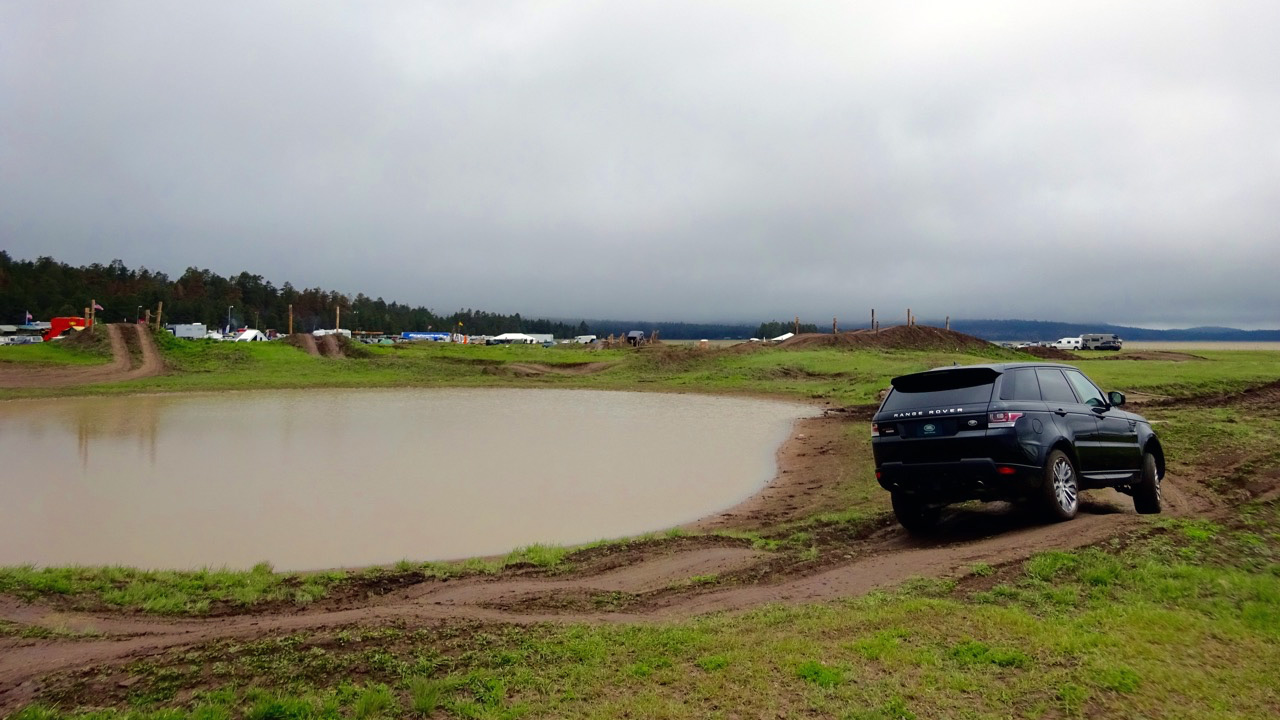 How to know if the Overland Expo is for you

An afternoon at the United States' premier—and mostly only—convention for people who really like to live in their trucks.

Not sure if you'd enjoy the Overland Expo? This video should serve as a simple litmus test: if you don't enjoy watching a $125,000 Sportsmobile (née Ford Econoline) being towed out of a self-inflicted mud bog by a $250,000+ MAN-based camper, then the outdoor show and clinic series probably isn't for you.

Last weekend's event was mired in a mud flat outside of Flagstaff, Arizona, a hard-packed clay that was coated in a two-inch layer of friction-breaking snot. All the better to test out driving a new Range Rover Sport on the off-road course with a provided navigator in the passenger seat, to guide me through each obstacle and to chirp disapprovingly when nearly putting the supercharged SUV into a pond. (Street tires were not the best choice when trying to stop sliding down a six-foot mud hill, but there's nothing more fun than learning the vagaries of a new machine that you don't have to pay to repair.)

Classes include off-roading basics like mechanical repair and winching, as well as more quotidian advice for long-term adventures like budgeting and relationship maintenance. Not every attendee will be driving to Tierra Del Fuego or spend their winters on safari in Africa, but some do, and there's no better place I've been to get a taste for all the methods available that involve gasoline and a vehicle of your own: BMW and KTM adventure bikes are parked in between road warrior ultra-RVs and beautifully restored 4x4 classics; there's a flavor for everyone but the backpackers. (Bless them.)

Every shade of compromise on the comfort-to-capability gradient is on display: motorcyclists with tents; small trucks with self-contained fiberglass rooftop tents; slide-in campers for pick-ups that can withstand some light wheeling; quarter-million-dollar all-but-custom rigs from the likes of Earthroamer and GlobalXVehicles, the latter of which has sold something like 60 large-scale vehicles in the last few years, according to its owner Michael Van Pelt. It's a first-world market for third-world tourism, to be sure, but Van Pelt told me not every client is rich—just wealthy enough to be able to invest in a bit of highly mobile real-estate welded to the chassis of used military trucks. (The resale value is, at least according to Van Pelt, pretty decent; they don't appreciate, necessarily, but they don't lose value as quickly as your garden-variety truck.)

As in every endeavor, when it comes to overlanding there are options for the rich and for those willing to make themselves rich by targeted deletion of their need for security. The Overland Expo is a great place to get a taste for the lifestyle, should it tickle you, without jumping headlong into a commitment. I learned a lot in my short stay (although not much from the vendors, all of whom were perfectly nice, but simply showing gear you can read about online; most offered on-site discounts, however). And as the drizzle turned into sleet that gave no sign of letting up, I was just as happy to be able to hop in my little truck and drive towards sunny weather and a warm, dry bed.