These Women Have Crossed the Line: 30 activists cross North Korea DMZ for peace 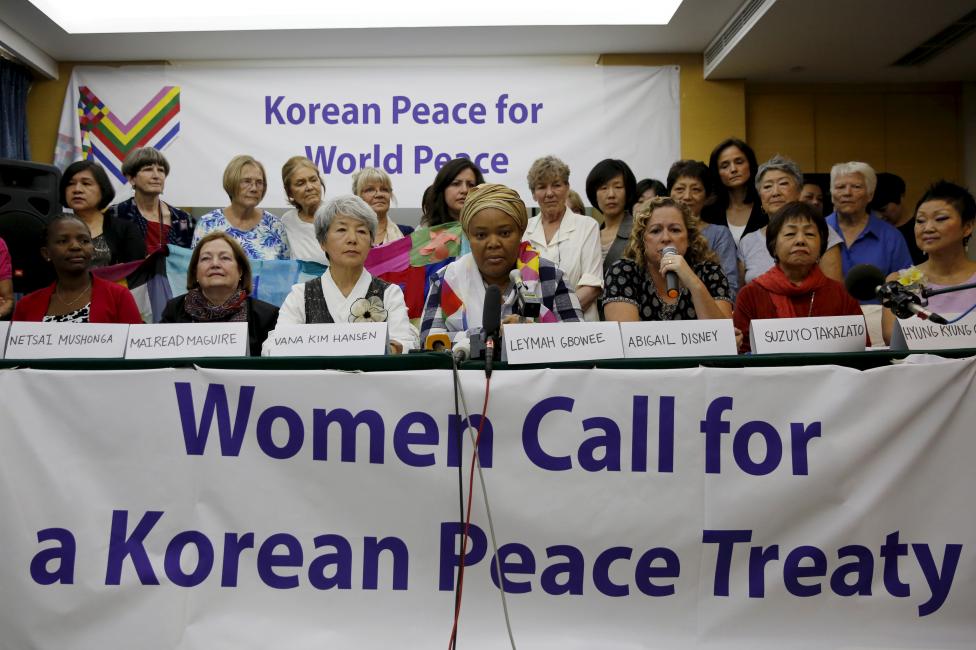 Members of the WomenCrossDMZ group attend a news conference before they leave for North Korea’s capital Pyongyang, at a hotel in Beijing, China, May 19, 2015. REUTERS/Kim Kyung-Hoon

These Women Have Crossed the Line: 30 activists cross North Korea DMZ for peace

In an historic move, a group of global feminist activists march into the demilitarized zone between North and South Korea to create a space for a new type of conversation about truly ending the Korean war.

At the time of this blog post in Seoul and Pyongyang it’s already Sunday, May 24th, International Women’s Day for Peace and Disarmament, when a group of more than 30 women are scheduled to cross the Demilitarized Zone (DMZ) at Kaesong from North Korea into South Korea. Their goal: to draw attention to Korea’s “forgotten” and unfinished war, and move toward a real peace that can reunite families and, perhaps, a divided nation.

The march includes both North and South Korean women marching on their respective sides, and was preceded by a peace symposium in Pyongyang (watch North Korean TV coverage here). It will be followed by a similar symposium in Seoul after they cross the DMZ (Saturday evening in the U.S.).

The Korean War (officially 1950-53) stands out for its bloody toll. Some 4 million people, mostly civilians, perished. Although a “temporary” cease-fire was signed, the last 62 years have been marked by a protracted cold war defined by ongoing threats by both sides of the DMZ, decades of profligate military spending, and what is effectively a permanent state of near-war and the fear of attack.

The idea to walk from North Korea into South Korea began with a dream that lead organizer Christine Ahn had several years ago. The concept grew after Ahn connected with feminist icon Gloria Steinem who took a public stand in 2011 against the militarization of South Korea’s Jeju island.

Activist and feminist Gloria Steinem (C) speaks at a news conference before the WomenCrossDMZ group leaves for North Korea's capital Pyongyang, at a hotel in Beijing, China, May 19, 2015. REUTERS/Kim Kyung-Hoon

The movement evolved into WomenCrossDMZ as Nobel Peace Prize laureates Mairead Maguire of Northern Ireland and Leymah Gbowee of Liberia joined Ahn, Steinem and what has grown to more than 30 women from South Korea, Japan, the US, Britain, Australia--at least 15 countries, in all.

Gwyn Kirk, a founding member of Women for Genuine Security, and one of the DMZ marchers, says WomenCrossDMZ is intended to create a space for a new type of conversation about ending the Korean war once and for all. After more than 60 years of tit-for-tat provocations, costly and dangerous brinksmanship and outright nuclear threats, Kirk says it’s time to create a different future.

That this movement is organized entirely by women is natural, says Kirk, pointing to UN Security Resolution 1325 which reaffirms “the important role of women in the prevention and resolution of conflicts, peace negotiations, peace-building, peacekeeping, humanitarian response and in post-conflict reconstruction…”

As these women mount a brave effort to do what men have failed to achieve (bring peace to the Korean peninsula), they are also receiving criticism for their efforts. One Korea policy commentator went so far as to call the group “naïve, duplicitous, disingenuous, fatuous, and [stupid].”

CNN’s Brian Todd asked if Kim Jong-un was “in league with a women’s group to bring peace between North and South Korea” and played up suggestions Christine Ahn might be “sympathetic” to North Korea. The Monthly Review responded by breaking down why The Situation Room with Wolf Blitzer did a “hatchet job” on WomenCross DMZ rather than a serious examination of what they set out to achieve.

NGO activist Choi Ai-young (R) and other members of the WomenCrossDMZ group pose with Korea's traditional patchwork before the group leaves for North Korea's capital Pyongyang, at a hotel in Beijing, China, May 19, 2015. REUTERS/Kim Kyung-Hoon

Independent investigative journalist Tim Shorrock had a different take. In an email from Seoul, he called the DMZ march “an important milestone because it runs against the grain of the militarist approach to Korea taken by the Obama administration and the hostility of the South Korean government.”

Shorrock, who has covered Korea and Japan for more than three decades, said the women’s march and symposia held in Pyongyang and later Seoul, sends a message to the North that peace and reconciliation are possible. He hopes the march will also spur the U.S. to “take measures to defuse the tense situation in Korea and adopt a more flexible approach to settling its differences with North Korea.”

Responding to charges that she and her colleagues are “sympathetic” to North Korea, Christine Ahn says it’s ironic that people who claim to be staunch supporters of human rights are the ones most vehemently opposed to efforts to pursue a real peace agreement.

“You’re not going to see any improvement in North Korean human rights if you continue to isolate them or not engage or have dialogue,” Ahn said by Skype. The universal theme that has united years of international NGO reports, she says, is that there needs to be a peace settlement to improve human rights in North Korea.

WomenCrossDMZ, Ahn says, seeks to “get to the root cause of the issue of divided families” and what she calls “crazy militarization” and “crazy repression” of democracy in both North and South Korea.

Ahn says former U.S. Ambassador to South Korea James Laney cut to the core of the Korean issue when he said, “...One item should be at the top of the agenda...that is the establishment of a peace treaty to replace the truce that has been in place since 1953...”

To fully appreciate why North Korea has evolved into a “paranoid, hyper-militaristic society,” Ahn says it’s important to carefully examine history before the 1950-53 Korean war and remember the tremendous losses suffered by the North. “We might have forgotten that history,” she says, “but [North Korea] hasn’t.”

Ahn describes WomenCrossDMZ as “peace women” who want to find a peaceful resolution to the Korean stalemate. To do that, she says, requires listening, understanding, dialogue and a degree of empathy which is absent today. Dehumanizing the other side won’t bring peace, Ahn says. “It’s a tough place to be, but I really believe there is no other alternative.”

Being armed to the teeth (hasn’t worked)

Gwyn Kirk says that reducing military tensions is more likely to lead to better human rights conditions. “That’s what we’re advocating...more dialogue and more openness.” As long as there’s no dialogue or engagement, nothing will change.”

Kirk points to diplomatic progress between the United States and both Cuba and Iran, saying that “sanctions, being armed to the teeth [and] militarism hasn’t worked.”
She adds, “So if that’s controversial, I guess [it’s] controversial but it just seems to me that this old cold war stuff is really history...We need to move forward and think differently.

Photo, top: Members of the WomenCrossDMZ group attend a news conference before they leave for North Korea's capital Pyongyang, at a hotel in Beijing, China, May 19, 2015.
REUTERS/KIM KYUNG-HOON