A director on Game of Thrones' epic White Walker battle 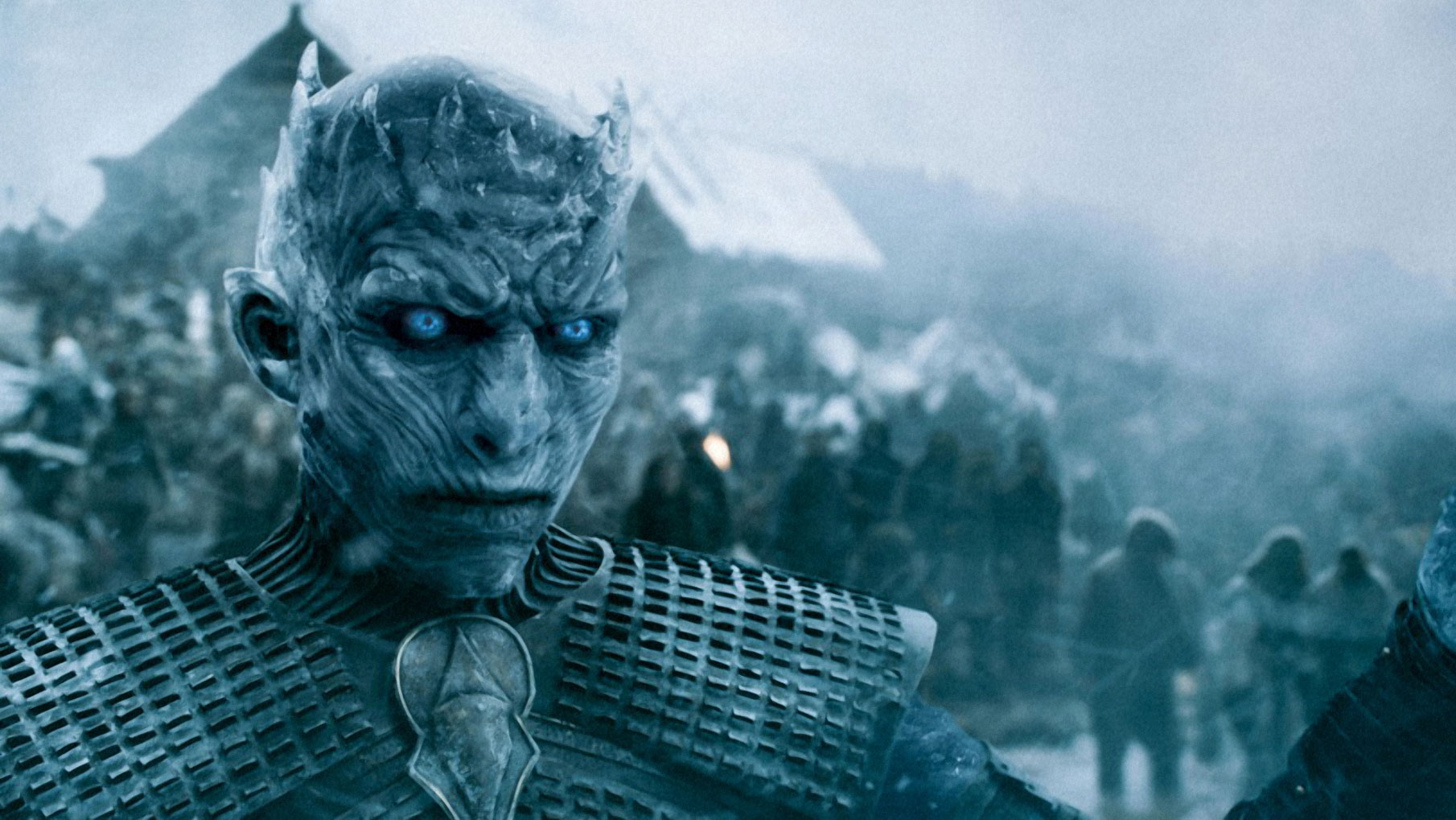 A director on Game of Thrones' epic White Walker battle

The latest episode recapped with a special eye on its screencraft.

Tyrion and Dany talk statecraft. Cersei is stuck in jail. Arya is selling oysters, staking out a hit. Guess this is going to be a pretty bori—OH. MY. GOD. An army of White Walkers battling the Wildlings and they can run like hell!

A few weeks ago, I commented on the use of computer graphics in GoT and how wise and parsimonious the showrunners had been, and presumably would continue to be.

“They haven’t overreached yet,” I opined.

Well, I maintain that they still haven’t, but how wrong I was in estimating their ambitions! As a film-maker type and occasional recreational user of CG, I can assure you that the "army of the dead" throwdown in this episode was a big deal. Lots of stuntiness. Lots of effects. Lots of planning. Lots of storyboarding. Lots of time and effort. To think that I was complaining about how long the White Walkers took to get anyplace! All is forgiven, White Walkers.

This even explains why there have been so few effects in the previous couple of episodes. Some matte paintings, yes; but most of the sense of scale has been conveyed with audio, practical locations, tents, and liberal dousing of Falling SnowTM. When Ghost made a cameo appearance and saved Sam’s ass last episode, I couldn’t help but notice that he only showed up for one shot, and then was sort of finessed out of the other angles. That’s the kind of thing that happens when your visual effects supervisor says that there isn’t the budget, money- or time-wise, for more shots. Turns out most of the pipeline was being saved for the zombies. Excuse me, Army of the Dead.

Pixomondo, if the Game of Thrones wikia serves me right, is responsible for the lion’s share of GoT CGI (I hope I have this right).

There’s a great meshing of practical and CG effects here, a great corporeality and crunch and bite and slosh to the creatures and the atmospheres. Much praise is also due to the makeup department as well, not to mention props, stunts, and, let us not forget, production design. The White Walkers look great. Scary and uncanny (in a good way) and somehow smug. The ending face-off-at-a-distance between Jon Snow and Creepy Baldy Walker is totally earned -- not easy when you’re basically matching up a live actor shot-for-shot against a CG character and asking the audience to take their expressions as comparable in depth, and related to one another.

WonWon was another triumph. Earlier in the show they soft-pedaled with the giants, and occasionally ran around the backhand, as it were. Here, you had full-on interaction with the environment, realistic physics in the fights with the zombies, locked-off shots, moving shots, shots incorporating crowds, extras, the whole nine. Most importantly, you cared about the guy.

I thought, “Oh no! They’re going to drag him down with their numbers!” and then I realized, “Of course they won’t, because he’s fucking awesome!” When you’re doing these kinds of shots, there is always a logistical pressure to rule the more complicated characters out of as many shots as possible, to save effort and cash for what you know you need. Eventually you start to feel the absence of certain characters or elements, like they have a gravitational pull to them, and your eye wants to be following them somewhere offscreen. This sequence never suffered from such economies. You got the dead. You got fighting. You got ships. You got loads of extras (real and CG). You got a giant cold stepping on fools. You got White Walkers chilling in the distance. You even got Jon Snow fighting a White Walker. Bravo. Double bravo. Braavos.

Story-wise: okay so maybe I shouldn’t call the Army of the Dead zombies, but they’re zombies. But I guess that their bites don’t infect people? Also they don’t swim. Also their bosses don’t swim. Fair enough. Also Valyrian steel works as well as dragon glass? I was kind of expecting it, since they tipped that Valyrian steel would matter in the “Previously On” bit.

I really liked Bjork-y Wildling Badass lady, and I think it was a major drag that she got eaten by the zombie kids. Would have been fun to see her more. Was she unable to defend herself because of her maternal instinct? But then why didn’t she bash the zombie kids so that she could get back to her own, living, kids? It takes a village, I suppose.

And I know some other stuff happened in the episode. Anybody want to see a showdown between Brienne and Mean Nun? I do. I like the way that Jonathan Pryce is playing the Big Sparrow -- there’s no moustache-twirling, no arch changing of demeanor -- he is consistently calm and reasoned and blithe and ruthless.

In her chatty-chat scene with Tyrion, there’s an interesting editing choice when Danaerys says, “I’m not going to stop the wheel, I’m going to break it.”

This was the big pull-quote they used for the season preview, and stitched together the way they did then, it sounds impressive and all, but it changes when it’s being said to Tyrion. Which is to say, Tyrion has just gotten through telling Danaerys that she needs to be realistic, and win over the nobles an the big Houses as well as the common folk, when Dany goes into her whole Spokes on a Wheel thing. If you’re a Tyrion fan, and who isn’t, don’t you expect him to reply, “Yeah, that’s a nice metaphor and all, but didn’t you listen to everything I just told you? All you’re going to have is a broken wheel.”

For obvious reasons, which is to say in order not to deflate the attitude that Dany is putting forth, he doesn’t do so; but if one is going for the effect of “Wow, she just said something awesome,” it would seem to call for a reaction shot. However, Dinklage being as in character as he is, there’s kind of no way to cut to Tyrion without undercutting the moment.

I mean, you might have been able to eke a “You Crazy” look out of it, but my suspicion is that Dinklage stuck to his guns and didn’t give up the “I Will Follow You Anywhere” look that was called for. Perhaps I am overthinking it. But, the final effect is a bit odd -- the shot on Dany doesn’t breathe and then we’re out, a suitable rhetorical ending to the scene but you can’t help but hunger for Tyrion’s take on the idea.

Ah, Dinklage. His accent is still all over the shop after five years, but it really doesn’t matter ‘cause he’s so damn good. I felt badly for Jorah, but it all made sense, Tyrion advising Dany to give him the boot a second time. Surely it was a thankless day for the actress who plays Missandei, though? I mean, couldn’t they just have given her the day off, since she doesn’t even speak in the scene? Or give her something to say? Or a look? She might have been a good audience proxy watching the tennis match between Dany and Tyrion.

You’ve got to ask yourself what Jorah has in mind, what with suffering from the Greyscale and all. He’s like the worst stalker ever.

Maisie Williams is on good form here; she’s been gloomy enough that her sudden smile as the oyster-girl has some real weight, and makes us believe she’ll be a reasonably good servant of the Many-Faced God. I can’t for the life of me decide whether the guy who plays Jaqen H’ghar is brilliant or terrible, but I do like watching him.

Sansa learns from Theon/Reek that he didn’t kill Bran and Rickon. That’s nice. The scene is full-on Northern Blue Tone, and they do a nice thing cinematographically, which is to go relatively realistic with the lighting so that the windows are overexposed and the people, who are inevitably in the foreground, are appropriately dark relative to the light source. Makes you concentrate more on them as you have to pick out the details of their expression, rather than their being lost in an even wash of brightness.

Ramsay Bolton has some dumb idea about attacking Stannis’s army with 20 “good men.”

Olly is still pissed about his family getting massacred. Get over it! I kid. But why do we have this scene? So that Sam can explain why Jon Snow is doing the Hail Mary thing at Hardhome, presumably.

Then come 30 minutes -- 30 minutes! Of conflict and action at Hardhome, its own self-contained sequence. That’s a lot of damn work. And, to me, it’s an improvement over GRRM(May he Write in Peace)’s books, in which you never have a really strong sense of the urgency behind John Snow’s rescue of the Wildlings. This gives us first-hand experience of the enemy, and puts pressure on all of the contenders in a way that has, up ‘til now, only been talked about.

Underneath it all, you feel the marshaling of strength, production-wise, for what’s to come. One of the big challenges about bringing GoT to the screen has always been whether the effects and budget could keep up with the scale of the books. It’s helped that much of the strength of GoT is in the long tease; yet, in the end, Winter has to come.

So, let us now praise unsung producers. David Benioff and D.B. Weiss are both extremely clever and talented, which has been noted elsewhere. Here the ace in the hole may be Chris Newman, who was our 1st A.D. when my brother and I shot About a Boy. Before that he had scheduled and planned a little movie called The Phantom Menace, which had a few effects shots and action sequences. The kind of big-screen-scale grooviness which the Hardhome sequence represents to me take some major budgeting and scheduling and producing chops, and I’d be surprised if Chris and his people weren’t deep in it.