Meet Cinnamon, the cute character who is viciously bullied every day in Japan 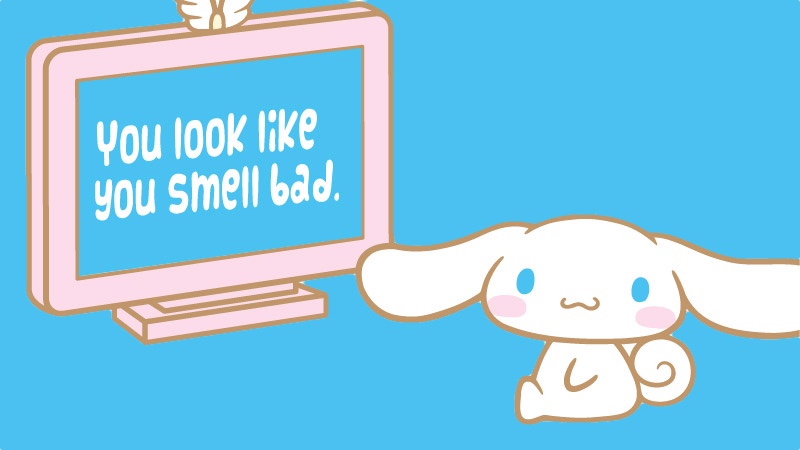 Meet Cinnamon, the cute character who is viciously bullied every day in Japan

“You look like a piece of soap, get diarrhea.”

All the white puppy wanted to do was share his French toast. Cinnamon, a cute character created by the same Japanese company responsible for Hello Kitty, posted tweets like this every day. Normally, these morning messages would be met by followers gushing about how cute the attached picture was, or fans wishing him a “good morning.”

Cinnamon’s online life in recent times, however, had become tense. “You look like a piece of soap, get diarrhea,” one user wrote in response. Another Tweet -- since deleted, but preserved by other users -- said “Please kill yourself with that knife.” For the last few weeks, the dog character had faced abuse like this daily, every innocuously cute post met with a sea of “shut ups” and “die.”

Many imagine Japan as a land stuffed with adorable characters. Hello Kitty has become a global ambassador of all things “kawaii,” while recently John Oliver featured a segment on his show devoted to the country’s use of mascots for -- nearly everything. Yet the situation isn’t always so cuddly. Cinnamon’s recent Twitter interactions marked the first significant time a huggable character has been the victim of cyberbullying in Japan. And it hasn’t just been a few isolated comments, but a steady stream of nastiness from hundreds of Twitter users. It has inspired reactions from well-known pop singers and warranted coverage in multiple national newspapers and on TV. The Cinnamon saga struck a nerve with people in a country where bullying -- both digital and physical -- is an issue on the rise.

The critter at the center of it all, though, is neither new or obscure. Sanrio, Japan’s premier producers of cute characters (think Hello Kitty and My Melody) created Cinnamon in 2001 as the flagship character of their “Cinnamoroll” series. He’s featured in cartoons and comics, and became one of the company’s most popular entities. Walk by any branch of Tokyo Tomin Bank, and chances are you’ll see a stuffed Cinnamon in the window. In this year’s annual Sanrio character ranking, early polls (these are very serious affairs) projected Cinnamon to finish third overall, ahead of Hello Kitty.

Yet glancing at the replies to Cinnamon’s daily tweets reveals a lot of people wishing ill on the character and his various friends. There’s no definitive starting point for the bullying -- various mean-spirited comments have long slipped into Cinnamon’s stream, but were the sort of isolated trolling every high-level Twitter account expects -- but sites such as Naver Matome report it really got going over the last three months, escalating drastically near the end of April. A drawing of Cinnamon standing in front of some colorful flowers, for instance, prompted digital shouts of “shut the hell up, I just ate lunch!” and “you look like you smell bad.” A tweet featuring the character holding a pile of the dessert he’s named after had commenters wondering why he was holding a plate of pink poop (a theme riffed on in similar Tweets). The insults keep going, and even an act as simple as showing off a new umbrella resulted in someone telling him to “suck my dick.”

Nearly every Sanrio creation has a Twitter account, where new drawings get uploaded daily, but only Cinnamon has attracted cyberbullying. Users even noticed this discrepancy -- while relatively new characters such as Gudetama (a lazy anthropomorphic egg) and Kirimi-chan (a hunk of fish meat) received warm messages, a Cinnamon tweet from the same day drew comparisons to the movie The Human Centipede. Users have tried to spam other Sanrio character’s feeds in the past with mean-spirited messages, but nothing came out of it. Yet by early May, every new tweet by Cinnamon was met by a mix of people trying to be clever with their insults, generally nonsensical threats and those relying on sub-playground approaches (“die,” “shut up,” “you’re ugly,” “go away”).

Why Cinnamon? Many Japanese Twitter users have been speculating about it (Naver Matome gathered many of their thoughts online), and the consensus seems to be that it’s all for the likes. Early jokes at the expense of Cinnamon -- such as an image of Cinnamon being targeted by a fighter jet -- raked in favorites and retweets. Tweets poking fun at the dog-like creature, along with parody accounts posing as official, did well, inspiring more users to try to replicate that success. These early examples, though, were far more good-spirited than what came after. The tweets, in an effort to stand out, got meaner and meaner, eventually dissolving into what would constitute bullying against a human.

Whatever the reason, the abuse hurled Cinnamon’s way got worse as May dragged on. Fans of the character first offered words of encouragement to Cinnamon (“don’t take all this too seriously, Cinnamon!”) and eventually started pushing back against the bullies, talking to them directly. Sanrio addressed the issue head on, by posting a cartoon where Cinnamon’s friend Chiffon addressed Twitter in place of Cinnamon. “I’m here to protect Cinnamon, and you should protect your friends too!,” is how Anime News Network translated it.

The same day, Sanrio blocked over 200 accounts that had been harassing the character. This only enraged the anti-Cinnamon crowd, and resulted in one popular user claiming to receive a message from Sanrio telling him to come out to their offices, which he documented on Twitter. He faked it -- Sanrio never contacted him -- for the likes. The abuse kept coming.

But it also resulted in the story getting more widespread media attention. Dozens of Japanese web sites wrote about it, followed by newspapers such as the Chunichi Shimbun and the Tokyo Shimbun covering it as well. Government-backed channel NHK did a report on it, and soon celebrities were coming out to support Cinnamon. TV personality Arie Mizusawa expressed her happiness at Sanrio taking action, while former members of the pop group BiS took to Twitter to back the character. An online news video summed it all up neatly.

Cinnamon might be a fictional character, but what the floppy-eared puppy endured is a very real issue in Japan today. Bullying has long been a problem in Japanese schools and workplaces, attracting plenty of attention from the media. Earlier this year, The Japan Times reported that the number of cyberbullying cases in the country was on the rise (as was all bullying). It’s an issue that has affected thousands in Japan, and which has been a topic of discussion for quite some time. There have even been songs written about it -- pop-gone-death-metal outfit Babymetal wrote a song with a title that translates to “No More Bullying.” Cinnamon isn’t a real person, but he’s famous enough (and the situation strange enough) to act as a microscope on cyberbullying. It revealed how many people are ready to pile on somebody for praise, and how many others hate seeing someone being picked on.

Cinnamon’s online life hasn’t completely returned to normal. Mean comments still appear, and larger flare ups still happen, such as when he drew a picture that some simply described as “bad,” others “garbage” and still more “like sperm.” Fans, though, have also come out in higher numbers to counteract the negativity with simple messages of “good morning Cinnamon!” and “so cute!” while also shouting down the mean users. Cinnamon might never fully be able to draw or enjoy his breakfast in peace ever again, but at least he’ll have plenty of people on his side.