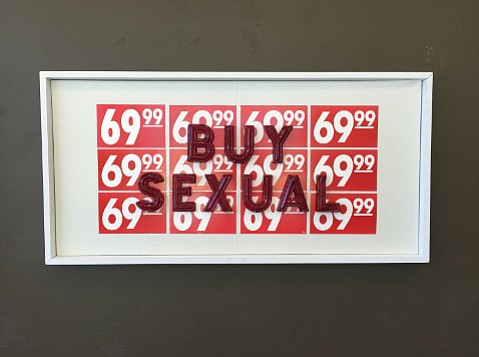 Peter from the National Coalition Against Censorship writes, "A California official removed an artwork by skateboarding icon Scott Olson from a public building because he said it was 'obscene.' Sorry, the First Amendment exists to prevent this kind of thing.

"Buy Sexual" by artist and skateboarding icon Steve Olson was installed in the foyer of the Betteravia Government Center building in Santa Maria. But Santa Barbara County supervisor Peter Adam decided the piece was inappropriate, and directed his chief of staff Bob Nelson to remove it. As Nelson told a local newspaper, "Our office finds this obscene and inconsistent with community standards."

But other government officials thankfully saw things differently. After a meeting of the County Art in Public Places (CAPP) committee, Olson's artwork was back on the wall– albeit in a different location in the same building.

On September 16, NCAC's Arts Advocacy Program sent a letter to the members of the Santa Barbara County Arts Commission commending them on their decision to rehang the piece. The letter pointed out that the claim that Olson's artwork was obscene "does not fit any legal definition of obscenity, and thus the removal of 'Buy Sexual' is very likely a violation of the First Amendment."