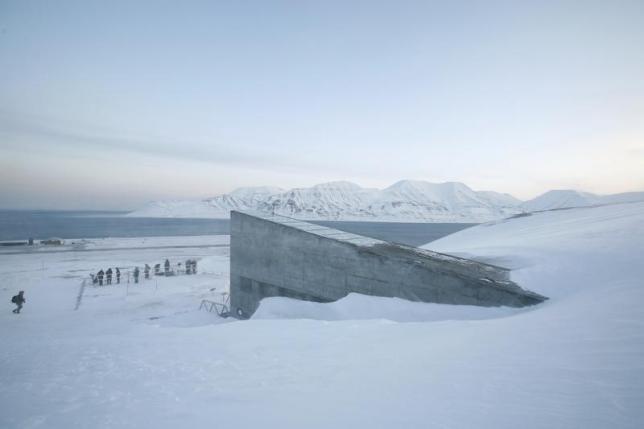 The ongoing war in Syria has led researchers to make the first withdrawal of seeds from a "doomsday" vault in an Arctic mountainside, to protect global food supplies.

The Crop Trust reports that the newly-removed seeds, which include samples of wheat, barley and grasses suited to dry regions, were requested by researchers elsewhere in the Middle East to replace seeds in a gene bank near the Syrian city of Aleppo which was damaged by the conflict.

“This diversity provides our scientists, breeders and farmers the raw material needed to improve agriculture to overcome the challenges of climatic changes, population growth, pests, and diseases,” the researchers say.

PRI did an amazing profile of the Aleppo seed bank earlier this year. You can listen or read here.

“We’re very lucky that [the rebels] realize the importance of conserving biodiversity; it’s one of the activities that has never been interrupted in Aleppo,” Ahmed Amri of the Syrian seed bank told the radio news network a few months ago.

“But we cannot predict how each day will be.”

"Protecting the world's biodiversity in this manner is precisely the purpose of the Svalbard Global Seed Vault," said Brian Lainoff, a spokesman for the Crop Trust, which runs the underground storage on a Norwegian island 1,300 km (800 miles) from the North Pole.

The vault, which opened on the Svalbard archipelago in 2008, is designed to protect crop seeds - such as beans, rice and wheat - against the worst cataclysms of nuclear war or disease.

It has more than 860,000 samples, from almost all nations. Even if the power were to fail, the vault would stay frozen and sealed for at least 200 years.

Their seed bank in Aleppo miraculously managed to keep functioning, partly, until now. The Syrian location included a cold storage, despite the ongoing war. But the Aleppo bank was unable able to perform its duty as a hub where seeds could be grown and distributed to other nations, primarily in the Middle East.

The vault was established in 2008, and is built to survive rising sea levels, power outages and other calamities that could affect the seeds. Its main storage area is kept well below freezing to preserve the contents, and it can hold 4.5 million varieties.

“There are seeds in the vault that have originated from nearly if not every single country,” Lainoff says. “It really is kind of the only example of true international cooperation. There’s seeds sitting on the same shelf from North Korea and South Korea, and they get along just fine up there.”

Around 500 seeds of each variety are contained within the vault, according to Lainoff, and the different varieties are key to genetic resistance against potential disease that could affect the world’s major crops.

What has caused the first withdrawal from the global vault is man-made, however, as fighting between the Syrian government and rebel groups, as well attacks from Islamic State militants, have devastated the country. The conflict has killed hundreds of thousands and forced more than 4 million people to become refugees.

ICARDA managed to move its headquarters from Syria in the early days of the war, while some of its workers remained at the gene bank in Aleppo in an attempt to save the collection. The organization managed to duplicate 80 percent of its collection in Svalbard as of March this year, where the seeds were safely stored along with others from around the world.

In food security, as with computer security, redundancy is key. How amazing does the Svalbard seed vault look? I want to go there.