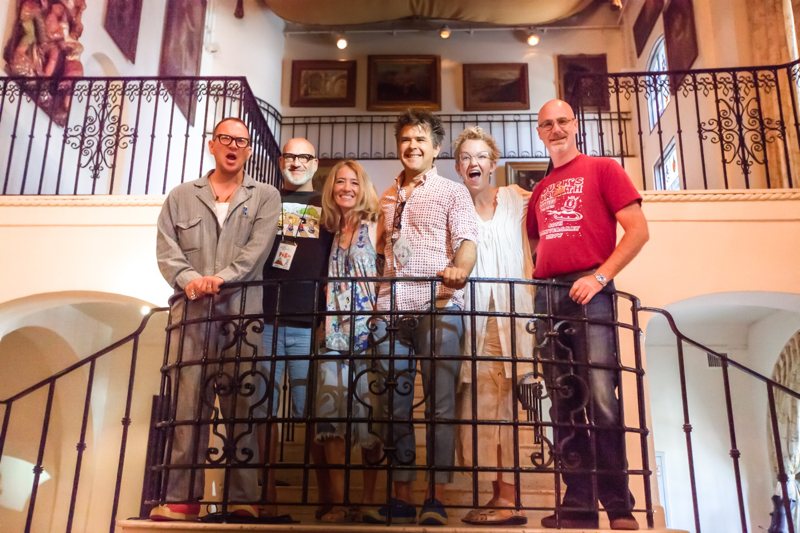 Carla, Cory, David, Jason, Xeni, and I are still giddy from our Weekend of Wonder extravaganza in association with Baby Tattoo, held at the Mission Inn resort in Riverside, California on September 18-20. In three fun filled days we and about 75 other folks learned how to make juggling balls (and juggle them), drank weird coffee concoctions, dined at a printing company and an outsider art garden, learned how to pick locks, escaped from straitjackets, created trick card decks, toured the catacombs beneath the 19th-century hotel to view macabre automata, enjoyed a musical performance by stars of Adventure Time, played a cooperative alternative reality puzzle game, and mingled until the wee hours of the morning while enjoying cupcakes and ice cream. Phew! We can't wait to do it again. The best part of the event was meeting and hanging out with Boing Boing readers and their families.

LA Weekly's Star Foreman was there for the entire event, and the paper has posted a gallery with 80 photos of the event. Enjoy the sampling below:

Boing Boing’s Weekend of Wonder in association with Baby Tattoo was tremendously fun. One of the many highlights of the 3-day event was a tricked-out coffee station that we set up on Saturday morning. I brought my Rancilio Silvia espresso machine with a retro-fitted PID temperature control system and pulled about 75 shots in on […]

Our friends at TRNDlabs, who generously co-sponsored our fabulous Weekend of Wonder extravaganza last weekend, have a new throw-to-fly Nano Drone that comes in black. Check it out here.