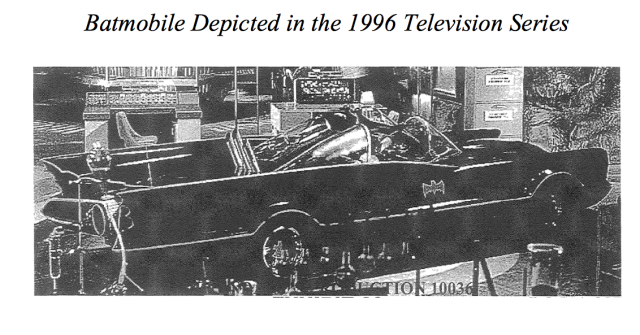 Judge Sandra Ikuta wrote the opinion for the 9th Circuit panel that heard DC Comics vs Mark Towle, in which the comics company was suing a guy who sold expensive kits to make your car look like the Batmobile.

The judge is clearly a giant Batman/comics nerd, and her opinion is full of delightful Batman references. Less delightful is the substance of that opinion. Characters are not normally copyrightable (characters are more commonly associated with trademarks -- trademark law having different flexibilities and exceptions from copyright).

To be copyrightable, a character has to have "physical as well as conceptual qualities" and "contain some unique elements of expression" while being "sufficiently delineated" so that you can tell at a glance that any depiction of that character is that character.

To make the Batmobile -- which has had numerous looks, capabilities, and versions over the years -- fit this description, Ikuta goes through all kinds of mental gymnastics, stating that even if all the details of the car changed from version to version and year to year, they were still the same, because it had a "bat themed front end" and a "bat-like appearance" "with sleek and powerful characteristics."

The problem is that this describes lots of non-Batmobiles, too. The original Detective Comics in which the Batmobile first appeared competed with many other comics in which cars with exaggerated fenders and advanced crime-fighting capabilities featured. The Batmobile wasn't the first car to meet this description, but with this decision, it might be the last.

That's the problem with this decision: it doesn't just protect the Batmobile, it does so at the expense of all the potential crime-fighting cars that might appear in new comics. It celebrates the inventiveness of the original Batman while closing the door on future inventors who want to do to Batman exactly what Batman did to all the other comics creators in the 1930s.

In living memory, comics creator conceived of a flying hero; of a caped hero, of a team of heroes, of a science-hero who used gadgets rather than powers, of mutant heroes, of alien heroes, etc. If those creators had been able to assert the claims that DC is making today -- and that Judge Ikuta is buying -- there would be no DC today, and no comics for you and me and Judge Ikuta to nerd out over.

Unfortunately, it's unlikely that this will go to the Supreme Court, so it's likely to be the binding precedent -- another piece of the creative landscape that's permanently owned by a multinational corporation, whom artists must subjugate themselves to if they want to use it.

As the district court determined, the Batmobile has maintained distinct physical and conceptual qualities since its first appearance in the comic books in 1941. In addition to its status as “a highly-interactive vehicle, equipped with high-tech gadgets and weaponry used to aid Batman in fighting crime,” the Batmobile is almost always bat-like in appearance, with a bat-themed front end, bat wings extending from the top or back of the car, exaggerated fenders, a curved windshield, and bat emblems on the vehicle. This bat-like appearance has been a consistent theme throughout the comic books, television series, and motion picture, even though the precise nature of the bat-like characteristics have changed from time to time.

The Batmobile also has consistent character traits and attributes. No matter its specific physical appearance, the Batmobile is a “crime-fighting” car with sleek and powerful characteristics that allow Batman to maneuver quickly while he fights villains. In the comic books, the Batmobile is described as waiting “[l]ike an impatient steed straining at the reins... shiver[ing] as its super-charged motor throbs with energy” before it “tears after the fleeing hoodlums” an instant later. Elsewhere, the Batmobile “leaps away and tears up the street like a cyclone,” and at one point “twin jets of flame flash out with thunderclap force, and the miracle car of the dynamic duo literally flies through the air!” Like its comic book counterpart, the Batmobile depicted in both the 1966 television series and the 1989 motion picture possesses “jet engine[s]” and flame-shooting tubes that undoubtedly give the Batmobile far more power than an ordinary car. Furthermore, the Batmobile has an ability to maneuver that far exceeds that of an ordinary car. In the 1966 television series, the Batmobile can perform an “emergency bat turn” via reverse thrust rockets. Likewise, in the 1989 motion picture, the Batmobile can enter “Batmissile” mode, in which the Batmobile sheds “all material outside [the] central fuselage” and reconfigures its “wheels and axles to fit through narrow openings.”

Equally important, the Batmobile always contains the most up-to-date weaponry and technology. At various points in the comic book, the Batmobile contains a “hot-line phone... directly to Commissioner Gordon’s office” maintained within the dashboard compartment, a “special alarm” that foils the Joker’s attempt to steal the Batmobile, and even a complete “mobile crime lab” within the vehicle. Likewise, the Batmobile in the 1966 television series possesses a “Bing-Bong warning bell,” a mobile Bat-phone, a “Batscope, complete with [a] TV-like viewing screen on the dash,” and a “Bat-ray.” Similarly, the Batmobile in the 1989 motion picture is equipped with a “pair of forward-facing Browning machine guns,” “spherical bombs,” “chassis- mounted shinbreakers,” and “side-mounted disc launchers.”