The Snowden Treaty: protecting the world's whistleblowers in the age of privacy breaches 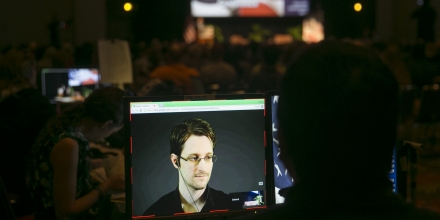 The Treaty on the Right to Privacy, Protection Against
Improper Surveillance and Protection of Whistleblowers [PDF] (AKA "The Snowden Treaty") was created by David Miranda, Glenn Greenwald's partner, who was detained by UK police under terrorism legislation while transiting through London's Heathrow airport with a encrypted thumbdrive containing some of the Snowden leaks.

The treaty, which has Snowden's endorsement, is co-sponsored by the international NGO Avaaz, and will be the first instrument of its kind: an agreement among nations to protect people who expose official wrongdoing.

The treaty arrives at an important moment: with the first tremors of the age of privacy breaches upon us, officialdom's response is to enable more spying and to immunize companies who rat out whistleblowers from liability for breaching their customers' privacy.

Without a counternarrative about security that involves protecting populations rather than putting them under suspicion, we are headed down a very dangerous and scary path.

Entitled the “The International Treaty on the Right to Privacy, Protection Against Improper Surveillance and Protection of Whistleblowers,” or, colloquially, the “Snowden Treaty,” an executive summary of the forthcoming treaty calls on signatories “to enact concrete changes to outlaw mass surveillance,” increase efforts to provide “oversight of state surveillance,” and “develop international protections for whistleblowers.”

At the event launching the treaty, Snowden spoke via a video link to say that the treaty was “the beginning of work that will continue for many years,” aimed at building popular pressure to convince governments to recognize privacy as a fundamental human right, and to provide internationally-guaranteed protections to whistleblowers who come forward to expose government corruption. Snowden also cited the threat of pervasive surveillance in the United States, stating that “the same tactics that the NSA and the CIA collaborated on in places like Yemen are migrating home to be used in the United States against common criminals and people who pose no threat to national security.”