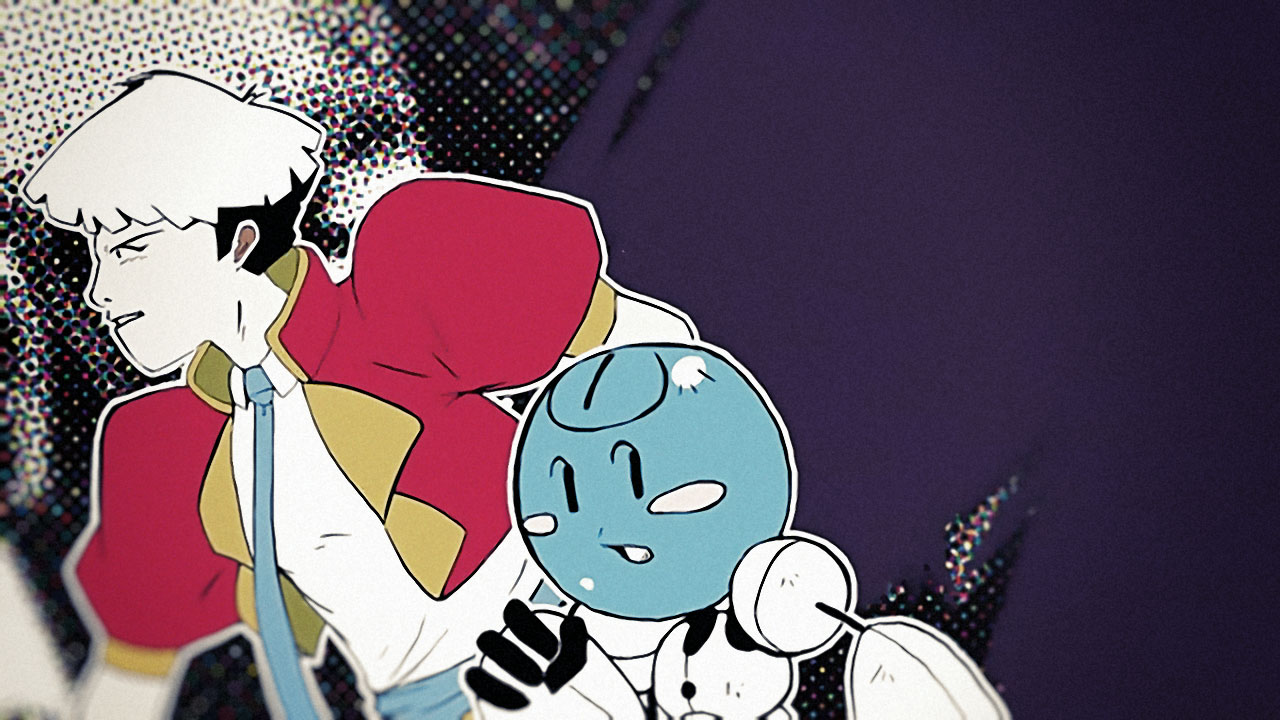 The forthcoming game Read Only Memories stars a queer guest from the future who finds hope amidst a cyberpunk dystopia.

A fateful and illicit meeting of the minds in 1945 Leningrad between the Russian poet Anna Akhmatova and Oxford philosopher Isaiah Berlin left a lasting impression on both. So much so, in fact, that Akhmatova dubbed her English colleague her “guest from the future,” a man who brought ideas from a world beyond the stultified hell of the Soviet Union.

There was a gloomy scent to the phrase, one very characteristic of Akhmatova’s unique style, and it seems well suited to a cute blue robot who brings tidings of their own through the medium of a videogame. Turing, the protagonist of Midboss’ newly released Read Only Memories 2064, is a guest from an all-too-credible future— one as layered as Akhmatova’s own thoughts about her time.

As with Akhmatova's poetry, there is a bright color to ROM2064 that conceals an essential sadness; a surface-level reading would mistake the game’s synth-bop portrayal of Neo San Francisco for an apolitical, overly optimistic RPG. But, just as with Turing themselves, there’s more than meets the eye.

ROM2064 manages several delicate balancing acts: It eschews trendy cynicism without being naive, it remains accessible to new players without sacrificing the frisson of a good challenge, and, perhaps most importantly, it breathes life into queer characters without either tokenizing them or openly moralizing about them. This is a game that does not try to convince you of queer people’s humanity: instead, it models it.

The game allows your character to pick gender neutral pronouns, and presents a variety of genders and sexualities in the its fun and diverse cast; altogether it feels like a story by us and for us as queer people, that can also speak fluently to those outside the community. That might’ve been the toughest balancing act of all.

What ROM does with its cyberpunk setting is just as interesting, and while it sometimes fails to live up to its potential there, it beautifully illustrates its themes in a way that constitutes a breath of fresh air for the genre.

You play a freelance technology journalist with a clogged sink and a broken window who wakes up to find Turing in your apartment, summoning you to adventure in their shy, if loquacious way. Their creator, Hayden, a star programmer at the Microsoft-cum-Google tech firm Parallax, has gone missing, apparently kidnapped by mysterious forces who he’d suspected of closing in on him. Your tenuous old friendship with the man and your job as a journalist has led Turing to determine that you were the most statistically likely to help find him.

Most important of all: Turing is the first truly conscious, sapient robot in a world where most of their kind still slavishly obeys their programming.

Thus begins a lengthy quest to discover what happened and, ultimately, why. This is not a brief game, for certain. If you know about classic "point and click" adventure games like Gabriel Knight or The Secret of Monkey Island, you'll be familiar with the structure here: You explore your environment, pick up and interact with objects, and speak to different characters, and ROM's Neo SF is a beautifully painted series of digital warrens, full of touchable things. The city makes a demand on your time that’s all too easy to give into; from start to finish it should take between six to ten hours, a remarkable length for a queer indie game.

Thankfully, despite the intimidating length, one never feels like the pace plods on; you flit quickly from lead to lead across the six square miles of Neo SF, each new character and location drawing you deeper into the plot. You could almost picture your character’s apartment wall filling up with clippings, clues, photographs, and more as a Pulitzer-worthy story begins to emerge about Hayden’s work and why he disappeared.

ROM’s thematic brushstrokes are brightly coloured and paint, at first, a seemingly optimistic vision of San Francisco’s future: heroic technologists, a diverse city where queer people live and party in the Castro. In the coming techno-neoliberal dystopia, our robots shall be cute, after all. It can almost, at first blush, seem wantonly ignorant of the current direction of the city. But look deeper and you realise that the brightness of the city is merely in service to the humanity of the characters. There are familiar nightmares in those pixels; android killing machines, privatised police forces, tech companies whose veneers of public service conceal terrifying aims, and rampant discrimination against people known as “hybrids”—genetically and technologically modified humans.

Hybrids are seen as a threat to the “purity” of humanity, and the so-called “Human Revolution” organises against both them and the proliferation of robots like Turing, often protesting outside gene therapy clinics where hybrids go for treatment. The optics of a future where opposition to bodily choice and fear of technology merge anti-choice and anti-trans politics into a single reactionary force, should not be lost on the player.

And yet the synth beat goes on. Midboss manages the trick of portraying a dark future without denying its various characters, from punky teenagers to dapper detectives, a chance to aspire and hope. Perhaps the cute robots shall inherit the earth after all.

Earlier I called Turing the game's protagonist, however, and there’s a reason for that far beyond the fact that they’re the mascot of the game and your companion throughout. This is their story first and foremost, and it makes for an interesting displacement of player: you may make a lot of decisions that Turing depends on you for, but Turing is the catalyst of all action in the game. Ultimately you're following the story of their growth into a position of self knowledge and responsibility. The first half of the game sees you searching both for Hayden and the truth about Turing’s history and development, of which the fairly young robot is ignorant. The second half’s arc cannot be described in detail without fear of spoiling, but suffice it to say, it is about Turing putting their newfound knowledge to use in a way that brings the title of the game to brilliant life.

I’ll give one more teaser: the final boss is not a battle, but a conversation.

Your decisions and actions do certainly affect the game’s outcome, but that manifests as nudging Turing’s blossoming personality and self-direction in one way or the other. In one pivotal scene, you refer to Turing as an object that belongs to you while speaking to another human; afterwards Turing reprimands you for this, reminding you that they are sapient and never consented to being owned by you. Nothing you say changes that; the fact that you are shoehorned into making the inappropriate comment is a reminder of whose game this really is. You merely create the conditions in which Turing can grow, but that makes for a fascinating experience unto itself and serves as yet another reminder that one can create beautiful games without always giving the player godlike powers of choice.

This is less a story about how an AI comes to its sentience than about what happens after. Our little blue guest from the future, then, has many possible stories to tell us about what they’ve learned, about family, gender, community, and how hope can still survive in an ambiguous cyberpunk dystopia.

[Editor's note: Midboss, the developer of Read Only Memories, is a backer of Katherine Cross' independent writing on Patreon. Offworld values Ms. Cross' perspective on the game nonetheless.]