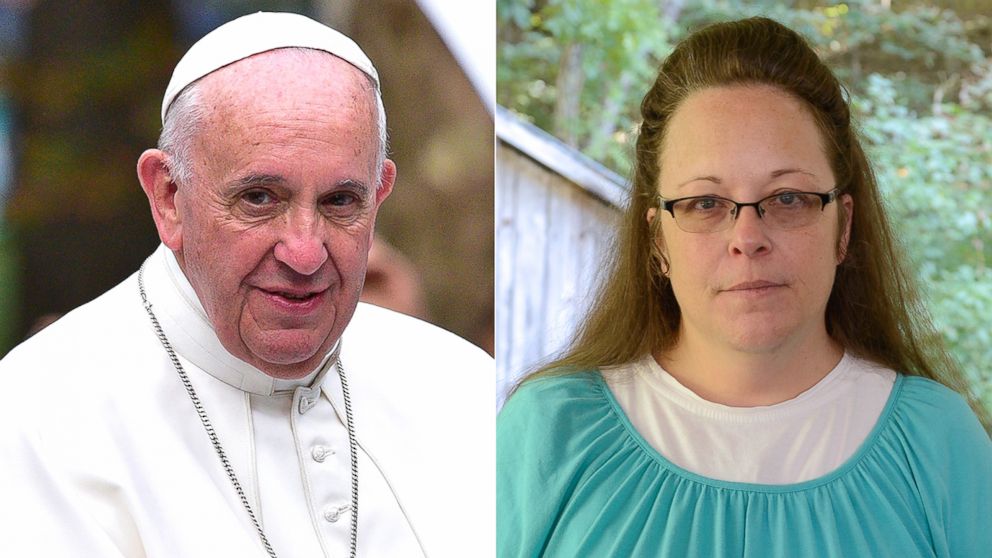 Where is your Cool Pope now, America? His PR game is undoubtedly on fleek, but he's still beholden to the same homophobic crap we know and love from the Catholic Church, the world's most powerful supporter of impunity for priestly pedophiles.

During his U.S. visit, Pope Francis privately met with Kim Davis, the Rowan County, Kentucky, Clerk of Court who was jailed for five days for refusing to obey the law and do her job: issuing marriage licenses to people, including people who are gay.

Davis has become a cause célèbre among bigots who believe two people who love each other should not be allowed to marry if they have matching genitals.

“Pope Francis thanked me for my courage and told me to 'stay strong,'" said America's Martyr of her meeting with the Cool Pope.

"Thank you for your courage," she claims he then said.

Rosaries Kim Davis says Pope Francis gave to her and her husband Joe during their meeting last week.

The Vatican confirmed on Wednesday morning that yes, the visit really did take place, as reported by Davis and her cronies.

Here's the official statement from Kim Davis' camp via Liberty Counsel, the legal nonprofit that represents Kim Davis and her husband, Joe.

The Pope met privately with Kim Davis and her husband, Joe, at the Vatican Embassy in Washington, D.C., on Thursday, September 24, which was the birthday of Kim’s father. Pope Francis spoke with Kim and Joe Davis in English.

During the meeting Pope Francis said, "Thank you for your courage." Pope Francis also told Kim Davis, "Stay strong. He held out his hands and asked Kim to pray for him. Kim held his hands and said, "I will. Please pray for me," and the Pope said he would. The two embraced. The Pontiff presented Kim and Joe Davis each with a Rosary that he personally blessed. Kim's mother and father are Catholic, and Kim and Joe will present the Rosaries to her parents. Kim's mother was the elected Clerk of Court for Rowan County for 37 years until her retirement in 2014.

Kim Davis said, "I was humbled to meet Pope Francis. Of all people, why me?" Davis continued, "I never thought I would meet the Pope. Who am I to have this rare opportunity? I am just a County Clerk who loves Jesus and desires with all my heart to serve him." Kim said, "Pope Francis was kind, genuinely caring, and very personable. He even asked me to pray for him. Pope Francis thanked me for my courage and told me to 'stay strong.'"

More: The blog “Inside the Vatican” first broke the story. Washington Post, New York Times, and ABC News is making a big deal out of the fact that they interviewed Kim Davis about this pope crap.