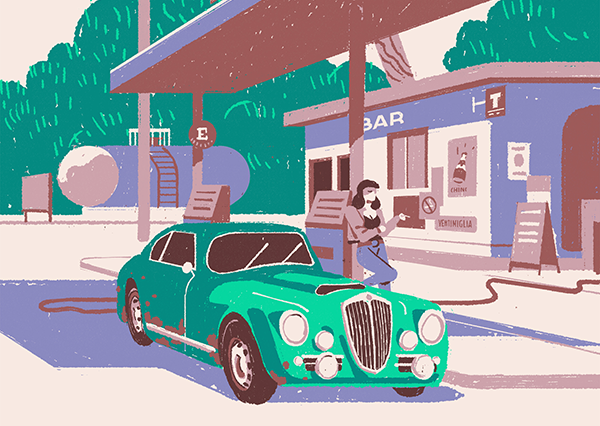 The driving hardly matters at all. I love Lella. If I'd known her I would have gone to France with her in a heartbeat.

I don't think my mother ever expected to have such a wild daughter as me. She's an accountant, and we have nothing in common. Maybe because of that, I hang onto what little I know of her teen years in the 1970s like flowers pressed in a book: Her summers in a seaside town, hitchhiking along the road at night with her troublemaker friend. The time my grandfather came to pick her up from the rest stop where she'd gone to hang out with boys, and how he thundered with disapproval.

Those are really the only stories I know about her childhood, except for the one where my grandmother forced her to wear a wool dress she despised. I don't know what it would have been like to become a woman right when Summer of Love was ending, with the roulette wheel of the road and strangers' cars your only real way out. Even now our instinct is to think that cars are usually for men. Video games about driving? Always for men.

But there is so much more about cars than driving; maybe it's better to say there is so much more to driving than just the car. I do remember when I got a car of my very own for the first time, and printed out a Google map—how powerful I felt that I could drive down the eastern seaboard to go visit a boy. Because I was a girl, a car meant more than simply an ordinary stage on some common, anticipated ascent to social power, the same way the red eyes of a vehicle slowing on a seaside road at night were more than just lights for my mother. They were a beckoning flicker; they were a secret her daughter would come to know years later.

Wheels of Aurelia is a driving game that is about that more. You are androgynous, mischief-lipped Lella, driving on the famous Via Aurelia from Rome to the French Riviera in 1978. Along with you is Olga, a femme you met recently at a disco. At the beginning of your trip she asks you why you invited her. You can ask her, if you want, why she accepted.

As the Via Aurelia curls and sprawls, Lella and Olga get to know each other, pick up hitchhikers, and get into road races. You as the player have two tasks: First, abstractly, to drive, which you can mostly do one-handed. It feels like being an adult woman, to drive one-handed, smoothly with the mouse. Most of your attention, the other hand, will be on the dialogue. Everyone, from Olga herself to the patchwork characters you may pick up along the way, wants to talk to Lella—they are drawn to her in the way people tend to seek out the queerest woman in the club—easy to speak to because she is "other", easy to experiment on, the receptacle for the car crash of anxiety and identity politics that come from being "a woman in the Pope's country", as Lella herself sometimes puts it.

Your choices for Lella's dialogue tend to be pleasingly subtle, mimicking the pall of delicate anxiety that can overhang people trapped in the same car for hours. You pick up a man who swears he's seen the Pope in a UFO. Your choices are not merely to "accept or reject" this person, but to make the elegant distinction between cheerfully affirming him and politely nodding along. As his behavior escalates, taking his side begins to feel genuinely radical, like a protest against a flawed mental healthare system, like shouting out the car window—who gets to decide whose strangeness is all right and whose isn't?

After all, you have yet to learn why Lella herself is on the road, what secrets her past contains. You can let this hitchhiker call you "Mamma". You can promise him, gently, that you will not take him back there.

All of Wheels of Aurelia asks you to consider your political attitude. Olga, the girl you like, says she can't be a feminist because she wears skirts. She might only be joking, and you can only joke back—either warmly, or with an unkind aftertaste. Eventually a sexist tough guy (Lella calls him only "prick") challenges your right to the road, and makes you race him. You and your straggling passengers, all of you trying to negotiate a complex, bittersweet and fundamentally unfair condition of life, talk as you press the accelerator. As you literally hurtle at breakneck speed for purchase against patriarchy.

Each session of Wheels of Aurelia is only about 15 or 20 minutes long, and will come to a natural end based on your decisions. There seem to be eight endings, but each session is different from the last, and you can have conversations in some games that feel suddenly new, no way to know how you unlocked them alongside the lawlessness of the road. Sometimes an encounter will interrupt what feels like a crucial dialogue point; you need to learn not to worry about the "flow" of the story, to embrace its risk of accident, of getting lost. Its jazz spontaneity liberates Wheels of Aurelia somewhat from the systematic feel that other choice-driven dialogue games have—last time I chose this, so this time I'll choose that instead—each trip is a brief flicker of curling road, of seawall and revving engine, a cigarette sometimes coming to Lella's lips, a rarely-seen flirtatious look. The wonderful original music—the insistent hiss of clanging drums, rock guitar, horns surging their punctuation—sounds out a life that almost feels like it could have been yours, in another time. If you had only been standing by the road in the right place.

In a nod to driving games of a different sort, you can even choose Lella's car every time you hit the Via Aurelia, and also add your three initials to a classic scoreboard with your completion times. But the driving hardly matters at all. I love Lella. If I'd known her I would have gone to France with her in a heartbeat.

Wheels of Aurelia is developed by Santa Ragione. You have just a few days left to buy it for pay-what-you-want as part of a remarkable Humble Weekly Bundle of indie games. If you do nothing else, vote for it on Steam Greenlight so it can be available there.