S.S. Adams invented over 700 practical jokes. Here's a great book about them 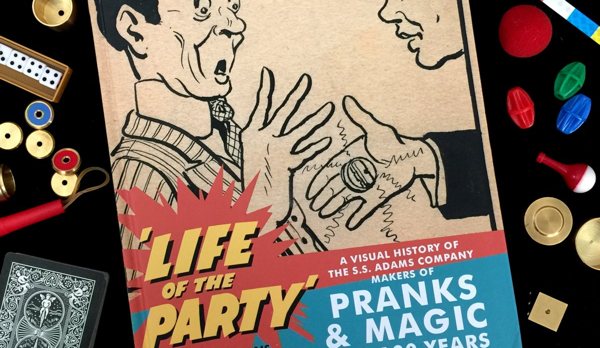 The S.S. Adams company gave Life of the Party author Kirk Demarais unprecedented access to its archives of tricks, gags, and ephemera dating back to the company’s humble beginnings as a manufacturer of Cachoo sneezing powder. Samuel Sorenson Adams sold 150,000 bottles of the stuff at ten cents each. The FDA eventually banned the powder, which contained a toxic ingredient called dianisidine. Undaunted, Adams went on to invent over 700 other practical jokes (many of which were awarded patents).

The photos of the many different magic tricks in Demarais’s book are the most appealing to me. Many of them are made from metal or wood and are beautiful and mysterious. I’m not a collector of anything, but I could become a collector of old magic tricks like this if I didn’t check myself. For now, I will content myself with this lavishly illustrated homage to a company that could only have thrived in an earlier century, when pleasures were simpler, and humor was broader.

Life of the Party: A Visual History of the S.S. Adams Company, Makers of Pranks and Magic for 100 Years