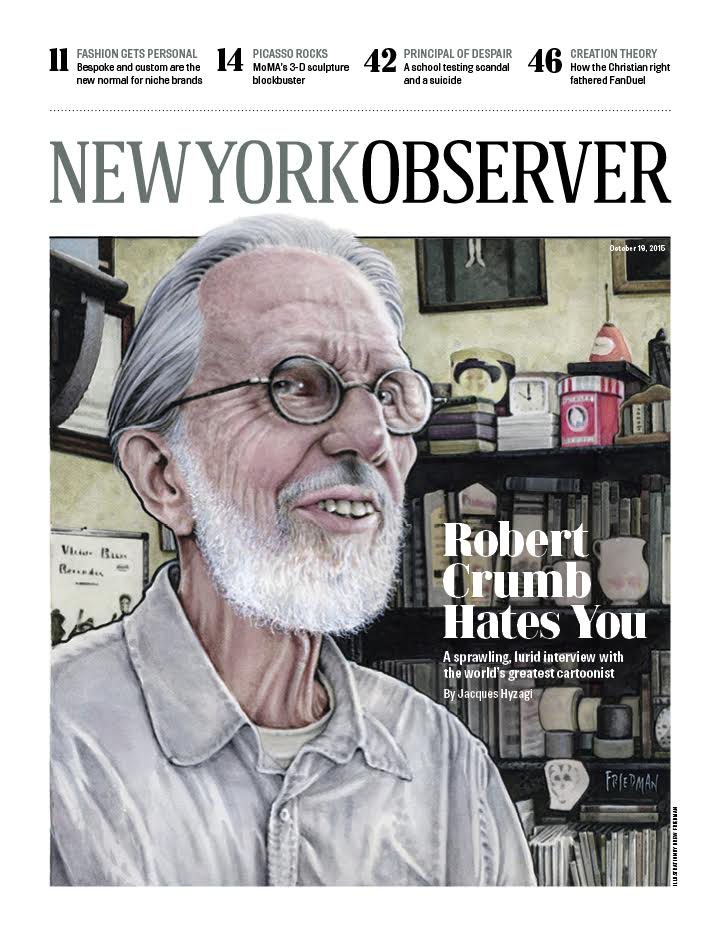 Jacques Hyzagi of The New York Observer has a long interview with cartoonist Robert Crumb. It's called "Robert Crumb Hates You." He's as cranky and fascinating as ever. The cover image was illustrated by the incredible Drew Friedman.

"I’m fascinated by the birth of the industrial revolution, the Victorian era too and this period when the Nazis occupied France. The documentary The Sorrow and the Pity by Marcel Ophuls is one of the best documentaries ever made, just people talking for hours, it’s fascinating, everybody should watch it. The Nazis could have never survived without the help of big banks and corporations, many of them American. If the Weather Underground was bombing banks I’m all for it as long as they weren’t killing too many people,” Mr. Crumb said.

“That was their creed at first, to bomb empty buildings,” I said.

“We should still bomb motherfucking banks,” he said.

“What did you make of Occupy Wall Street?” I asked him.

“I thought it was a worthy effort,” he said.

“I walked through Zuccotti Park and these fools were calling for ‘good’ banks, the church and Thomas Jefferson’s ideals.”

“That’s sad. 2008 was the biggest robbery in history and who goes to jail? Some poor black kid who stole some sneakers at a fucking Wal-Mart if he gets lucky enough to not get shot in the back on his way there,” Mr Crumb said, “A black kid recently in New York ended up at Rikers Island for stealing a backpack. He couldn’t make bond, always denied the charges, stayed at Rikers for years and after he finally got out, killed himself. Obama, in his final year in office, finally realizes that he spent his presidency trying to please the white man who hates him on sight, he did nothing to help black people.”