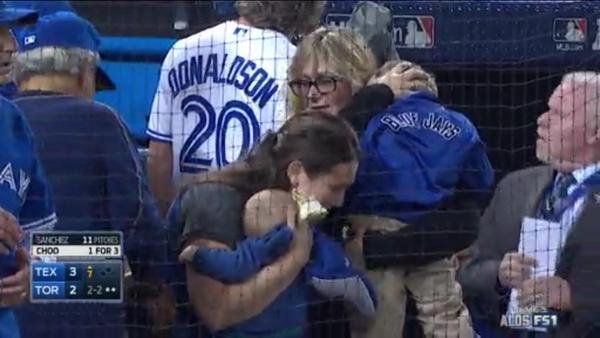 Beer from thrown can sprayed on this baby and mom at Toronto Blue Jays game.

Police in Toronto, Canada arrested a man at a baseball game for hitting a baby with the spray of a beer can he threw from his seat in the stands.

The baby was not hurt. Mom and child were in the front row of the Rogers Centre stadium when the man tossed the beer can in their direction.

As you can see from the video below, he was not alone. Many fans at this game were throwing beer cans and other objects.

That this happened in Canada is notable. Here in the United States, fans at sporting events can abuse our children with racial epithets and even physical assault with the confidence they'll not likely face any repercussions.

About the Toronto beer-thrower: They got him, the child is okay.

Constable David Hopkinson says the baby wasn’t hit by the can and is OK.

He says charges are expected against the man but none had been laid as of late Wednesday night.

@abalkovec @BlueJays @TorontoPolice FYI: The baby sprayed with some beer. Police have made an arrest and charges are expected. ^dh