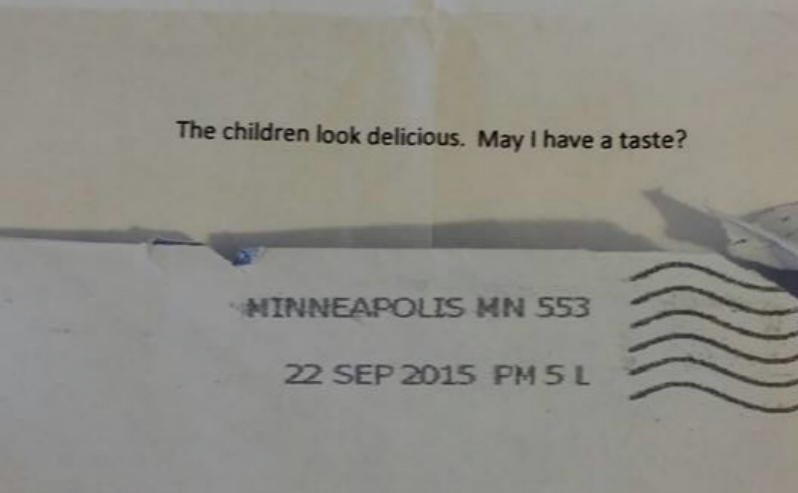 In the annals of inappropriate communications, anonymously sending threats to one's neighbors ranks highly. But few have ever ranked so highly as Carrie Pernula, who wrote "The children look delicious. May I have a taste?" in a letter mailed to hers.

The two yummy youngsters in question, according to CBS Minnesota, were elementary school-age children who had been noisy and left stuff in her yard.

Police say that Pernula, 38, admitted sending the note after the parents posted it to their hood's Facebook group and police asked.

To the individual who sent this letter...The answer is NO! NO you may not have my children in any way, shape, or form. And beyond anything physical you may NOT rob them of the security and comfort they feel. The trust they have in other people, or the joy they experience on a daily basis because of who they are. You DO NOT have the right to try to steal this from them by sending an anonymous letter trying to rip their world apart. I will NOT let that happen. What you MAY do, since you were so formal in your letter to ask, is you MAY turn yourself into the police, or you MAY seek help for your sexual and/or homicidal urges. Either way, the children of this community are off limits.

I like to write letters. Theselokta notecards are my favorite. I usually keep a few styles of lokta paper notecards around. The butterflies are particularly lovely and encourage me to find green ink. Usually, I write with Noodler’s Heart of Darkness, and ink that is designed to stand the test of time. Lokta paper is […]

My In-Laws Are Careless About My Deadly Food Allergy is a letter sent in to The Cut’s Ask Polly column. It’s the second-most amazing agony aunt letter I’ve ever read. I have a very severe allergy to mushrooms … Since then, most meals we have shared at my in-laws’ house have had very limited options […]