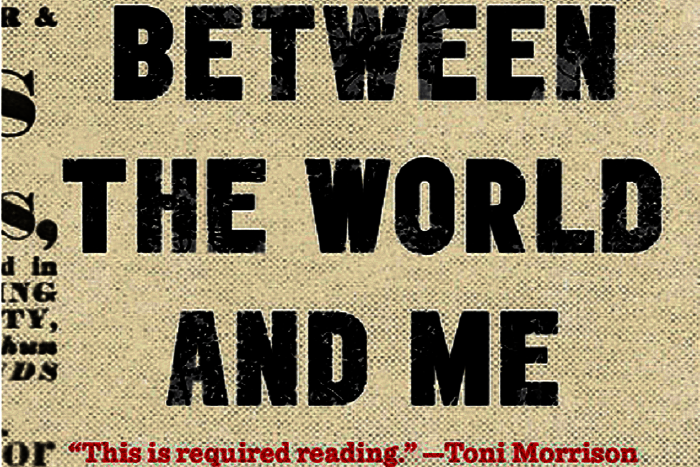 Between the World and Me is the memoir of Ta-Nehisi Coates -- certified genius and author of many seminal essays on race in America. It is a work of rage and beauty, and it should be the very next thing you read.

Between the World and Me is structured as a letter from Coates to his 15 year old son, written in a poetic and wise voice. It's modelled on James Baldwin's 1963 civil rights classic The Fire Next Time, which was a pair of letters to Baldwin's nephew, and the format serves both writers well, anchoring the wide-ranging political discussion in an intense and personal communique in which an elder desperately wishes to impart both bravery and caution to a younger man.

Coates writes as an atheist who was raised by activists, who grew up in the black neighborhoods of Baltimore and came to consciousness about race in America through a combination of patient instruction, parental beatings, first-hand experience, and the tragedy of his friend's death at the hands of a policeman who walked away from the murder without any consequence.

Coates's story is, above all, filled with his path to understanding. It's the story of how he came to understand the anger of his parents, the alienation of his peers, the violence of his streets. It's the story of how he reconciled with the faith of the civil rights pioneers who advised young men like him to allow their bodies to be passively smashed by racist billyclubs, how he came to understand America and its relationship to the stolen bodies and lives of his ancestors.

It's a lyrical book, and a rage-filled one, and its angry poetry makes it all the more compelling. Coates returns again and again to certain touchstones: his father, his time at Howard University (a largely black university in DC), his experiences with black people who had attained bourgeois respectability, the "dream" of white, middle-class America, and his all-consuming fear as a black man in America that the state, the police, could take his freedom or his life.

This fear is at the center of the message he wants to convey to his son. He wants his son to understand it, to be cautioned by it, to refuse to let it tame him, but to never forget it and put himself in needless risk. It's an agonizing conundrum, and agonizingly told, and viscerally conveyed.

Coates rips away the cliches of the discussion of race in America and goes for nuance and contradiction over easy answers. It's a revolutionary manifesto, a love note from a father to a son, and a long and glorious tale all in one.

I listened to Coates read the book in a DRM-free audiobook edition, and I thoroughly recommend it. Hearing a memoir read by its author, especially one with such a fine reading voice, is surely the best way to experience it.

Between the World and Me [Ta-Nehisi Coates/Spiegel & Grau]