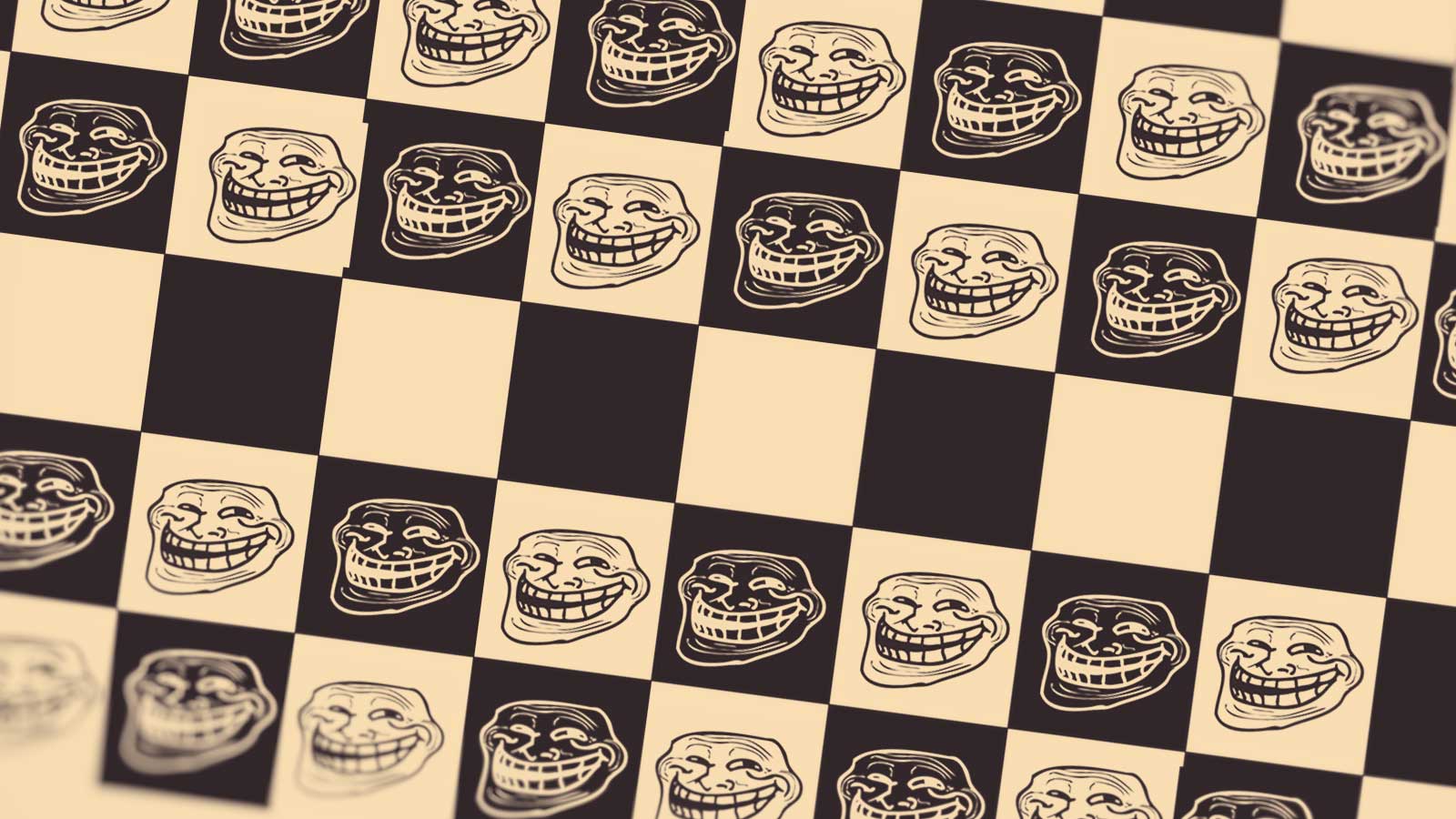 I was raised to play chess in the most boring way imaginable, with both sides developing their pieces into a big symmetrical knot before anything even gets taken. Worse, most chess books basically imagine you to play like a master, preparing your openings and exulting them on the basis of their success and failure at the international level.

Instead, everyday players should learn the flawed but brutal attacks of their ancestors, dashing gambits, and all the dirty tricks.

Here's a video of the Top 7 Aggressive Chess openings. The "unfashionable" King's Gambit comes in at #4 and is a great place to start for people wanting to rediscover chess as a brutal game of wits. It's the chess equivalent of kicking down a door and dashing in, arms windmilling at the enemy.

The first thing to know in being a chess troll, though, is to avoid the two tricks usually associated with cheap victories: Fool's Mate and Scholar's Mate. These don't even happen in pubs, are no fun at all, and the attempt is liable to make you the fool.

If you just want a ploy to get hated for, instead learn the Fried Liver Attack. This is your One Weird Trick for getting into fights at the kind of fancy parties where chess boards come out.

(If you're playing black and looking to deal with white smugly trying to Scholar's mate you, here's how to nail them.)

The Halloween Gambit is a good one to play in those generic "everyone calmly develops their knights" chess games that happen when all either player really knows are the rules.

But you know something else, you hustling fucker! All white has to do is "blunder" away a knight a couple of moves in to gain tempo (see pic), then pawn rush the enemy in the face. It's the sort of thing competent players look down on, but what's great about it is you never do anything that makes you look like a competent player, so the inevitable victories are maximally humiliating for one's opponent.

Pretend to be a cautious newbie with the Cabbage Attack, nudging all your pawns forward one square at a time until your frustrated enemy makes a stupid mistake. I really love this one and the general principle: be a giant, irritating hedgerow. Good players are not fooled but it's so very annoying for everyone else.

The Creepy Crawly Formation is a particularly effective way to make your foe think you're completely dumb:

This is the exact opposite of a cheap trap, but it's a super hustle for intermediate players. "Instead of memorizing move after move, sometimes it's good to remember core principles" such as playing slowly and annoyingly and pretending to be a creepy crawly thingy. Works great with the white pieces and the black pieces. (The Hippo runs along similar lines but is less ostentatiously daft and perhaps a bit too legit for blog posts about chess shenanigans.)

A great way to be the most annoying chess player anyone you know has ever met is to get good at bringing out the queen early and marauding around with it without doing any significant development. Here's a grandmaster, Hikaru Nakamura, trolling at the highest level.

The Monkey's Bum is not something that you'll get a chance to play much, but the name is so good it has to get mentioned.

A weak-looking but fine opening to lure opponents into bad play is the Hillbilly Attack, though if they ignore it you're liable to end up in the same old boring midgame knot.

If you've got 15 minutes and are sufficiently interested in chessing, International Master Veliri Lilov offers a tour of some "DEVASTATING" opening traps:

The Ponziani Opening is another one that looks like clueless beginner play, and useless against good players, but sharp in pub play, where it's been a classic for centuries. It's not very dashing, though.

A useful YouTube playlist to continue your studies is GJ_Chess's "Dirty Chess Tricks," but I've left the greatest prize here until last. If you really want to be a chess troll, read and absorb Winning with the Bongcloud.