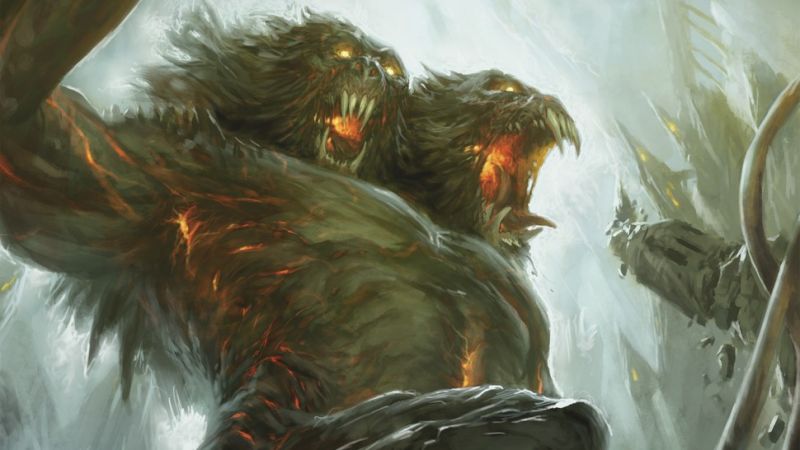 Out of the Abyss, which was created as a collaboration with independent games company Green Ronin Publishing, looks to be the first adventure that truly gets the play balance right. There’s dungeon crawl galore, but there’s also a compelling, over-arching plotline, with lots of atmosphere and role-playing opportunities. Whereas the previous two campaigns felt like old-school D&D adventures, Out of the Abyss feels a lot more cinematic and maintains an actual story arc with rising tension and plot development rather than just a series of progressively harder dungeons. It’s a lot like the R. A. Salvatore novels that the campaign draws inspiration from (Salvatore’s characters Drizzt Do’Urden and Bruenor Battlehammer make appearances in the book and related media; Salvatore also wrote novels that tie into the Rage of Demons storyline).

Escape From the Underdark

For prospective DMs, I’ll lay out the basic plot arc of the campaign below. Obviously, spoilers ahead; don’t read this section if you’re planning on playing Out of the Abyss as a PC at any time.

The characters are imprisoned along with a whopping ten NPCs — I say whopping because when the characters break free, the game recommends transferring control of all ten of them to the player characters themselves. In an average four-player game, that may mean that PCs are managing three to four characters apiece (including their own) for the first seven chapters of the adventure.

For a benchmark, in my current 5th edition D&D game, we have six players controlling one character each (their own), and it’s already getting frustrating, because each player has to wait a long time for their turn. Escalate this to each player having to manage three characters, and good luck keeping people away from their phones. The alternative is to have the DM manage the glut of NPCs, but then the DM is overburdened with a tedious and time-consuming task, and the players will still be waiting forever for their turn. The adventure recommends having PCs simply decide what the NPCs are doing, with the DM having final say; additionally, multiple of the NPCs may die, get lost or betray the party. Still, that’s a lot of extra paperwork, which a wise DM may want to modify in the interest of game enjoyment.

After the characters escape their pens, they find themselves lost deep in the Underdark, and now must spend the majority of the campaign trying to find their way out. It’s equal parts “Alice in Wonderland” and “Diablo,” and players can expect to be confronted with strange fungi, hook horrors, gnolls, derro, undead, kuo-toa, duergar, myconids, oozes, slimes, gelatinous cubes and the rest of the Underdark denizens from the Monster Manual, all the while being relentlessly pursued by their dominatrix-led drow captors. Along the way, they’ll encounter some wonderfully imaginative settings, from duergar cities to underground lakes.

This initial story arc comes to an end at Chapter 7, as the player characters confront their drow pursuers and escape to the surface world. This conveniently splits the adventure into two halves. The second arc picks up three months later, when the characters are summoned by Bruenor Battlehammer to explain what they’ve seen in the Underdark, and then return underground once again to face a new threat: A drow sorcerer has opened a dark portal that the Demon Lords have been pouring through. (For those old enough to remember: Yep, those are the very same Demon Lords from the first edition Monster Manual. The ones that helped provoke the 1980s Satanic Panic.)

By the time your group completes the session — if they survive, that is, as this has been hyped as “D&D on hard mode” — they’ll have outlived the worst the Underdark has to throw at them, plus toed off with the worst fiends in the Multiverse. And it should all have held together as a single, satisfying story — the equivalent of an enjoyable graphic novel series or a TV show binge-watch on Netflix, but actively created and enjoyed with your friends. And that’s what I love most about role-playing games.

Most noticeably, while the actual artwork in the book is quite good, a lot of it has been very, very poorly laid out: Blurry, unlinked Photoshop work, with bad clipping paths around images that look like they were stuck in last minute in a rush job by an intern using Adobe Creative Suite for the first time ever. That’s unfortunate for such a quality product with such a gigantic and expensive marketing push behind it. RPG books have always suffered from sloppy design, but this is an embarrassment, particularly as it’s a core release in the flagship line of the industry’s biggest company. On the other hand, the players need never see the art, so this will only annoy the actual purchaser of the book. But annoy it will.

My second comment is not a criticism but an open suggestion to Wizards of the Coast, if I may wear my professional marketer hat (psst, I’m on LinkedIn). I’m assuming that WotC has clear business analytics on who’s buying their product, but I’m wondering how clear their data is on how people are playing D&D, and how much of RPG adventure design is simply inherited thinking from the 1980s and 90s. Either through surveys, or possibly partnering with Roll20, I think WotC needs to get some clear data on how D&D is played in 2015, and to start tailoring adventures to the average play session. My guess is that people may well want adventures structured in shorter, punchier segments with a quick challenge/reward cycle.

Case in point: Back in junior high and high school, my friends and I could afford the time to play long adventures all night, pausing only for Pop-Tarts, watching “Heavy Metal” on VHS, and dueling each other with hand-made foam axes. We didn’t have responsibilities or girlfriends. These days, carving out D&D time is hard — with jobs, relationships, marriages, children and community activities to contend with, getting a group to commit to just four hours a week of D&D time on Roll20 takes considerable effort. That means that we can start to lose steam on adventures that are clearly meant to be played in long sessions on a regular schedule, and even with an experienced and mature group of players, it may take up to a month to complete a single chapter.

I also have no idea if D&D’s current target market is young people, or people my age. If RPGs are anything like the comic book industry, their core audience may still be people who aged along with their product and never grew out of it, while the younger demographic the product is theoretically designed for tends to stay away.

Visiting San Francisco last month, however, one of the first things I saw driving into town was a ten-year-old girl walking with her dad, carrying the 5th edition Player’s Handbook — what is this Age of Enlightenment??? And while that may wall be more indicative of Bay Area culture than American culture in general, it was still a clear sign of how much traction the new D&D is getting.

Wizards of the Coast is really pushing the idea of D&D adventures as cultural events, and opening the social experience RPGs can provide to as many people as possible, making the game inclusive instead of frightening and arcane. As D&D lead designer Chris Perkins said in a recent VICE interview, “Geek culture and nerd culture is now just culture.” That’s actually the most succinct, clear description I’ve seen of the overall cultural changes America has been through over the last two decades.

In that context, I suspect that RPGs may again become vitally important in our culture, particularly when people realize that they can be a non-threatening way of taking breaks from the electronic communication blizzard. Traditional RPGs are easier than meditation, less strenuous than hiking, and less expensive than socializing over drinks or food—making them, potentially, one of our best sanctuaries from our own culture.