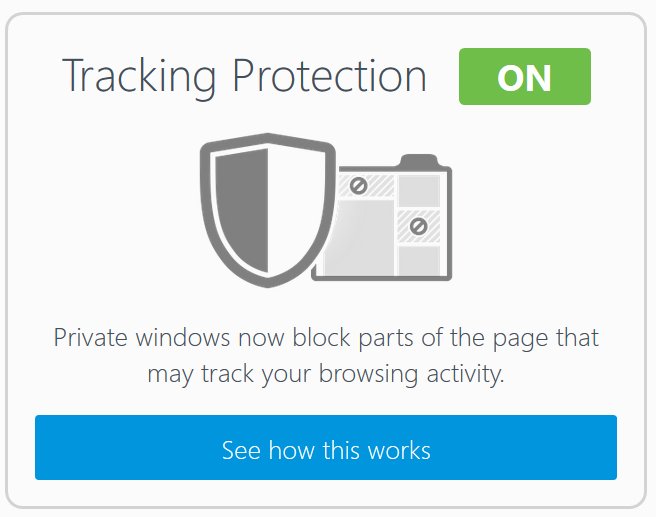 Mozilla has shipped a new version of Firefox whose private mode also blocks tracking beacons for ad networks, which will make private Web usage much harder to track.

In earlier privacy modes on Firefox and other browsers, ad-tracking beacons were fetched by the browser, but not allowed to read or set a cookie on the user's computer, making the user appear, in theory, as a never-before-seen person whose private activity couldn't be correlated with their previous profile. But ad networks often use non-cookie-based mechanisms for identifying users, including "evercookies" set in Flash, as well as "browser fingerprinting" that uniquely identifies users by their fonts, plugins, screen-size and other parameters that browsers can be tricked into revealing to remote sites.

Web users who had ad-blockers already received much of this benefit, but ad-blockers are notoriously memory-heavy and destabilizing for browsers. It'll be interesting to see whether Mozilla migrates this into normal browsing mode, as a native ad-blocker that users can turn off and on at will, tightly integrated with the browser itself. There's precedent for this: when Mozilla started shipping browsers with pop-up blocking turned on by default, advertisers and publishers were aghast, but the existence of a browser that delivered a better user experience spooked Netscape and Microsoft into following suit with their products.

The new private browsing mode is easy to disable for pages that appear broken when tracking is switched off.

We first added Private Browsing to Firefox to give you control over your privacy locally by not saving your browser history and cookies when you close a private window. However, when you browse the Web, you can unknowingly share information about yourself with third parties that are separate from the site you’re actually visiting, even in Private Browsing mode on any browser. Until today.

Private Browsing with Tracking Protection in Firefox for Windows, Mac, Android and Linux actively blocks content like ads, analytics trackers and social share buttons that may record your behavior without your knowledge across sites.