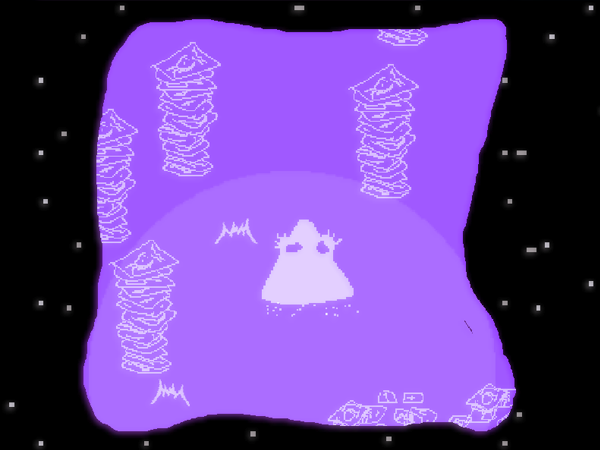 Llaura DreamFeel is an independent developer who has a unique sense of structure, and Istanbul, Texas is a simple but deep work.

If you want to tell a sad, fraught story, does it need to be through a video game? Not always—but Llaura DreamFeel is a creator who has a unique, refreshing grasp on the little spaces that open up in games that can't be created in other media, and she makes profound and considered aesthetic choices with her works.

Last year, her game Curtain affected many: The story of two girls in a Glasgow punk band, the game is consciously both bright and glitchy and tightly-framed, two choices that help tell the story of an abusive relationship.

Her writing style seems to make even abstracted sketches of human beings feel grounded, plausible, in a way I haven't quite experienced through more traditional 'game dialogue' ("people who like good music usually don't take the time to become good people" is a particularly jarring quote). She has a masterful sense of structure, too, and her newest work, Istanbul, Texas, is a brief but strong example.

You play a man returning to Donny's Discount Dungeon (formerly Donny and Dave's Discount Dungeon), a record shop that you may or may not have burned down, to see what's left. One song makes you want to tear down everything you find; one song makes you feel hopeful to rebuild. Saying any more about the game itself would probably ruin the delicate experience, but the tension DreamFeel has built between the man's two states of being is unexpectedly palpable.

It's the way the character drifts independently, a train wreck who can be influenced by the player's movements, but never wholly controlled. His sprite is indistinct, a sort of continuously-weeping raincloud with two grasping hands.

"I had never made rough and ready lil characters and art like this before, literally scribbling pixels until I hit something I liked. And I just threw out everything I didn't," says DreamFeel, who also tells me Istanbul, Texas' initial conceit came to life while she was delirious with food poisoning, trying to design a game that would capture the cathartic push-and-pull of getting sick and then feeling briefly better til the illness rises again.

"This idea of structuring a story is always really important to what I do, and I was thinking about how could I use music to that end," she continues. "Usually music just becomes this background texture to a scene unless the game responds to it directly (or the music responds directly to the game).

"I realized another way to give structure with music would be to use two songs intentionally juxtaposed against each other. Everything came from that. Particularly the first song, Yaylalar by Selda Bagcan, helped develop the story a lot."