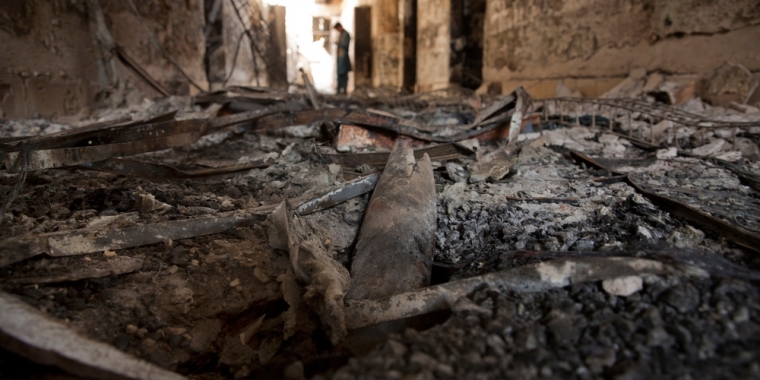 Doctors Without Borders released an internal report today that claims a U.S. warplane shot at people who were trying to escape the international medical aid group's hospital in Kunduz, Afghanistan, after the building was bombed by American forces.

The airstrikes took place in October, and killed 30 Doctors Without Borders (MSF) staff and patients.

President Obama issued an apology to Doctors Without Borders a few days after the attack. The military issued a statement that “several innocent civilians were accidentally struck” by airstrikes. The Pentagon called the strike “a mistake.”

MSF said, basically: Thank you but we want an independent investigation.

“We need to know whether the rules of war still apply,” said MSF today, as it released its internal report to the public.

The full report is here, in PDF.

From the MSF's statement today:

Hospitals have protected status under the rules of war. And yet in the early hours of 3 October, the MSF hospital in Kunduz came under relentless and brutal aerial attack by US forces.

Patients burned in their beds, medical staff were decapitated and lost limbs, and others were shot by the circling AC-130 gunship while fleeing the burning building. At least 30 MSF staff and patients were killed.
This week, MSF concluded an initial review of the facts before, during and in the aftermath of the airstrikes. Although our internal review is an ongoing process, we have decided to share these initial outcomes with the public, to counter speculation and to be transparent. Details that could identify individuals have been removed. Explanatory footnotes have been added in places where an external reader may need additional clarification.

The facts compiled in this review confirm our initial observations: the MSF trauma centre was fully functioning as a hospital with 105 patients admitted and surgeries ongoing at the time of the US airstrikes; the MSF rules in the hospital were implemented and respected, including the ‘no weapons’ policy; MSF was in full control of the hospital before and at the time of the airstrikes; there were no armed combatants within the hospital compound and there was no fighting from or in the direct vicinity of the trauma centre before the airstrikes.

What we know is that we were running a hospital treating patients, including wounded combatants from both sides –this was not a ‘Taliban base.’

The question remains as to whether our hospital lost its protected status in the eyes of the military forces engaged in this attack - and if so, why. The answer does not lie within the MSF hospital. Those responsible for requesting, ordering and approving the airstrikes hold these answers.

We know that there were many different forces fighting in the area around our hospital: special forces, regular army, police and the armed opposition. Each of these forces may have been operating according to different understandings or interpretations of how international humanitarian law applies to medical work in war. Any ambiguity has deadly consequences for our ability to work on frontlines.

What we demand is simple: a functioning hospital caring for patients, such as the one in Kunduz, cannot simply lose its protection and be attacked; wounded combatants are patients and must be free from attack and treated without discrimination; medical staff should never be punished or attacked for providing treatment to wounded combatants.

On 7 October 2015, MSF launched a call for an independent investigation by the International Humanitarian Fact Finding Commission. Although the IHFFC has made itself available for an investigation, the United States and Afghan Governments have yet to consent to this request. Consenting to the IHFFC is a critical step in demonstrating a commitment to the Geneva Conventions. Today, we are handing over this internal report to both the public and the IHFFC.

The attack on our hospital in Kunduz destroyed our ability to treat patients at a time when we were needed the most. We need a clear commitment that the act of providing medical care will never make us a target. We need to know whether the rules of war still apply.