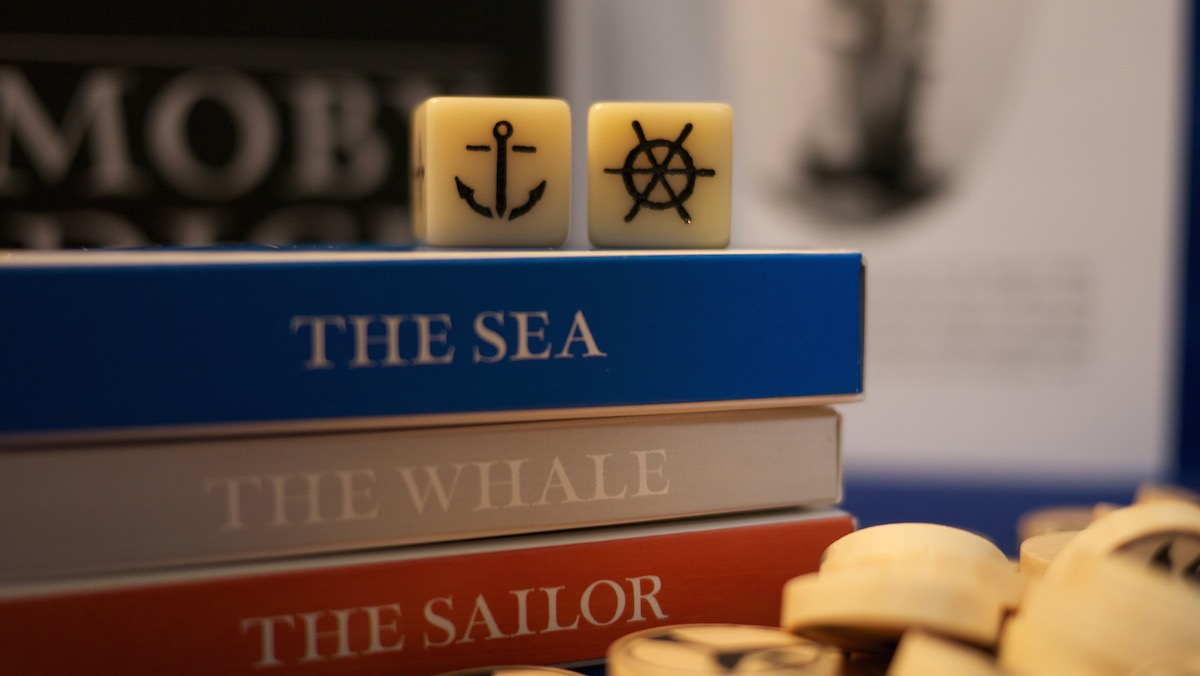 Confession time: I’ve never read Moby Dick. I’ve meant to. I’ve tried to. I’ve even made significant headway. But I have yet to actually finish the novel. You might say that completing it is my white whale. Ahem. Apologies.

The point remains though, that even though I’ve never read the book, I know the story. I know the characters and I can make (most likely incorrect) references to elements from the book. Which is why, when I came across the Kickstarter campaign for Moby Dick, or The Card Game from King Post, I opted to back the project.

The delivered and currently available-for-purchase game is beautiful. 107 cards, 2 dice, and 40 oil tokens, plus rules make up the core set. The quality put into the components is outstanding – my set has been through numerous play throughs and still looks as clean and pretty as the day I got it. In fact, just in terms of art, this is one of the prettiest games I own.

But, how does the game play? This game will take some time and effort to play. Initial set-up is fairly easy and mainly involves putting a few key cards on the table. From there, crew selections are made. This is a longer process and where experience will come into play. Once the crews have been chosen, cards from The Sea deck are brought into play, putting the assembled crews through events pulled directly from the novel. If a whale card is pulled, the third part of the game, The Hunt, is brought into play. It is (for me) the most fun as it involves Ahabing around trying to get the whale before it gets you. Assuming you survive, you go back to choosing and optimising your crew and set off onto the open seas once again.

But the real question is, did playing the game make me more interested in the novel? Yes and no. I often play the (officially unofficial) solo rules because I enjoy the art and the story quite a bit. I like this concept of taking works of literature and turning them into games (the same company has also done Beowulf), but I haven’t made any more progress with Moby Dick, or The Whale. But I will. One day. Even if it kills me.

$35 Buy the game from The Card Game’s official site