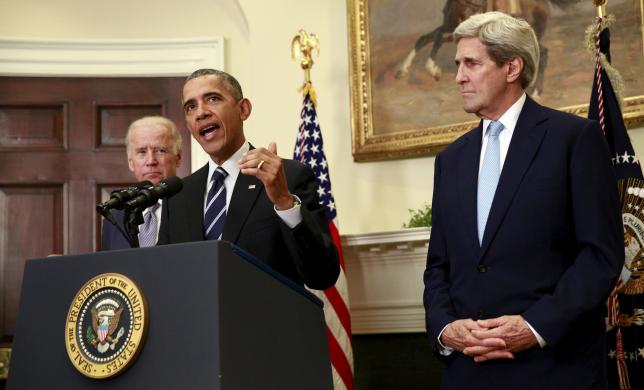 In a decision that environmental activists see as a hard-won victory, President Obama today announced he is rejecting the request from a Canadian company to build the Keystone XL oil pipeline. The news ends a seven-year review process that was a focal point in the debate over the Obama administration's climate policies.

"America’s now a global leader when it comes to taking serious action to fight climate change," the president told reporters, in the Roosevelt Room next to Vice President Biden and Secretary of State John Kerry.

"And frankly, approving this project would have undercut that global leadership. And that's the biggest risk we face, not acting."

Obama said now is the time to “protect the one planet we’ve got while we still can.”

The move was made ahead of a major United Nations summit meeting on climate change in Paris in December, when Mr. Obama hopes to help broker a historic agreement committing the world’s nations to enacting new policies to counter global warming. While the rejection of the pipeline is largely symbolic, Mr. Obama has sought to telegraph to other world leaders that the United States is serious about acting on climate change.

"The pipeline would not make a meaningful long-term contribution to our economy." —@POTUS on rejecting the Keystone XL Pipeline

"The pipeline would not lower gas prices for American consumers. In fact, gas prices have already been falling steadily" —@POTUS on Keystone

"Shipping dirtier crude oil into our country would not increase America’s energy security." —@POTUS on rejecting the Keystone XL Pipeline

"We’ve doubled the distance our cars will go on a gallon of gas by 2025." —@POTUS #ActOnClimate

"A bipartisan infrastructure plan...could create more than 30 times as many jobs/year as the pipeline" —@POTUS on the Keystone XL Pipeline

"If we want to prevent the worst effects of climate change before it’s too late, the time to act is now." —@POTUS https://t.co/yyUhBOVTc8

"The @StateDept has decided that the Keystone XL Pipeline would not serve the national interest of the United States." —@POTUS #ActOnClimate

"If we want to prevent the worst effects of climate change before it’s too late, the time to act is now." —@POTUS https://t.co/yyUhBOVTc8

If you love tech gear, it can be difficult to live the green consumer life you want to be living. How can you fuel your desire to upgrade without contributing to the negative environmental impact the endless production of electronics causes? Shop refurbished. You might think, “Meh, I’ll pass on a used, busted up computer.” […]