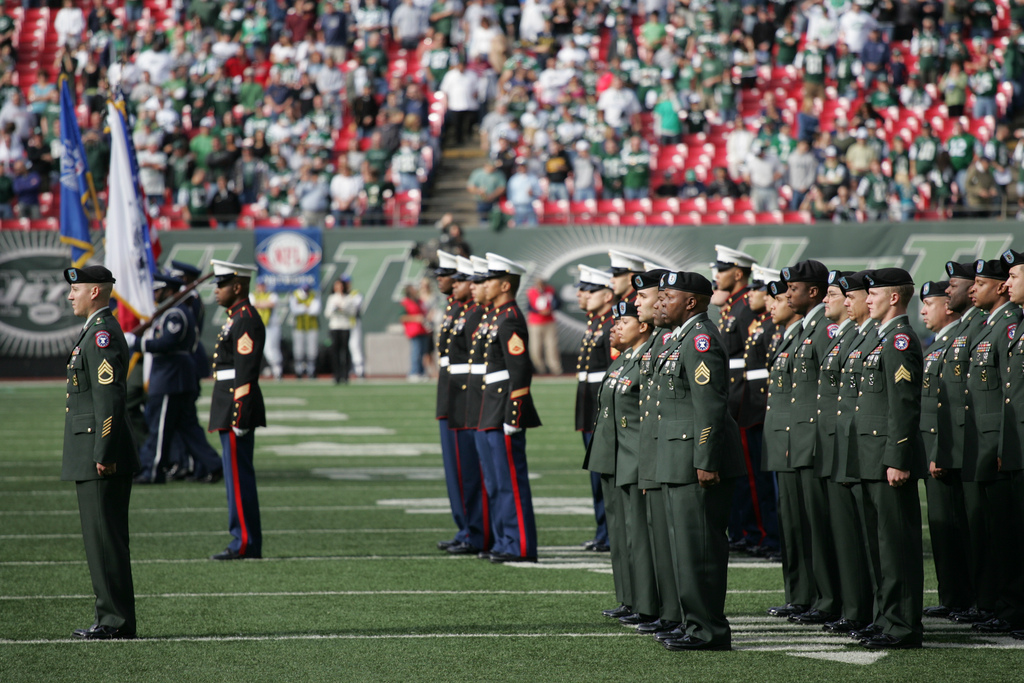 EAST RUTHERFORD, N.J. — Marine Corps, Air Force, Navy, Coast Guard and Army service members stand at attention and salute during the singing of the National Anthem on the field at Giants Stadium for a pre-game ceremony honoring veterans, Nov. 15. A Coast Guard detachment sang the National Anthem and were joined by a joint-service color guard before the New York Jets game against the Jacksonville Jaguars. Chief Master Sgt. James A. Roy, Chief Master Sergeant of the Air Force, presented the coin for the pre-game coin toss.(Official Marine Corps photo by Sgt. Randall A. Clinton)

Those big, splashy shows of gratitude to America's soldiers at halftime? They're the best patriotism the taxpayers' money can buy.

As much as $6.8M has been spent by the Department of Defense on secret payments to pro sports teams in exchange for tributes to the military over the past four years. The DoD won't discuss the particulars, though they are being probed by Arizona GOP senators John McCain and Jeff Flake.

It's a particularly insidious practice. On the one hand, you have these corrupt, scandal-haunted sports leagues collecting millions of tax dollars for phony displays of seemingly spontaneous patriotism. On the other hand, you have America's increasingly precarious and debt-haunted children being lured into military service in part by these displays, which suggest that America's institutions are far more interested in their willingness to die and kill than is actually the case.

After first uncovering DOD’s payments to teams, McCain and Flake attached an amendment to the National Defense Authorization Act for fiscal year 2016 earlier this year to prohibit the Pentagon from spending taxpayer money to honor soldiers at sporting events. It also would have pressured the professional organizations paid in taxpayer money to donate those profits to groups supporting the armed forces, veterans and their families. Congress passed that defense spending bill last month, with the “paid patriotism” provision included, but President Barack Obama vetoed the bill for reasons unrelated to the amendment. The amendment remains in the legislation, McCain said Wednesday, and would become law if Obama signs a new version of it.

The NFL has previously said the McCain-Flake amendment “paints a completely distorted picture of the relationship between NFL teams and our military.” In a Nov. 2 memo that is included in the report and addressed to McCain and Flake, NFL Commissioner Roger Goodell responded to the senators’ concerns that traditional marketing efforts “have not been kept separate” from displays meant solely to honor troops. The NFL issued guidance to teams in July that they shouldn't include such activities in their contracts with the military.

“We strongly oppose the use of recruitment funds for anything other than their proper purpose,” Goodell wrote, adding that the NFL will audit its teams’ government contracts and refund any money paid out inappropriately.

At a news conference Wednesday, McCain and Flake stressed that the sports leagues were more cooperative with their efforts than the Pentagon, which "was unusually and especially aggressive when trying to withhold this information," McCain said. That makes it hard to know exactly how much the Defense Department has spent on these activities, they said.

The senators note in the report that while the DOD and NFL said the purpose is to boost recruiting, the Pentagon has no measurement on whether the activities paid for are in fact contributing to recruiting.