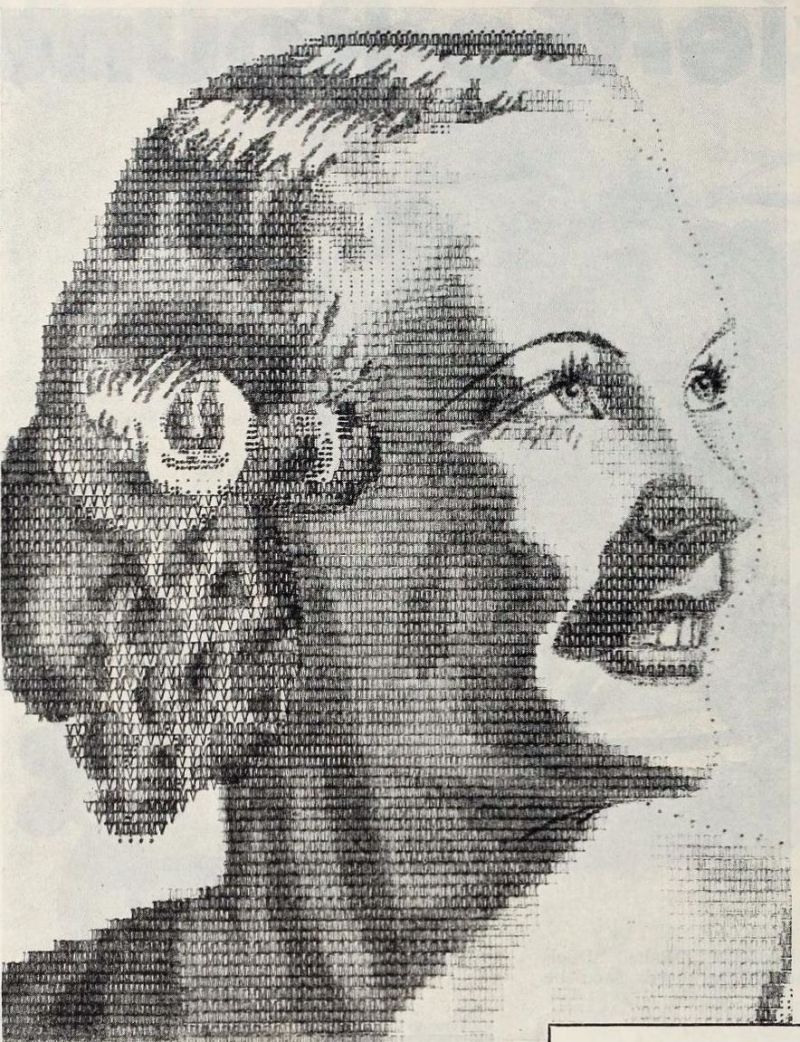 In 1919, a 16-year old LA Times office boy named Kenneth Taylor was given a back-page spread to show off his typewriter portraits of film stars; Taylor's work then spread to Photoplay, and a new medium was born.

We've been writing about typewriter art for years, and Andrew Heisel says he was so taken by our stories that he wrote a long, fascinating feature article on the history of the form, and its most colorful practitioners.

On the way, he dug up the story of prizewinning typewriter portraitist Adrienne Cadoul, whose family was bankrupted by a con artist named Eleanore Rosencrantz who bilked her father out of every cent he had by sending him letters from her cell in San Quentin. Cadoul's tale is just one of many that Heisel tells in recounting his history of this early technological art-form.

The charm of old movie fan magazines is their sweetness. Their pages may have hinted at all sorts of sordid behavior, but their tone matched that of their most guileless reader—and they incorporated reader perspectives in every issue, printing copious letters and even occasionally letting readers share their own homespun pictures of the stars. This portrait, for example, is from the October 1920 issue of Motion Picture Magazine and is one of the older examples of typewriter or ASCII art you’ll find.

It’s lovely, and all the more so for all the little mistakes. The magazine says nothing about Arthur Paul Jr. or why he gave them the image, but you get a hint of him in those odd Ms and Os sticking out. What was he going to do, tear the paper out and start again? Forget it, he must have thought; just keep going; it’ll have to be good enough.

Motion Picture apparently agreed, and it wasn’t alone in deploying this new art. Several other magazines tried out these keystroke portraits over the years. The medium was ideal for representing faces that were already familiar, giving the stars a new look and their artists a snatch of fame.

The artist who first introduced typewriter art to the film fan world was a 16-year-old named Kenneth Taylor. An office boy at the LA Times, he typed the pictures up when he had a free moment at work. The paper gave him a back page spread in January of 1919, and then Photoplay gave him one in that June’s issue. “Try This Over on Your Remingwood,” the headline read. Taylor shared portraits of Dorothy Gish and Bill Hart alongside the following portrait of Charlie Chaplin, which took about twenty minutes “pay-roll time, of Kenneth’s working hours”: