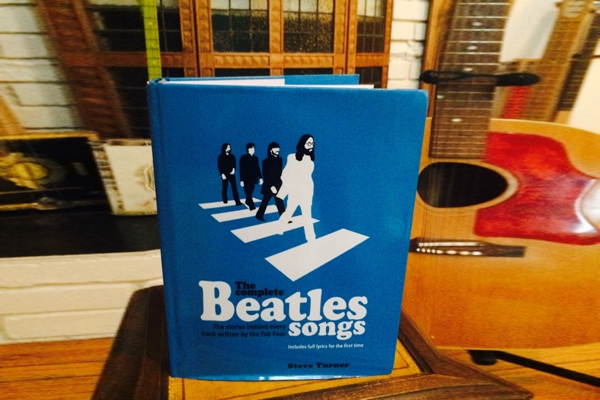 The Complete Beatles Songs has gone through several editions over the last 20 years as author Steve Turner continues to dig deeper to find the origins and meanings of every song the Beatles wrote. I’ve read a few books about the Beatles and I was surprised to learn so many new things and see so many photos I’d never seen before.

The book has turned out to be Turner’s life project, and it's worth it. Turner interviewed hundreds of people and pored over warehouses of archives to learn the often surprising and fascinating circumstances that led to the lyrics behind the band’s songs.

For instance, here’s how Lennon came up with the title for the song "Happiness is a Warm Gun":

The final section was inspired by something in an American gun magazine that George Martin had pointed out to him. There was a line on the cover reading “Happiness is a warm gun in your hand...,” an obvious play on Peanuts cartoonist Charles Schulz's 1962 book Happiness is a Warm Puppy. The apparently bizarre juxtaposition of killing and pleasure stimulated John's imagination, especially coming at a time when America was involved in a war. "I thought, what a fantastic thing to say," said John. "A warm gun means that you've just shot something."

If you have made up your own meanings for the Beatle’s beautiful lyrics, this book will destroy them. Read it at your peril.

The Beatles: The Singles Collection is an upcoming box set of 23 vinyl 7-inch discs, including all 22 singles issued in the UK between 1962 and 1970. You can pre-order on Amazon for These singles, plus an exclusive new double A-side single for the mid-1990s-issued tracks “Free As A Bird” and “Real Love,” are newly […]

50 years ago, a boy named Brian stole a copy of Life magazine from an Ohio library that sported a photo of The Beatles on its cover. But this week he decided to give the book back, along with an apology note: “Hello. I stole this magazine from the Parma Ridge Road library when I […]