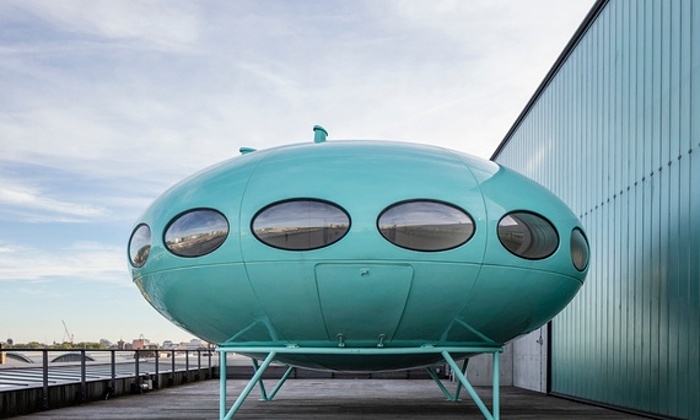 The spaceship-shaped home — part of the gorgeous tradition of flying-saucer architecture that includes Buckminster Fuller's amazing Dymaxion house — is now installed on the roof terrace of Central St Martins, where it serves as a meeting room/presentation space in which to hold seminars about the house of the future (among other futuristic subjects).

Tickets to the lecture series are £3 each.

In a year of future-gazing, everyone attending performances, talks and events at the Futuro house will be encouraged "to speculate on future possibilities and inevitabilities". This will culminate in a Slivers of the Future chronicle recording ideas on what the future might hold on CSM's Futuro website .

"The pure fun of having a flying saucer on our roof will generate some fantastical projects by the students, as well as thought-provoking and challenging debate on where we go from here," says Prof Till. "It brings a smile to everyone who sees it, and acts as a catalyst for future thought and action."