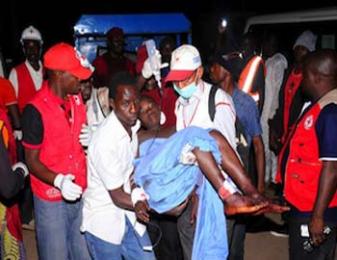 The blast Tuesday night in a predominantly Muslim region of the West African nation ends three weeks there without explosions, after a series of suicide bombings ended with attacks on mosques in two northeastern cities. The Oct. 23 explosions killed 42 people and wounded more than 100, said Nigerian authorities.

One of the mosques attacked was in Yola, capital of Adamawa state, where the insurgents struck again on Tuesday.

At least 32 people were killed and about 80 wounded victims were evacuated to hospitals, coordinator Sa’ad Bello of the National Emergency Management Agency told the AP.

A woman breastfeeds her baby after being rescued from Boko Harm, near Mubi, northeast Nigeria. Oct. 29, 2015. REUTERS

Red Cross official Aliyu Maikano and residents told AFP the targeted area was a truck stop on a well-traveled shipping route that also houses a livestock market, an open-air restaurant and a mosque.

The area was immediately cordoned off but poor power supply in Yola meant the rescue effort was conducted in near darkness.

"Victims could be lying all over the place," Maikano said.

"The ground near my shop was covered with dead bodies. I helped to load 32 dead bodies into five vehicles," witness Alhaji Ahmed, who owns a shop in the market, told Reuters.

People who had been held hostage by Boko Haram receive aid, during a wave of strikes in October. [Red Cross]

Glorious video of wildebeests on their great migration in Tanzania, stomping across a river by the thousands.

There’s no way to explain this any better the creator, Franzoli Electronics, explains it in the description: The main loud music really comes from the tesla coil sparks. They are literally playing the music due to the programmed phase, pulse width and firing frequency! So, there are no speakers, no audio / video special effects. […]