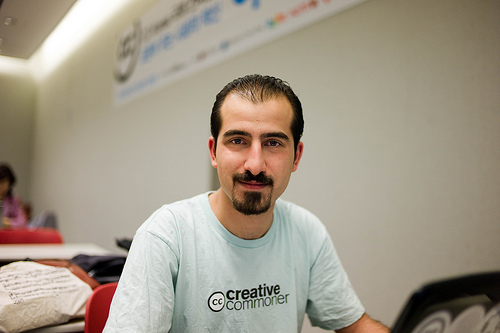 Khartabil has been imprisoned in a Syria's Adra Prison since 2012, though as of October, he has been transferred to an undisclosed location. The free software/open culture activist was the lead for Creative Commons Syria and has contributed to Wikipedia, Firefox and many other projects.

He was arrested on the first anniversary of the Syrian uprising, and was tortured for five days by Syria's Military Branch 215 and was tried, without access to counsel, on charges of "harming state security." His arrest and detention have been widely decried; the UN Working Group on Arbitrary Detention has called for his immediate release.

Noura Ghazi, Khartabil's wife, a human rights lawyer, reports that he has been secretly sentenced to death by a military tribunal.

I've just gotten disturbing and shocking news that Bassel has been sentenced to death. I think this means that the transfer to military prison was very dangerous. I really don't know other news. May God help him, we hope it's not too late. We are worried sick about his life. (from Bassel's wife, Noura's page) ‪#‎FreeBassel‬

Urgent: Reports that Bassel Khartabil has been sentenced to death »
[Joi Ito]