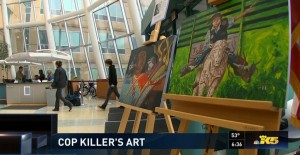 Paintings by incarcerated Native activist Leonard Peltier have been removed from the walls of the Washington State Department of Labor and Industries in Tumwater following complaints form a group of retired FBI agents.

Peltier is serving two life sentences for the 1975 murder of two FBI agents during a political action by American Indian Movement activists. His conviction has been widely criticized as unfair; Amnesty International considers his trial to have been an "unfair trial."

The National Coalition Against Censorship has sent the Washington State government a letter informing it of its duty under the First Amendment not to censor work merely because it offends government officials, current or retired.

In a government building, where a public forum was made available for expression, public officials cannot single out and remove the expressive work of one of the exhibition participants just because some people dislike that participant. The First Amendment undeniably protect the right to exhibit work that might disturb, annoy, or offend government officials. As the U.S. Supreme Court has affirmed, "If there is a bedrock principle of the First Amendment, it is that the government may not prohibit the expression of an idea simply because society finds the idea itself offensive or disagreeable." (Texas v. Johnson, 491 U.S. 397, 414, 1989)