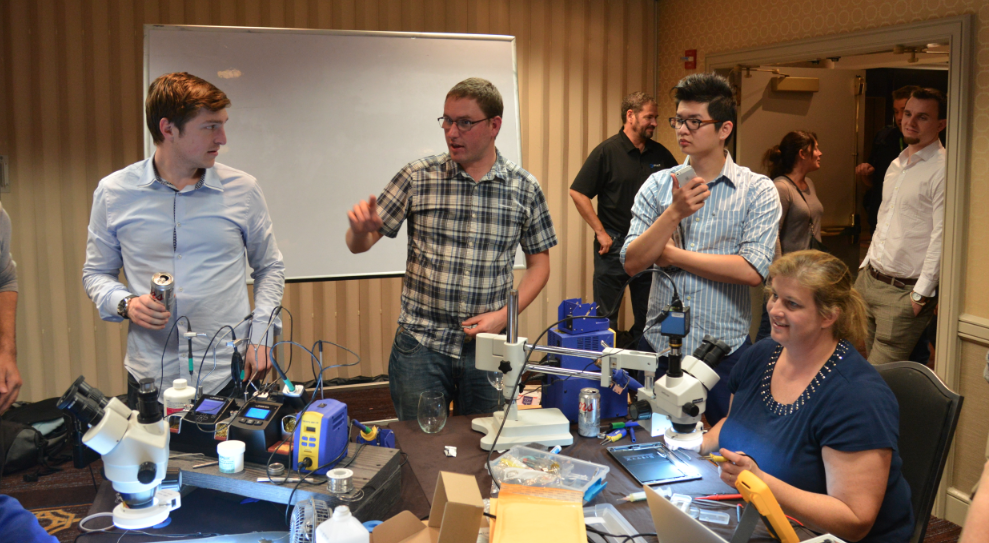 Motherboard's Jason Koebler follows Kyle Wiens around the Electronics Reuse Conference -- Burning Man for the service-people who fix your phones, laptops, and other devices -- in New Orleans. Wiens is founder and CEO of Ifixit, whose mission is to tear down every single thing you own, write a repair manual for it, and source or manufacture the parts you need to fix it yourself.

Wiens is a culture hero of the 21st century, a maker's maker, and a staunch defender of and evangelist for the right to repair. He does war on the pentalobe, a stupid, proprietary screw that Apple uses to stop unauthorized parties from cutting in on its billion-dollar-a-year Iphone repair business, blowing the whistle on the company when it instructed its Genius Bar geniuses to covertly replace old, normal Iphone screws with the proprietary alternatives without telling their customers, then manufacturing his own pentalobe-driver that you can buy and use for your own phone.

Koebler's profile of Wiens is sensitive, wide-ranging, and excellent. It captures the thrill and satisfaction of fixing your own stuff, the environmental devastation and rent-seeking that of repair-proofing our gadgets. Repair is a non-offshoreable industry: you can't send your phone or car or laptop around the Pacific Rim to get it fixed. Irepair enables the world's makers to earn a decent middle-class living offering a decent service to their neighbors.

Wiens and his partner, Luke Soules, decided to find every iBook and PowerBook, write repair manuals for them, and sell them for $15 a piece. It didn't go too well—they never sold out of their original 50 manuals. But then they put them online for free, got picked up by a few Apple news blogs, and suddenly became the go-to source for this type of information.

"This whole thing is an end around copyright. We decided as a result of our research in developing world that what the world needed was an open source repair manual for everything," he said. "There's two ways of doing that—you get the manufacturers to open source their documents, or you write a new one. We have not given up on the first one, but we have focused our efforts on the second."

To that first point, iFixit has become one of the most outspoken companies advocating for DMCA reform, and won a small victory earlier this month when the Librarian of Congress granted several exceptions to the law that protect "the right to repair." iFixit specifically defeated the copyright use case that John Deere was lobbying for—farmers can now fiddle with their tractors without fear of being sued. Now, the company is pushing for state-level legislation that would require manufacturers to sell repair parts and provide service manuals.

Few small companies whose business model is to directly antagonize the world's largest companies have done very well. Even fewer have thrived.

How to Fix Everything
[Jason Koebler/Vice]