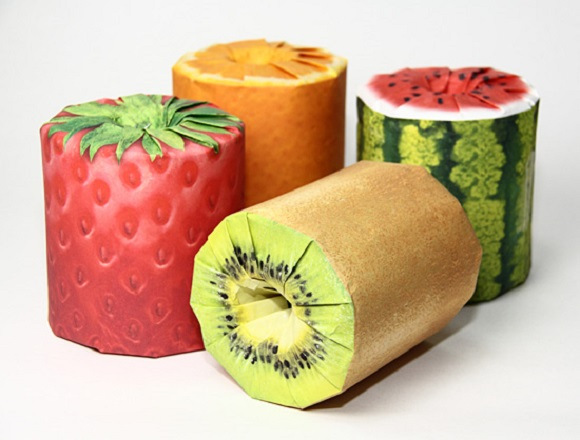 Most folks use paper,

Some use their hand,

Outdoors they use leaves,

In the desert they use sand.

But what about fruit? You've never wiped your keister with a kiwi?

They make every thing for every purpose in Japan, and now they're making fruit toilet paper. The original article on Rocket News notes that the company which created this bit of fruity foolishness won a design award of note for the product.

The simultaneously strange and endearing qualities of Japan are laid bare in this quote from the manufacturer's website, so helpfully pointed out by Rocket News: "Latona Marketing says of their sweet creation 'Many companies and stores throughout Japan give a roll of toilet paper to customers as a novelty gift to show their appreciation.'"

I want you to try that this upcoming holiday season and let me know how it goes.

You can buy this unique gift here. Unfortunately they are not scented. So while fruity they may look in the bathroom, fruity they will not smell.

Many people around the world use bidets so they can clean themselves properly after using the toilet. I discovered them in the 1980s in Japan and I installed them in the toilets in my house. (I have the cold-water version, which doesn’t require electricity. They cost just [amazon_link asins=’B01A17T3N6′ template=’PriceLink’ store=’boingboing’ marketplace=’US’ link_id=’53065460-75ef-4133-962b-594d344a2f69′] and are […]