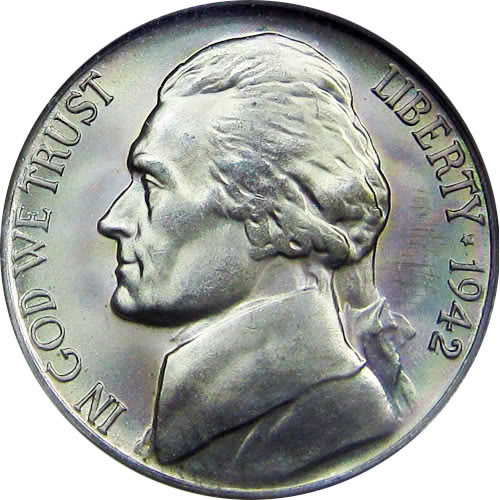 What I’m about to share with you is a perfect combination of both, and just knowing about it makes me feel like I’m connected to Her Majesty’s Secret Service.

Believe it or not, a company called Shomer-tec has created a compass out of…wait for it… a nickel! It’s the first item in a collection that will be invaluable on secret missions I’ll never go on.

If you loop a piece of thread around the groove of the coin and suspend it freely, the “heads” side will always point to magnetic north. It doesn’t matter what angle you start at, or where you move in space.   Jefferson’s head will always show you the way.

Sure, this tiny thing is amazing. But it’s even more impressive when you consider that it partners with the world’s largest object. By this I mean, of course, Planet Earth itself.

In grade school, we learned that the Earth has a magnetic field that attracts the north side of a compass towards the North pole. Something slipped my mind since magnets 101…

I forgot that the North Pole would have to have a magnetic pull of south to make the nickel face it, because of the "opposites" rule.

When you use the nickel compass, North is the only information needed since the other cardinal directions can be derived from it.

Since we were kids, we would call out the 4 directions as “North, East, South, West” and it rolls off the tongue. But in Proto-Indo-European language, “East” was the first and most important direction because that’s where the sun rose from.

I think that just about settles it. All directions actually started out as servants of the east. Take that, other cardinal directions!

But that was then, and this is now, where north is still in charge - though the very idea of north can be confusing.  This is because there are actually 2 north poles:

1) The true north pole is the axis around which the Earth spins.

2) The magnetic north pole is where the dangling nickel's face points to.

Compasses only give a general “top of the Earth” direction; they almost never point to the geographic north pole at all. In fact, the two north poles are about 1200 km apart from one another.

The ridiculous map below will show you how the US is broken up into different values of magnetic declination.

If you lived, for example, in Los Angeles and wanted to be absolutely accurate with your nickel head compass, this map would tell you that you are in the +13 magnetic deflection zone.

The crazy thing is that each year the location of magnetic north changes position.  What that means is that these numbers and lines change as well, making this 2010 map already worthless. For those of you wanting up-to-date magnetic deflection statistics, visit this geomagnetism website. Once there, you can simply type in an address and you'll be good to go.

Or, maybe, you'd rather just stay indoors with your nickel. That’s what I’ve been doing, and I haven’t gotten lost once.

Shomer-Tech describes why this piece of tech was created in the first place:

“This unique new covert compass was inspired by the various escape compasses developed during WWII and issued to Allied airmen and commandos as part of their escape & evasion kits. Unlike standard military compasses, due to specialized requirements, escape compasses were mostly very small and of rudimentary design, had minimal markings, and provided gross magnetic north indication.”

WWII spy pigeons like this one had built in compasses but would have been way too cumbersome for soldiers to carry around in their pockets. The nickel compass would have been a much better option.

But be careful with your new compass because it’s so well made, you’ll likely spend it by mistake – and then what? You’ll probably have to rely on the crappy GPS on your iPhone, and nobody wants that.

While I can’t say the Soomer-Tec nickel has saved my life, it’s a gateway secret agent gadget and I think it’s safe to say what my next one will be.

For when you have no fucks to give, give (these surprisingly well executed) Zero Fucks Given coins. This crazy world is filled with dumb-asses and assholes, and we believe we are greatly outnumbered by them, so we invented/created Zero Fucks Coins as a way to arm the citizens of earth with a way offend and […]