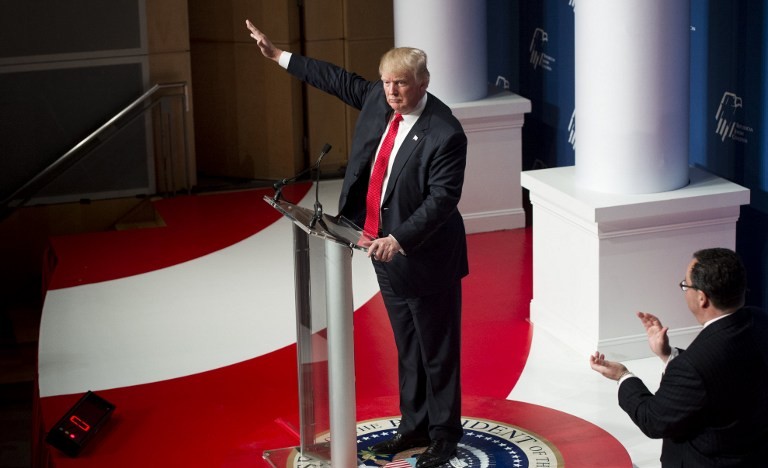 Donald Trump, a Republican candidate for Führer of the United Fascist States of America, said today there should be a “total and complete shutdown of Muslims entering the United States,” including Muslim citizens who are currently abroad.

Today also happens to be the anniversary of the Japanese attack on Pearl Harbor, in Hawaii. As World War II unfolded, many Japanese-American citizens of the United States were forcibly removed from their homes and lives and placed in “internment camps.”

Donald Trump is unhinged. His "policy" proposals are not serious.

The proposed ban of “Muslims,” however you define and verify that identity, would apply to immigrants and visitors alike. It's pretty clearly a violation of the First Amendment.

Here, let me Wikipedia that for you, Donald Trump.

The First Amendment (Amendment I) to the United States Constitution prohibits the making of any law respecting an establishment of religion, impeding the free exercise of religion, abridging the freedom of speech, infringing on the freedom of the press, interfering with the right to peaceably assemble or prohibiting the petitioning for a governmental redress of grievances. It was adopted on December 15, 1791, as one of the ten amendments that constitute the Bill of Rights.

In a tweeted statement, Trump’s campaign said the Muslim Ban should remain in effect “until our country’s representatives can figure out what is going on.”

Unburdened by the need to cite any sources for the pure bullshit it contains, Trump's statement also references hatred felt by “large segments of the Muslim population” toward Americans.

“Until we are able to determine and understand this problem and the dangerous threat it poses, our country cannot be the victims of horrendous attacks by people that believe only in jihad, and have no sense of reason or respect for human life,” Trump said in the statement.

The New York Times spoke to the Trump camp. “Asked what prompted his statement, Mr. Trump said, “death,” according to a spokeswoman.”

@realDonaldTrump Please sir may I have some more demagoguery pic.twitter.com/DXHf2n3EOl

This is reprehensible, prejudiced and divisive. @RealDonaldTrump, you don't get it. This makes us less safe. -H https://t.co/SjAqL0clHd

.@realdonaldtrump removes all doubt: he is running for President as a fascist demagogue.