Harvard Business School: Talented assholes are more trouble than they're worth 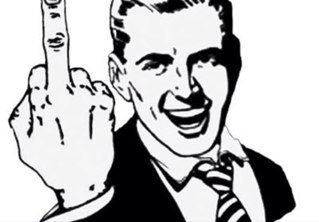 In Toxic Workers , a new Harvard Business School working paper, Michael Housman and Dylan Minor look at the paradox of "superstar" workers who outperform their colleagues by 2:1 or more, but who are "toxic" -- awful to work with and be around.

The connection between toxicity and productivity has been validated in several studies, but the question that Housman and Minor set out to answer is, "are 1%, superstar workers worth the trouble they cause in the workplace?"

Using a clever empirical methodology, they demonstrate that, basically, you shouldn't work with assholes. It's better to hire two average employees than to keep one "superstar" on the payroll, once you factor in the disruption that your talented jerk wreaks on their colleagues.

A good or bad hiring decision is multidimensional (Lazear & Oyer (2007) and Hermalin (2013)).
We have identified several individual and situational factors that lead to a worker engaging in
objective toxic behavior. Knowledge of these factors can be used to avoid and better manage for
toxic workers. However, we also found the need to hire based on multiple dimensions of expected
outcomes: We found that adding the dimension of toxicity can help improve performance by means
of avoiding the wrong kind of highly productive workers that would have been thought a preferred
hire had we not considered toxicity.

We have also discovered some important effects of toxic workers. However, there are surely
additional traits that could be used to identify toxic workers. Similarly, it would be helpful to
know which other environmental factors nudge an otherwise normal worker towards becoming a
toxic worker and possibly creating the preexisting workplace conditions that lead to toxic behavior.
Future research can shed light on these questions. This latter focus seems particularly important,
because to the extent that we can reduce a worker's likelihood of becoming toxic, we are helping
not only the firm, but the worker himself, those around him, and the potential firms where that
employee may work in the future. Since we found some evidence that a toxic worker can have more
impact on performance than a "superstar," it may be that spending more time limiting negative
impacts on an organization might improve everyone's outcome to a greater extent than only focusing
on increasing positive impacts. We have taken a step in exploring this notion and hope that we
witness future progress in this area.