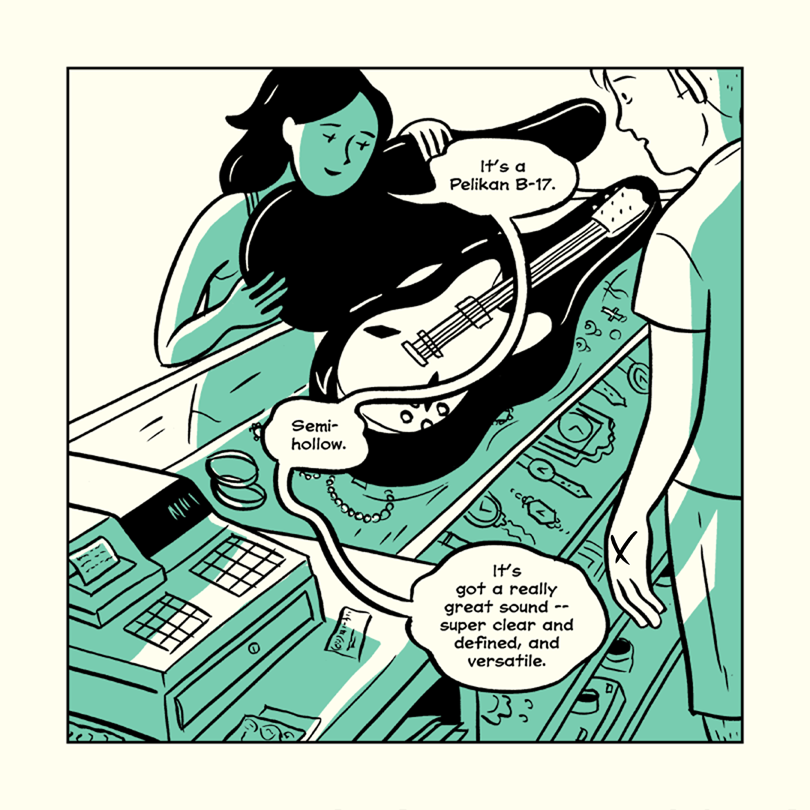 On Saturday, I stopped in at the incredible Comc Arts LA indie comics fest and came away with a staggering double-load of amazing funnybooks, and the standout from that wonderful haul is Hope Larson's "Solo."

You may know Larson from her spectacular adaptation of Madeline L'Engle's "Wrinkle in Time", released to coincide with the 50th anniversary of the YA classic. But Larson has had a rich and varied career apart from Wrinkle, and all of it is outstanding stuff.

Solo is the story of a legendary underground pop due, Junior Twins, whose fans adore them as much for their romantic love as for their indie tunes. But Junior Twins are doomed, because tonight is their last show, the show where they announce that they're getting divorced and going their separate ways. Andy is going to Nashville to record a solo project, and Leah...

...Leah's not sure. Maybe she'll see that guy in Memphis who said he wanted to record her. But to do that, she'll need to get the van on the road, and it's died, leaving her stranded in a Tennessee college town, so broke she has to pawn her guitar, and since Andy got custody of the band's Twitter account in the divorce, she can't even put the word out to the fans at their last show and find a couch to surf on while the parts come in.

Lucky for her, the dude at the pawn-shop is a super-fan, and he lives in a big group-house of semi-marginal millennials, and he's got a crush on Leah that's so huge you can spot it from orbit.

Solo is a serialized rock-n-roll love story that you can read free on Larson's site, but she's anthologizing the strip in small, well-made books that she sells on her website. I read the first two volumes last night before bed and woke up a committed daily reader.

The comic has a soundtrack programmed by Michael Stock, DJ of the Part Time Punks radio show on 88.9FM in Los Angeles.